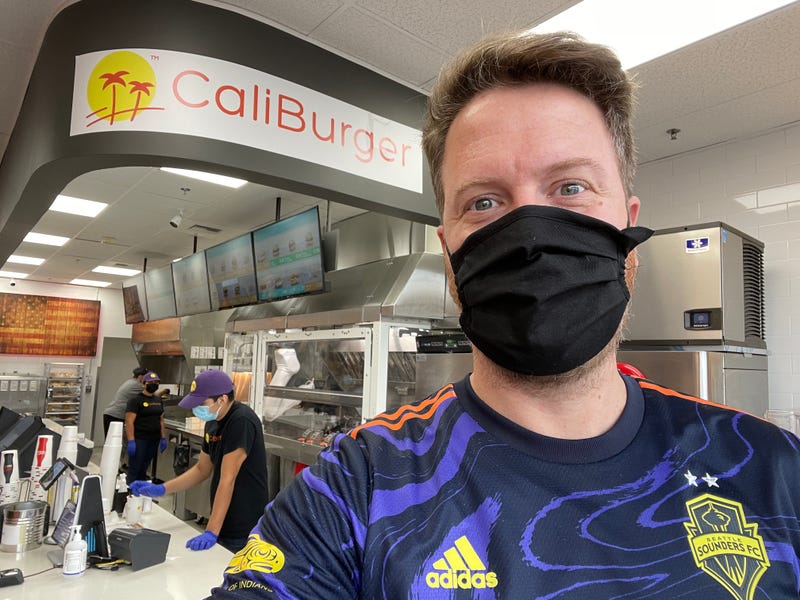 Gregr at CaliBurger in Shoreline Photo credit Gregr
By Gregr

I saw a story on KING5.com about a fast food spot in Shoreline, CaliBurger, that has replaced the terrible job* of fry cook with it's grease burns and terrible post-shift smell, with a potato robot! I needed to investigate.

The local operator of the franchises, Hasan Zeer, was there and excitedly welcoming people to the new shop - they have a few others in Westlake and Alderwood Mall, and he assured me that replacing fry cooks with robots wouldn't lead to any job losses, it just takes away one of the worst jobs at the restaurant and replaces it with a machine.

The robot still doesn't change its own fryer oil, that would make it the real hero, but it will take all the grease pops like a champ without much incident. I asked the owner about Flippy the burger flipping robot and he said there are still efficiency issues to sort out.

In the long run, I can't see how Mr. Zeer would keep paying the same number of people to do fewer jobs, but for now everyone is safe while flippy handles the more dangerous jobs.

*when I say terrible job I don't sweat anyone who does that job, by terrible I mean difficult with the grease pops and gross permeating smell.