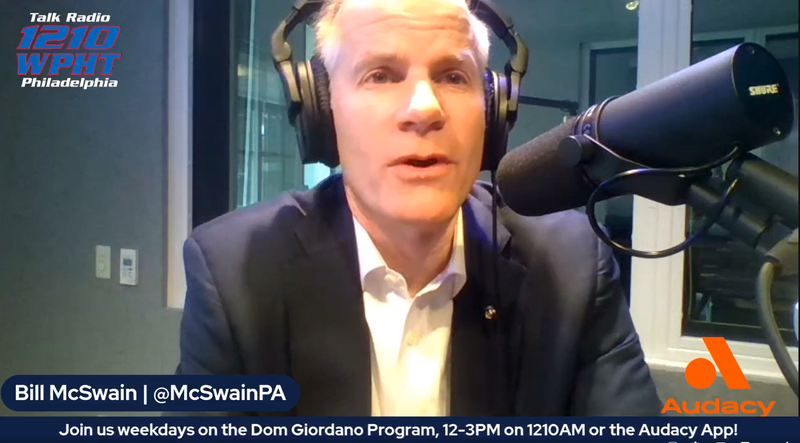 Today, Dom Giordano led off the Dom Giordano Program by welcoming gubernatorial candidate Bill McSwain into the studio for a long-form interview, and to take calls from listeners and voters with concerns about the primary election. Giordano and McSwain discuss a range of issues, including the unprecedented SCOTUS leak centered on Roe v. Wade and the lawlessness in Philadelphia under the reign of Philadelphia District Attorney Larry Krasner. McSwain directly tells what he’d do if elected to office to fix both the crime issue and heightened gas prices, and explains why he’s the candidate that’s most well-suited to win in a general election. To watch, CLICK HERE.

Then, Giordano moves into a conversation centered on the Republican primary for United States Senate in Pennsylvania, telling of an interview that Kathy had with WPHT host Rich Zeoli in which, when pressed about Sean Parnell’s comments about her service, made a comment relating to the former candidates history. Dom asks whether listeners think the comment is out of bounds, and plays back a clip from Dr. Mehmet Oz from Sean Hannity, with the candidate raising more questions about Barnette.

In today’s second hour, Giordano welcomes back Lieutenant Governor Candidate Clarice Schillinger back onto the Dom Giordano Program for an update on the campaign as she reaches the final stretch before the May 17th primary. First, Giordano asks Schillinger about the processes behind electing the Lieutenant Governor, asking Schillinger which candidate she feels most comfortable working with after the general election, instead telling Dom that she’s met individually with each candidate and looks forward to working with whatever gubernatorial candidate she’s teamed up with.
Then, Schillinger and Giordano go through the issues, with Clarice exemplifying her attention to detail, with Dom remarking how that alone would be a benefit to Harrisburg. Also, Clarice tells why she thinks she’s the best option, and tells what she most wants to accomplish if elected to office.

Then, Dr. Mehmet Oz, candidate for U.S. Senate in Pennsylvania, returns to the Dom Giordano Program for an update from the campaign trail as the candidate races down the final stretch before primary day on May 17th. First, Giordano asks Oz about the event this past weekend, with former President Trump coming to Pennsylvania to express his support. Then, Giordano asks Dr. Oz about comments he made last night on the Sean Hannity Show on Fox News, wondering for more information on claims made by Dr. Oz that Barnette was pushing for a statue of Barack Obama in the wake of the George Floyd protest, and showed open support for Black Lives Matter. Then, Giordano asks Dr. Oz why he believes he’s the best candidate to represent Republicans in a general election.

In today’s final hour, Dom spends the majority of the hour prognosticating and forecasting the election. Dom returns to comments made in the race for U.S. Senate levied against Kathy Barnette, asking whether the new attacks disqualify her as a candidate in the eyes of the voters. Also, Dom tells about a boycott of rolls after the owner of Martin’s Potato Rolls showed support for gubernatorial candidate Doug Mastriano. Then, Dom welcomes friend of the show Pastor Bill Devlin back onto the Program, who explains why he, as a combat veteran, still continues to support Kathy Barnette for Senator.