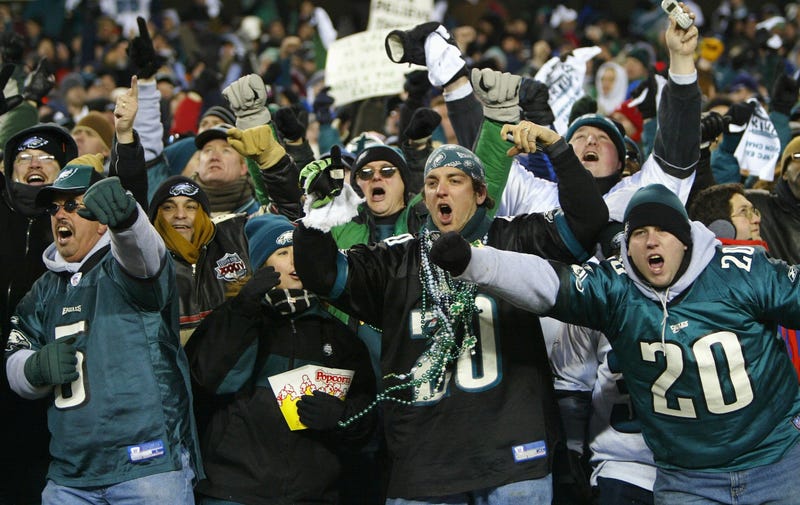 Photo credit PHILADELPHIA - JANUARY 11: Philadelphia Eagles fans celebrate after running back Duce Staley #22 of the Philadelphia Eagles scored on a 7-yard touchdown catch in the second quarter during the NFC divisional playoffs against the Green Bay Packers on January 11, 2004 at Lincoln Financial Field in Philadelphia, Pennsylvania.
By The Dom Giordano Program

Biden Administration Has No Idea How To Address Inflation

Today, Dom led off the Dom Giordano Program by discussing the continued prevalence of inflation in American society, updating the audience on a topic he discussed yesterday, being the shortage of infant formula playing out nationwide. Giordano plays back a clip from Biden administration’s Jen Psaki, who said a whole lot of nothing when pressed on the issue of baby formula, with Giordano lamenting that the administration continues to bumble around while mothers suffer. Then, Giordano updates both the Republican gubernatorial and Senate primary races, telling that he’s posted a poll asking listeners which Senate candidate they’re most likely support, and explains why he thinks Barnette continues to surge. Then, Giordano discusses the continued effort by protestors to disrupt the lives on Supreme Court Justices following the leak centered on a potential reversal of Roe v. Wade, playing back a clip in which Ted Cruz compares the protestors to those who caused peril following the death of George Floyd.

Then, legendary sportswriter Ray Didinger returns to the Dom Giordano Program after announcing that, after an illustrious 53 years covering Philadelphia sports, he will retire at the end of May. First, Giordano and Didinger discuss the decision, with Ray revealing that this was made after long thought and discussion between him and his wife, and his good friend and cohost Glen Macnow. Then, Didinger tells about the many years he’s spent covering Philadelphia sports, revealing the moment he was most happy to witness, and telling of his biggest disappointment throughout the years.

In today’s second hour, national political analyst Salena Zito returns to the Dom Giordano Program to break down the Pennsylvania senate and gubernatorial primaries. First, Zito offers her general thoughts on the battle, discussing the strength of Democratic frontrunner Josh Shapiro. Then, Giordano takes Zito through individual candidates, spending a chunk of time talking about gubernatorial candidate Doug Mastriano, who Zito recently wrote would cost the GOP both the House and Senate in Pennsylvania.
Then, Zito and Giordano run through the issues most important to voters, with Zito explaining that inflation continues to be the primary issue holding the Pennsylvania voter’s focus.

Then, Dom switches back to the topic of inflation, playing back clips from a press conference held today by President Joe Biden, in which he compared his solution to Republican solutions, refusing to take blame for any of the heightened prices, instead pushing the blame onto MAGA Republicans and Russia. Then, in Dan Time with Dom, Dan tells about the record-setting analyst contract signed by Tom Brady, with Giordano offering whether he thinks Brady will be a successful broadcaster.

Who Speaks for Kensington?

In today’s third hour, Guy Ciarrocchi returns to the Dom Giordano Program to discuss his decision to run for United States Congress against Mary Gay Scanlon, a congresswoman who has been on the forefront of propagating hyper-progressive policies. First, Guy comments on the issue most important to Pennsylvanians, being the topic of inflation, telling of the negative effects imposed by policies set forth by the Biden administration.
Then, Guy and Giordano switch into a conversation centered on education, discussing the decision by Governor Wolf and the Biden administration to close schools, telling of the negative implication of Coronavirus policies on local schools.

Then, Giordano and Dan return to a topic they discussed in the first hour, telling of a horrific car crash at a SEPTA station in the Kensington section of the city, with a car killing pedestrians after traveling over 100 mph down city streets. Giordano and Dan discuss the state of Kensington, with Giordano upset that the City has seemingly turned the section into a real-life equivalent of Hamsterdam from the Wire, allowing crime to persist with no regard for those who have to live through it. Giordano tells what needs to be done for things to change, and pontificates why Democrats continue to turn a blind eye to the happenings in Kensington.