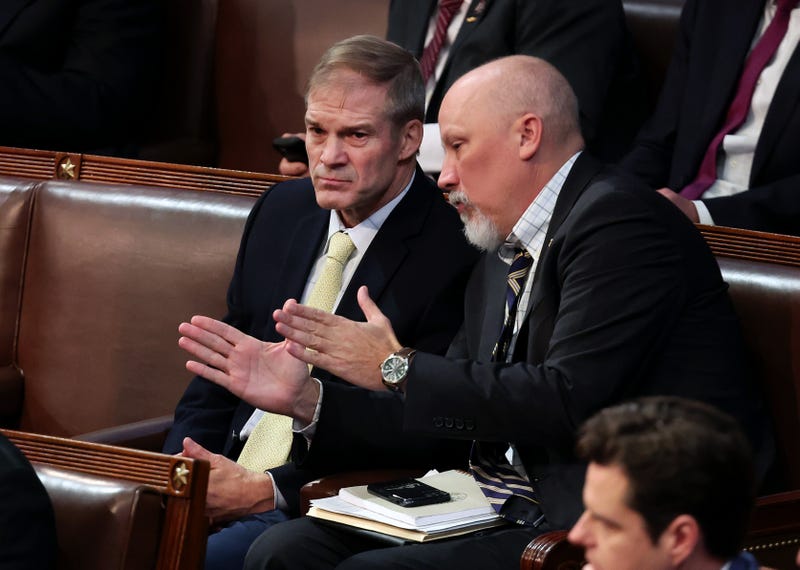 Today, Dom leads off the Dom Giordano Program by offering his thoughts on what unfolded late Friday night as Congress determined their new Speaker of the House, revealing what the Freedom Caucus received in the form of concessions for eventually voting ‘present’ rather than against McCarthy. Giordano notes that he believes they made some great gains here, right down to the wire, particularly centered on an investigation into Federal law enforcement agencies such as the FBI and the CIA. Then, Dom brings back a topic that’s personally affecting him from last week, providing the next chapter in the saga against bike lanes after his parking spot was randomly changed into a protected bike lane.

Rep. Jim Jordan Checks In After Contentious Week Deciding Speaker of the House

Then, Dom welcomes Congressman Jim Jordan back onto the Dom Giordano Program after a contentious week on the House Floor as Representatives decided their choice for next Speaker of the House. After a back and forth between Republicans and the new ‘Freedom Caucus,’ lawmakers decided to vote Kevin McCarthy into the role. First, Dom asks Jordan about the dustup that occurred just prior to the confirmation vote, with Jordan condemning it but saying that sometimes, the instrumentations of Democracy are messy. Then, Giordano asks Jordan about the repeated nominations that he received to become the next speaker, with Jordan telling why he was against the notion, instead expressing the importance of his role on the House Judiciary Committee and the threat that hyper-progressive policies pose to the Country. Then, Giordano and Jordan move into a conversation centered on what we as voters can expect from the House Judiciary Committee, with Jordan telling of the critical nature of investigating and holding the FBI accountable.

In today’s second hour, Dom Giordano leads off the hour by announcing that today is Law Enforcement Appreciation Day, explaining why we need to do a better job of framing police in a positive light. Then, after touching upon the side topic again, asking who has a weak or strong handshake, Dom offers up a story in the realm of sports, reading back a column in Scientific American by a Duke Professor that argues that black players are disproportionately affected by NFL violence because they’re forced into the most dangerous positions.

Then, Dom welcomes in Kathy Barnette, former Senate candidate in Pennsylvania, back onto the Dom Giordano Program to gather her thoughts about what went down between Republicans and the Freedom Caucus as congressional members voted for their next Speaker of the House. Kathy explains how this reflected on the rest of the Republican Party, telling of the changing dynamics in what voters want and the turbulence that comes with that as a Party decides what’s best for them moving forward. Then, Dom and Barnette move into the realm of schools and education, with Barnette revealing her next form of political activism as she hopes to assist candidates for school boards as progressives continue to force their political will onto unsuspecting students.

In today’s third hour, Dom welcomes Dr. Marty Makary of Johns Hopkins and author of The Price We Pay: What Broke American Healthcare and How to Fix It, back onto the Dom Giordano Program to preview what to expect in the upcoming ‘Fauci files,’ as promised by Twitter owner Elon Musk. After being asked whether the league will change anything, with Dr.
Makary noting that while he hopes something will change with this, most of this suspect information is already out there. Then, Giordano and Makary discuss the overbearing censorship during Coronavirus, then moving into a conversation centered around Buffalo Bills player Damar Hamlin, who collapsed on the field. Dom asks Dr. Makary about the possibility that Hamlin’s horrific event was related to a Coronavirus vaccine, with Dr. Makary telling that while chances are the event was unrelated by the vaccine, it’s worth looking into, which is the opposite opinion of Dr. Fauci who outright dismissed the suggestion.

Then, Dom moves back into a conversation centered on what he’d like to see out of the new Congress, asking listeners whether they’ve had it with the excess spending out of Washington. Jerry in Wilmington calls in, asking Dom if he watched yesterday’s 60 Minutes, with causes both Dom and Jerry to call out 60 Minutes host Leslie Stahl for her biased ‘Final Minute’ that called Republicans embarrassing for the lengthy Speaker vote.