As Chiefs fans watched their team go head-to-head in an exciting clash with the Saints, a secret to their team's success seemed to have been revealed on the sideline: what was the magical fluid that Tyreek Hill was drinking that resulted in his freakish speed?

Was it some sort of radioactive formula? Was it some insane blend of powerful nutrients that kicked him into second gear? Could it possibly have been a little bit of booze? 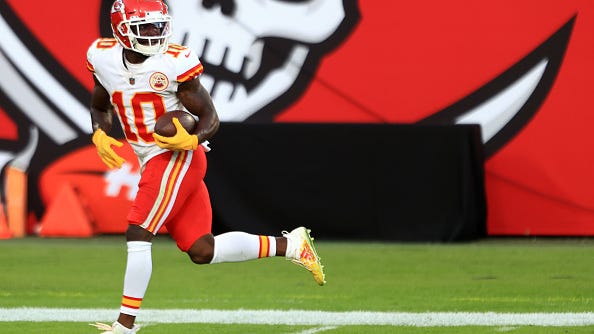 "That was the ol' pickle juice, man," said Kansas City Chiefs quarterback Patrick Mahomes in his weekly interview on "The Drive" on 610 Sports Radio in Kansas City. "You know, he was cramping up a little bit, so you gotta give him the pickle juice to get him back to the 'cheetah,' you know what I mean?"

He added, with a laugh, that he wasn't quite sure why he was drinking it in the somewhat odd style that's pictured above.

As co-hosts Carrington Harrison and Sean Levine noted, last week we had Lamar Jackson's cramping, and now Tyreek Hill's... it seems like devastating speed comes with an unfortunate downside.

But it's not only reserved for the fastest guys on the field. In fact, it's quite a common substitute for electrolyte-rich drinks like Gatorade that some athletes seem to prefer.

"There are a lot of athletes that swear by it—they don't care exactly how it's working," said U.S. Olympic Committee senior sport dietician Alicia Glass (via SI.com). "As evidence-based practitioners, we would like to know exactly what it is before we start recommending it."

That group of athletes includes Mahomes, himself.

"I've drank it since high school, actually, so it's like a little shot," Mahomes said. "Just got to knock it to the head and not try to taste it as much as possible."

I have actually used pickle juice to completely eliminate the bad taste from shots of alcohol, so I'm aware of just how potent a taste it can be. It probably shouldn't come as a huge surprise that Mahomes can handle the strong taste, though — any one who puts ketchup on his Thanksgiving turkey has some questionable preferences in the world of food.