CHICAGO (670 The Score) -- The previous ritual of celebrating in Club Dub left the Bears as first-year coach Matt Eberflus began working to change the team’s culture. He wants to celebrate victories but also demands a business-like demeanor from his players, so the strobe lights that former coach Matt Nagy brought in are collecting dust somewhere.

After the Bears earned an uninspiring 23-20 win over the Texans on Sunday, there was a palpable silence in the home locker room in the northwest corner of Soldier Field. The Bears were satisfied that they responded from a lopsided loss to the Packers the prior week and moved to 2-1 on the season, but they also recognized the need for considerable improvement.

“That’s just where we are,” Eberflus said. “We’re in the developmental stage. We want to improve every single week and get better. And it’s certainly good to do when you win the game too.”

In facing Texans coach Lovie Smith, who led Chicago from 204-'12, the Bears seemed to pay tribute to that era of football – by running the football, forcing turnovers and doing whatever it takes to win.

“We just try to find any way we can to win, and that’s what we were able to do today,” said running back Khalil Herbert, who rushed 20 times for 157 yards after starting running back David Montgomery left with a right ankle/knee injury. 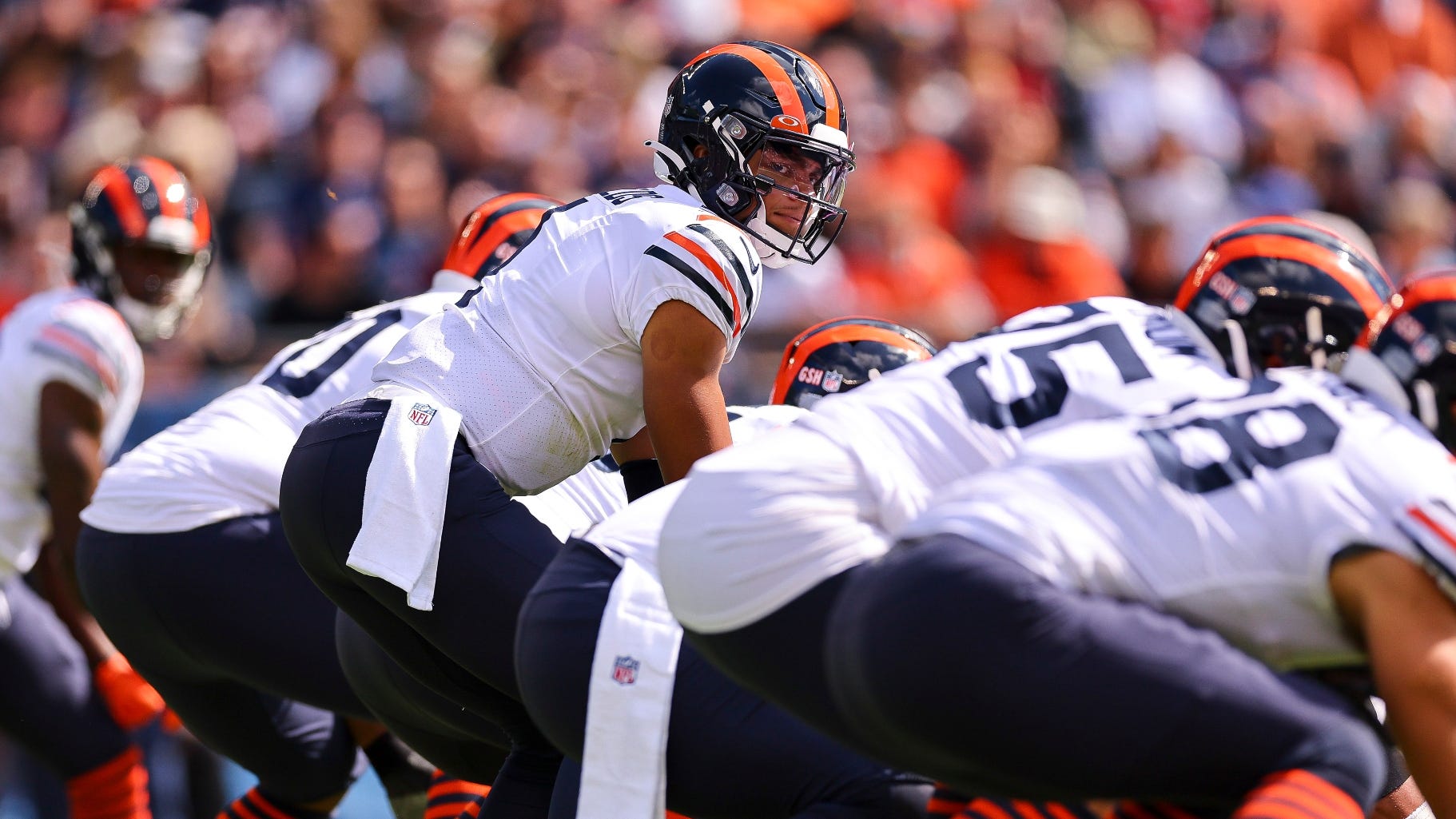 After each of the Bears’ three games this season, Eberflus has reminded his players of the 24-hour rule. He hopes they relish a win or let a loss sting for that time period, then he wants them to refocus as they get back to work.

Fields will have a lot to digest across his next 24 hours. He was 8-of-17 for 106 yards and two interceptions Sunday. After a personally difficult week for Fields – who had to answer for the Bears' lack passing production after the loss to the Packers and also clarify a comment about the fan base that was taken out of context – his latest performance didn't do anything to offer confidence.

Fields planned to review the film from the game Sunday night instead of waiting for Monday afternoon at Halas Hall.

“Straight up, I played — I want to say the 'A' word, but I’m not going to do that," Fields said. "But I just played like trash. I played terrible. Really, I just got to be better.

"I played terrible. I'm going through the film tonight, see what I could've done better. Get better for my teammates.

In the modern NFL, results are often based on the play of each team's quarterback. On Sunday, the Bears won despite Fields' struggles.

While this is a developmental season for the Bears, there's also pressure on Fields to produce in his second NFL season. The No. 11 overall pick in the 2021 NFL Draft, Fields arrived in Chicago with hopes that he could become a franchise quarterback.

During the second quarter Sunday, the Bears elected to run a draw play on a third-and-6 from deep in their own territory. Fans at Soldier Field let out loud boos focused on that play-calling decision. Later in the game, the crowd reactions were filled with moans and groans over curious throws by Fields. Many have now realized the Bears’ coaching staff doesn’t have full trust in its quarterback.

But it wasn't just Fields who made miscues Sunday. Eberflus' defense had some holes in it, and it wasn't MVP quarterback Aaron Rodgers at the helm of the Texans' attack. Houston quarterback Davis Mills hit seven throws of 15 yards or more against Chicago's defense, including a 52-yard completion to receiver Chris Moore during the first quarter.

The Bears also allowed a fake punt to be converted by the Texans during the third quarter, which allowed Houston to continue on a 14-play scoring drive that resulted in a game-tying field goal.

Despite the multi-faceted breakdowns, the Bears still found a path to victory.

As the Texans looked to drive for the go-ahead score late in the game, Bears defensive lineman Angelo Blackson tipped a pass by Mills and Smith swooped in for the interception.

After three plays forced the Texans out of timeouts and ran the clock to three seconds, the Bears set up Santos for the game-winning field goal. From there, a reserved postgame celebration soon began for a team that knows there’s plenty to improve on.

“We’re going to celebrate for 24 hours that we won the game,” Eberflus said. “We’re all excited about it.

“When 24 hours is up, we’ll move on to the next game and learn from each performance.”