Following the 2020 season, it appeared the Raiders would stick with Carr going forward, but with the sudden availability of Texans star Deshaun Watson, the Raiders plan to field calls from teams about Carr’s availability, according to a Las Vegas Review-Journal report. The Raiders could be looking for two first-round picks in exchange for Carr in an effort to flip those to the Texans as part of a package for Watson, the report said.

That may seem like a high asking price for Carr, but it might not be unreasonable considering he's coming off a career year and the Lions just acquired two first-round picks, a third-round pick and quarterback Jared Goff in exchange for sending quarterback Matthew Stafford to the Rams.

Carr and Stafford had similar numbers in 2020, and Carr is three years younger at 29. He’s also carries a $22-million cap hit for next season and $19 million in 2022, per Overthecap.com, a bargain for a quarterback of his age and ability.

In a hot quarterback market, many teams may look to pay the price for the veteran Carr, who led the seventh-best passing offense, via yards per game, last season. 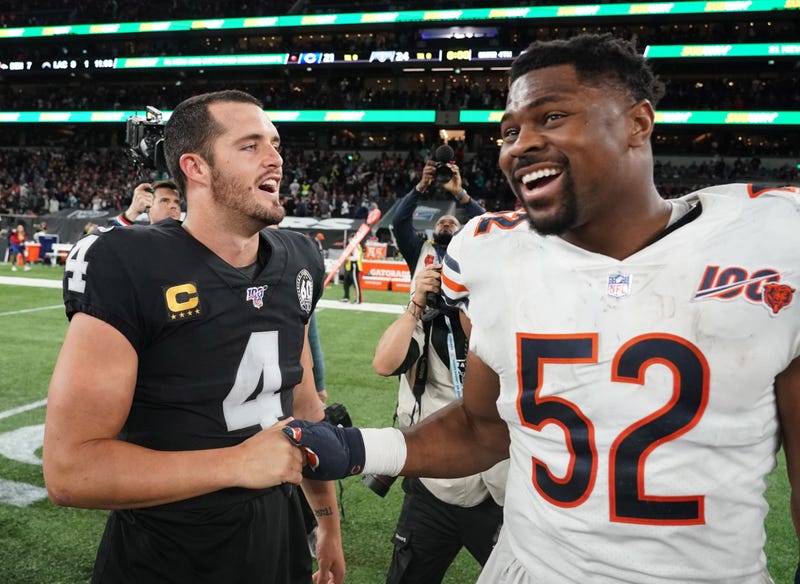 Mitchell Trubisky is a free agent and Nick Foles can't stay healthy, so the Bears will likely look for a new quarterback this offseason. Carr is an instant upgrade over either of those two.

The Bears may be willing to offer two first-round picks as well, considering they won't be in position to nab one of the top quarterbacks in the draft as they select at No. 20. Parting with the second first-rounder would be a tough choice, but the Bears are already a playoff team. Making the move for Carr would improve the offense at the most important position.

Carr has never made the playoffs in his career, but he’s also lacked a team that has had a good defense. The Raiders went 8-8 last season with the 30th-ranked defense in the NFL. The Bears defense is much better, and Chicago would become a much more complete team with the addition of Carr. 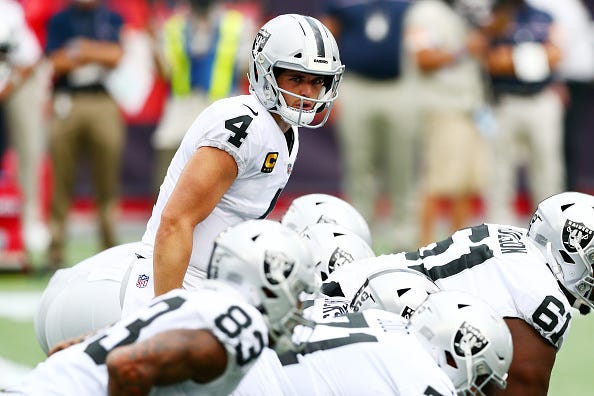 The Patriots learned what life was like without Tom Brady this past season, going 7-9 and finishing third in the AFC East. The Cam Newton experiment didn't work out, and it's hard to see the Patriots bringing him back.

Carr, on the other hand, is much less of a gamble than Newton. Carr has missed one game in his seven-year career and has thrown for at least 4,000 yards in each of his last three seasons.

The Patriots would be right back in the thick of the AFC East race with Carr, although it would almost certainly cost them the No. 15 overall pick in upcoming draft and possibly their first-rounder next year as well. The No. 15 pick may be the highest possible selection the Raiders could get from potential suitors. 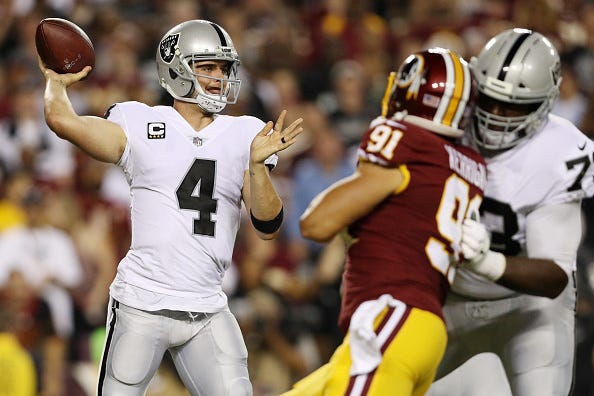 Washington had its own quarterback carousel in 2020 and needs to find one to settle down with for next season. The Football Team barely won the NFC East at 7-9, but adding a veteran, dependable quarterback would help take them to the next level. If Carr joined Washington he'd arguably be the best quarterback in the division – pending a healthy Dak Prescott return.

The Football Team holds the No. 19 overall pick in this draft, but they also have two third-rounders this year if they want to sweeten the pot. That said, the Football Team was interested in Stafford but was unwilling to part with the second first-rounder in the Lions’ asking price, according to reports.

If Washington views Carr as equal to or less than Stafford, it may be hard to envision them going the distance to acquire him. 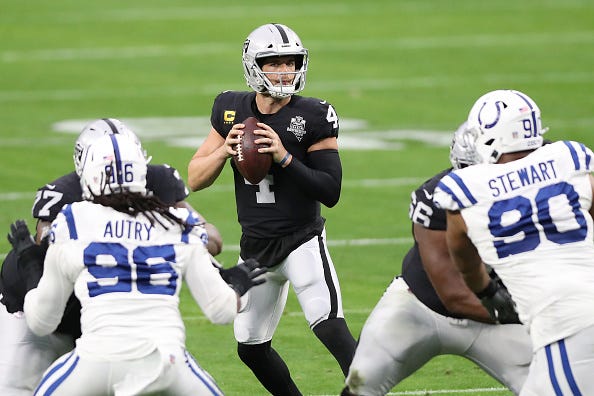 The Colts are one of the most intriguing quarterback-needy teams in the league. With the retirement of Philip Rivers, the Colts are a bonafide playoff contender that just needs a quarterback.

Like Washington, Indianapolis was in on Stafford, but reports indicated the Colts also weren't willing to part with a second first-round pick. Carr on the Colts would be fun to imagine. He would work behind perhaps the best offensive line in the game and under the tutelage of coach Frank Reich. 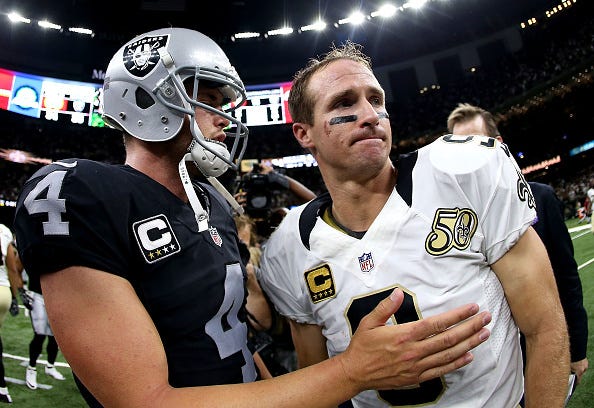 Saints coach Sean Payton has talked up the world when it comes to Taysom Hill and Jameis Winston, but if Carr is available, New Orleans shouldn't be counted out just yet.

With Drew Brees likely retiring, the Saints will need a quarterback capable of leading them to the playoffs. While Carr has never been in the playoffs, he has the most experience and reliability of the aforementioned quarterbacks.

The question is whether the Saints would be willing to part with their draft picks for Carr. 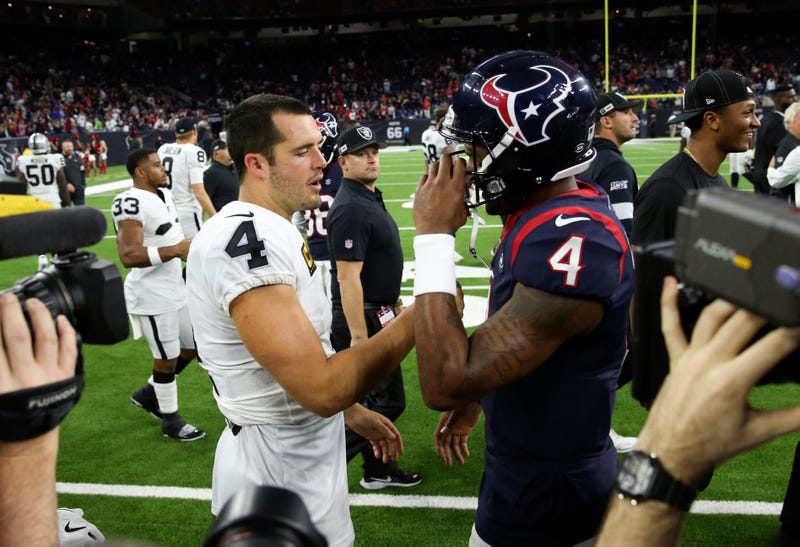 While the reports of Carr’s availability is for the Raiders to position themselves to make a run at Watson, what if they just included Carr in a deal of their own? If the Raiders can't find a suitor for Carr, perhaps they would go straight to the Texans to see what it would take if they included Carr in a package for Watson?

It would mean giving up at least two first-rounders and possibly more draft capital -- and maybe even another player. It's probably the unlikeliest of the aforementioned scenarios, but the Texans will need a quarterback once Watson is dealt and adding Carr would solve that dilemma.