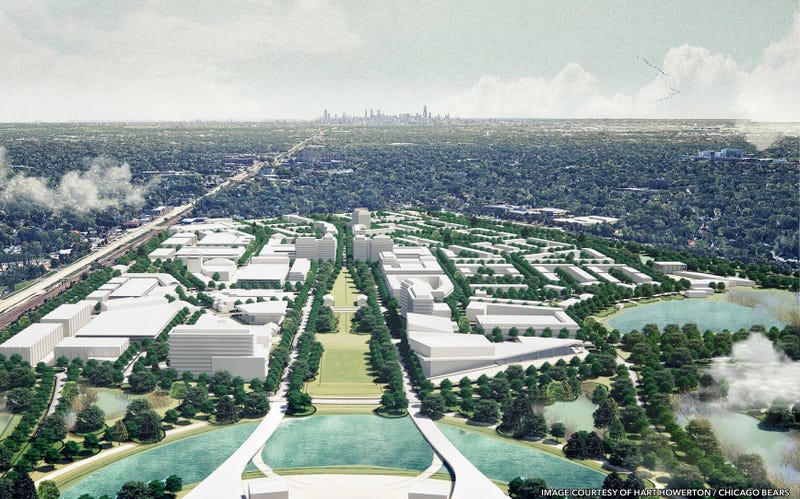 This is a preliminary master plan vision, with an aerial view from the west, of the Bears' proposed stadium development in Arlington Heights. Photo credit Hart Howerton/Chicago Bears
By WBBM Newsradio Staff Report

ARLINGTON HEIGHTS (WBBM NEWSRADIO) -- The Bears’ plan to build a new stadium in Arlington Heights remains on track after a vote at a village board meeting Monday evening went in their favor.

Arlington Heights mayor Thomas Hayes and the village trustees officially rejected the Americans for Prosperity political group’s petition by a 9-0 vote. The group had proposed that the village ban "offering or extending any financial incentive to any business or corporation to operate in the village," which in this specific case would be the Bears receiving public funding from Arlington Heights taxpayers for the construction of the stadium development. The Bears have announced they won't use public funding for the stadium itself but want to build a multi-purpose entertainment district around it.

The trustees defended the use of public financing as tools in their economic development toolbox, the Daily Herald reported.

The Americans for Prosperity group isn't giving up however. It announced it will start another petition in hopes of getting enough signatures to create a referendum. A petition needs signatures from 12% of registered voters or 6,500 people to reach a referendum on the ballot, according to Arlington Heights village code.