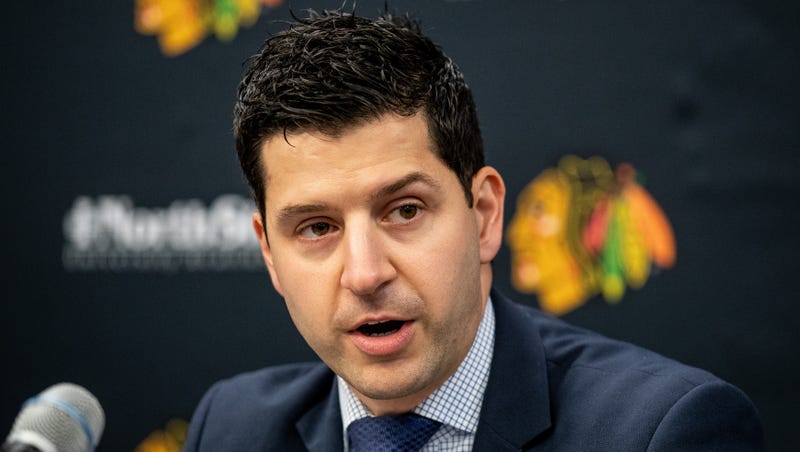 CHICAGO (AP) — The more Chicago Blackhawks CEO Danny Wirtz examined the possibilities for the team's opening at general manager, the more he felt he had what he needed in his own organization — even with the club's recent struggles.

The Blackhawks hired Kyle Davidson on Tuesday, dropping his interim tag instead of going outside the floundering franchise for new leadership.

“If you know Kyle ... you'll realize that he's his own person,” Wirtz said. “He has his own philosophies ... (It) is quite an advantage, to be both a fresh thinker and a open-minded thinker, but also understand our starting point very expertly. So you kind of get the best of both worlds in that sense.”

The GM job is another step in a rapid rise for the 33-year-old Davidson, who joined the Blackhawks as a hockey operations intern in 2010. The Sudbury, Ontario, native has held several different titles with the organization over the years, including work as a video analyst, hockey operations manager and assistant GM. He oversaw the team’s salary-cap management before he was elevated to the interim GM job.

But the franchise has made just one postseason appearance in the last five years. After beginning this season with playoff aspirations, it is seventh in the Central Division with a 19-27-8 record.

Davidson was in the team's front office throughout the whole downturn, working for Stan Bowman. But he almost made it sound as if he was a newcomer while discussing his plans for the organization.

“It's going to be a very broad change in philosophy because I'm a new person that's coming in with some strong beliefs on how we should move forward,” Davidson said.

Davidson, who was born with a congenital heart defect, leading to three open-heart surgeries, also didn't mince words when it comes to the team's direction.

In the end, the organization settled on a familiar figure.

“I’ve told people before. When I leave a meeting with Kyle, I feel better,” Wirtz said. “I feel more assured. I feel more confident, and I think that’s a feeling that hopefully everyone here and the fans can start to sense as well as they really understand Kyle’s plan going forward.”

Davidson was elevated to the interim job after Bowman resigned in October in the wake of a report by an outside law firm that found the organization mishandled allegations that an assistant coach sexually assaulted a player during the team’s Stanley Cup run in 2010.

The report also played a role in the departure of Al MacIsaac, another of Chicago’s top hockey executives, and the NHL fined the team $2 million for “the organization’s inadequate internal procedures and insufficient and untimely response.”

Two lawsuits related to Kyle Beach’s allegations that he was assaulted by then-video coach Brad Aldrich in 2010 were resolved in December.

Davidson made his first big move on Nov. 6, firing coach Jeremy Colliton and giving Derek King the job on an interim basis. Davidson said King has done a fantastic job and the former NHL forward will be considered for the opening.

“He's getting a first-hand practical interview, just like I got in my role,” Davidson said, “and so that's an advantage, and I think he's doing very well in that position.”

The next big task for Davidson is making the most of the March 21 trade deadline. The Blackhawks traded their 2022 first-round pick to Columbus in the Seth Jones deal in July, and they would love to recoup that lost draft capital.

Goaltender Marc-Andre Fleury, defenseman Calvin de Haan and forwards Dylan Strome and Dominik Kubalik are among the Blackhawks who could be on the move.

“We'll just evaluate what's available to us,” Davidson said. “I don't think it's any secret where we are in the standings, and so if there's an opportunity to acquire some future talent and augment what we've got in our prospect pool or our draft asset pool, then we'll explore that.”