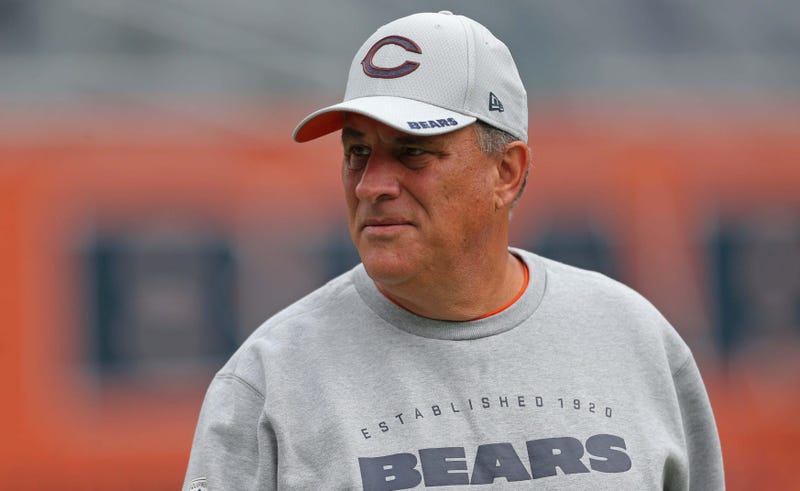 (670 The Score) Working for John Elway means that for Vic Fangio, that long-sought position of NFL head coach only comes with so much power.

The former Bears defensive coordinator finally has his shot to run a team, hired as head coach of the Denver Broncos in January, but it looks like his philosophy will take a backseat to his immediate superior's characteristic impatience. Contrast one's words with the other's subsequent actions this week to see what I mean.

Fangio gave a wide-ranging interview to Woody Paige of the Colorado Springs Gazette on Monday in which he described his preferred approach to filling needs on the Broncos' roster in a way that shed light on why his former team remained mired in last place.

"What we've got to do, I believe, is let's go out there and evaluate this team, find out where we need help," Fangio said. "Make some good choices for the future, not just for today, if I'm making sense. I'm not looking to go 4-12 or 5-11, thinking that we're rebuilding. But we must realize that two years from now, three years that what we did in the 2019 season was why we are at that point."

"Here's what happened to the Bears before I got there," he continued. "What they were doing was putting Band-Aids on every little problem, hoping they would be a good team the next year. By the time we got there, they sucked. We can't let that happen here. We can't do everything to just get to 8-8 now and be 3-13 in 2021."

Applying this logic to the quarterback position, Fangio said: "Do we go for a high draft choice and find out he's not what we'd hope he'd be or throw a ton of money for somebody (a veteran) and he turns not to be worth it? We have to be smart."

And with that, Elway on Wednesday agreed to trade a 2019 mid-round pick to Baltimore for quarterback Joe Flacco. The deal won't become official until the start of the league new year in March. We're not sure how Fangio felt about it, but it sure seems to fit the description of trying to be 8-8 now.

NFL Network insider Ian Rapoport appeared on 670 The Score on Thursday and explained.

"Case Keenum is probably miscast as a starter," Rapoport said on the Bernstein & McKnight Show. "This year it was, 'We wouldn't like to put a Band-Aid on it, but if we don't see that there's a franchise quarterback where we're going to pick at 10, we have to get someone who's better than Case Keenum.' It's why they're not going to take a quarterback this year, and it's why they're probably going to be in the same exact position next year."

Which was precisely what Fangio just said he wanted to avoid doing and why. Because it's just not his decision to make.

"Vic is not the general manager," Rapoport said. "John Elway is the general manager, and he has shown during his time in Denver that he runs the show. He makes the calls for better or worse on the quarterback position, who gets to continue to be the head coach, everything. So what John Elway wants, that's what happens."

Most modern GMs work collaboratively with coaches, presenting a united front at least outwardly to make sure the objectives and timetables for judgment are shared and clear. That's not the case in this situation, not if we really listen to Fangio's strongly expressed preferences.