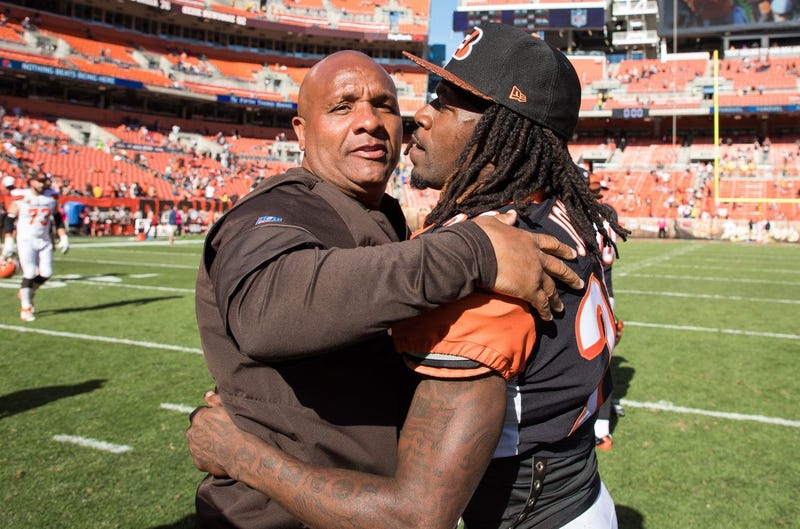 “As you guys know, John [Dorsey] and the personnel group are always trying to uncover talent and uncover guys that can play,” Jackson said. “Obviously, there is an opportunity to continue to look at guys so I am sure we will bring them in and take a peek at him.”

Jackson is familiar with Jones from the years he served on the Bengals coaching staff,

On Wednesday, Dorsey hinted that he may seek additional depth at cornerback.

"We’ll look at all options and talk and have free discussion about possibilities here," Dorsey said. "We have got two roster spots we can fill. The question is here do I want to use it at the receiver position for legs? Or the stress points of training camp we all know are receivers and corners. Do we add an additional corner? These are things you have in the discussions."

Jones, who has racked up 16 interceptions in 11 seasons and is 34 years old, comes with a lot of baggage including a history of problems off and on the field. He’s had numerous run-ins with law enforcement and has been fined and suspended by the league multiple times.

The Bengals declined to pick up the option on his contract in March.

Dorsey and the Browns spent the offseason rebuilding the secondary by trading for safety Damarious Randall, signing Terrance Mitchell and EJ Gaines and drafting Denzel Ward and Simeon Thomas.

Where's Corbett – Where Austin Corbett will play is one of a few mysteries that hopefully will be solved during training camp.

Future Hall of Fame left tackle Joe Thomas doesn’t feel Corbett, who was selected in the second round – 33rd overall in the draft, is an NFL tackle and is instead better suited to be a guard or center. He said as much in an interview with NFL.com’s Nick Shook earlier this week.

Jackson has yet to come to the same conclusion as Thomas, who made 10 straight Pro Bowls and played 10,363 consecutive snaps at the position.

“I think [Corbett] is an offensive lineman who has versatility that can play on the edge, can play inside and we’re going to find out where is going to be the best place to play him once we put these pads on [Saturday],” Jackson said.

“I don’t think we’ve given up on anything. I think it’s too soon. I think we need to get the pads on and watch guys compete and kind of go from there.”

Dynamic duo – If you're wondering what the Browns offense is going to look like without Josh Gordon, here's a hint: Tyrod Taylor to Jarvis Landry.

The 2 hooked up on multiple occasions during 11-on-11, including on a beautiful deep