GATES MILLS, Ohio (92.3 The Fan) – Coming off their best season in over a quarter century, expectations for the Browns are sky high in 2021.

“That excitement is building up, everybody can feel the energy,” quarterback Baker Mayfield said Tuesday while hosting over 300 kids at his youth football camp at Gilmour Academy.

Mayfield, who bounced back from a tumultuous sophomore campaign that resulted in a third coaching change in as many offseasons to lead the Browns back to the playoffs for the first time in 18 years and win their first postseason game in 26, is laser focused on the road directly in front of him and the Browns this fall.

“We have to start fresh,” Mayfield said. “We have to keep that foundation and build on those blocks we’ve already laid down. Nothing is going to be given to us. We have to earn it.”

In his 2014 return letter published by Sports Illustrated, LeBron James said, “In Northeast Ohio, nothing is given. Everything is earned.” Two years later, James delivered on his promise and brought an NBA championship to Cleveland, ending the city’s title drought after 52 years.

Like James at the time, Mayfield hasn’t promised a championship. But it’s no secret that is his goal.

The Browns, who celebrate their 75th anniversary this year, haven’t won a title since 1964 and they are one of four franchises to have never made a Super Bowl. They haven’t even won a divisional crown since 1989.

At the 2018 NFL Combine Mayfield declared he was the player that could turn the NFL’s laughingstock into a contender. He’s delivered, but the job is not done, and he understands that it won’t be if he’s still taking a bow for 2020. 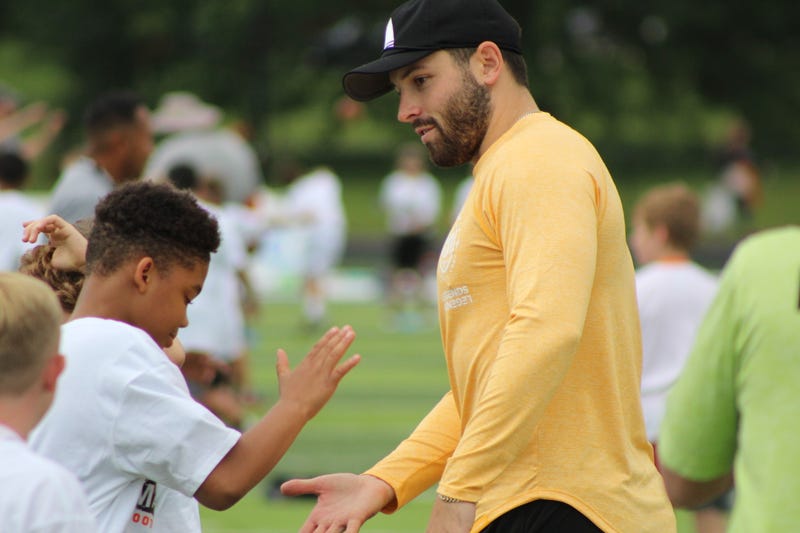 Prior to Mayfield’s arrival as the No. 1 overall pick in 2018 the Browns literally didn’t win a game, going 0 for the 2017 season. Three years later the Browns finished 11-5, their best regular season mark in the expansion era and best campaign since 1994.

Mayfield is 24-23, including the playoffs, since applying the brakes to the once never ending QB carousel in Cleveland.

For the first time since being drafted, Mayfield returns with the same coaching staff and offensive system in place. A bonus – the entire starting offensive unit returns too – giving him and his teammates confidence heading into what should be an exciting year.

“Going into minicamp I think all the coaches and the players saw that I was way more comfortable in the system again,” Mayfield said. “Not to say that we’re going to start off right where we left [off], but that’s always the goal, to improve and continue to build on what we have.”

Aside from expectations of an even better season after EVP/GM Andrew Berry took a blowtorch to the defense and rebuilt that side of the roster this offseason, another storyline that will hover over the team is the fact that Mayfield is in line for a contract extension.

The team exercised his fifth-year option worth $18.8 million in the spring, but a few things could impact how quickly a new deal gets done.

Running back Nick Chubb is entering the final year of his rookie contract and cornerback Denzel Ward, selected three slots behind Mayfield in 2018, is also eligible for an extension. Buffalo’s Josh Allen and former NFL MVP and Ravens QB Lamar Jackson – both in Mayfield’s draft class – are also in line for extensions and they could impact his market value.

Mayfield remains consistent in his approach to dealing with the questions about his future.

“I genuinely mean that I’m about winning, and I think everything will play itself out,” Mayfield said. “I’m not worried about it at all because if we win, we’re heading in the right direction.”

Like that championship, Mayfield's extension will also be earned.