The forecast in Buffalo is calling for feet, not inches of the white stuff leading up Sunday’s game with the Bills and the Browns aren’t complaining one bit.

“I'm used to it, I like it,” cornerback Denzel Ward, who grew up in northeast Ohio, said.

Quarterback Jacoby Brissett is no stranger to playing in snow in Buffalo back in 2017. He enjoyed everything about the experience, except the final score.

“I’ve played up there when it was snow,” Brissett said. “I don’t want to talk about the results of the game.”

Brissett and the Colts lost that game 13-7.

Running back Nick Chubb, who grew up in and played at Georgia where it rarely snows, has always wondered what playing in one would be like. Sunday, it appears he will find out, assuming the game does not get moved.

“I never had a snow game, even though I've been in Cleveland for five years. There's a little bit of excitement in there.”

So how does one prepare to play in the white stuff, especially a quarterback?

“I’m from Florida…I wouldn’t know,” Brissett said. “I’m the wrong person to ask. I really won’t think about it.”

Ironically, the last time the Browns played in a true ‘snow bowl’ blizzard was 2007 against the Bills in Cleveland. The field was blanked with snow. Groundskeepers used brooms, shovels, leaf blowers – anything they could get their hands on to uncover the sidelines and yard lines that cross the field during every timeout. 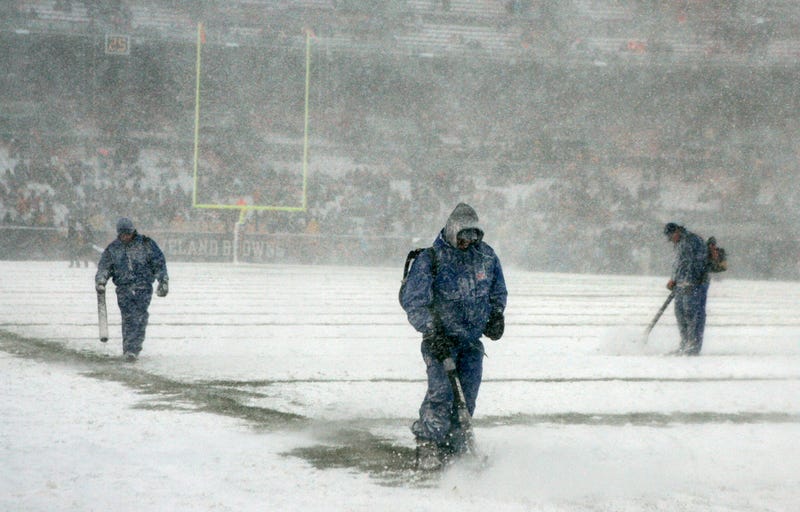 The Browns won 8-0 thanks to a pair of field goals by Phil Dawson – from 35 and a boomerang 49 yarder that skidded over the crossbar, taking a lump of snow with it, as well as a safety when an errant snap went over Bills punter Brian Moorman’s head.

“It is interesting because you go into each one of these games and weather is a factor,” Browns head coach Kevin Stefanski said. “Our stadium is on the lake. Buffalo, it is lake effect snow that we are talking about. It is one more element that you have to deal with. I know this, they played in a very windy game versus New England, and they threw it 30-plus times. It is hard, even with the conditions, to say that the game is going to go one specific way.”

A lot of fun awaits along with the challenge of churning out yards and points in such conditions.

“They have to deal with it, too,” Brissett said. “And it sounds like we’re going to get some snow here and the same type of environment we’ll play in, so we’ll get outside and get to practicing in that.”

Stand by – The chance that the Buffalo region, including where the Bills play in Orchard Park, could be shut down as a result of the storm making travel all but impossible has raised the prospect of the game potentially being moved.

“I am sure some people are having some conversations about that. I am not in that circle right now,” Stefanski said. “They will fill me in on a need to know. For us, we just have to focus on our preparation. If something changes, we will tell the players and we will tell you guys.”

In 2010, Stefanski was on the Vikings staff when a game at the Metrodome had to be moved to Detroit.

“That was when the dome collapsed, which was crazy,” Stefanski said. “I think for coaches and players, in any of those moments, you just deal with what is in front of you. Coaches and players, all we have to do is say, ‘Hey, go to this bus. Get on this plane. Go to this meeting.’ We don’t have to do all of the work that goes into it from the logistics standpoint. We are creatures of habit. We are creatures of listening to whoever tells us to go in whichever direction they want us to go in. You want to play the game on this day or that day? That is fine.

“Even going back when I was with the Vikings in [2010], we had a game versus the Eagles that was postponed until Tuesday night. It was supposed to be a Sunday night game. Like you dream about, playing Tuesday Night Football. I think for players and particularly the players, they are ready to adapt. That is what they do. Whatever comes our way, we will be ready.”

Turf wars – The NFLPA, led by president JC Tretter, has been active on social media to push for safer fields with the apparent increase in player injuries on artificial surfaces.

Ward explained Wednesday he can feel the difference between playing on grass and turf.

“Just what it does to your knees and your legs and how you feel coming off the field and I think it’s best to have a grass field and play on a grass field,” Ward said. “Looking forward to maybe getting that changed in the future. You definitely notice it whether [you’re] playing on grass or playing on turf though.”

Roster moves – The Browns signed defensive tackle Ben Stille off of Miami’s practice squad Wednesday. Stille was signed by the Dolphins as an undrafted free agent out of Nebraska. He has appeared in one career game, where he has two tackles.

The team also signed DT Roderick Perry II, who was waived earlier this week, to the practice squad.

Quote of the day – “Yeah, it is hard to practice. We have the cryochamber. I think those are day of the game things that you have to get really good reps in pregame warmup.” Stefanski on how rookie Cade York can prepare for a ‘snow bowl.’