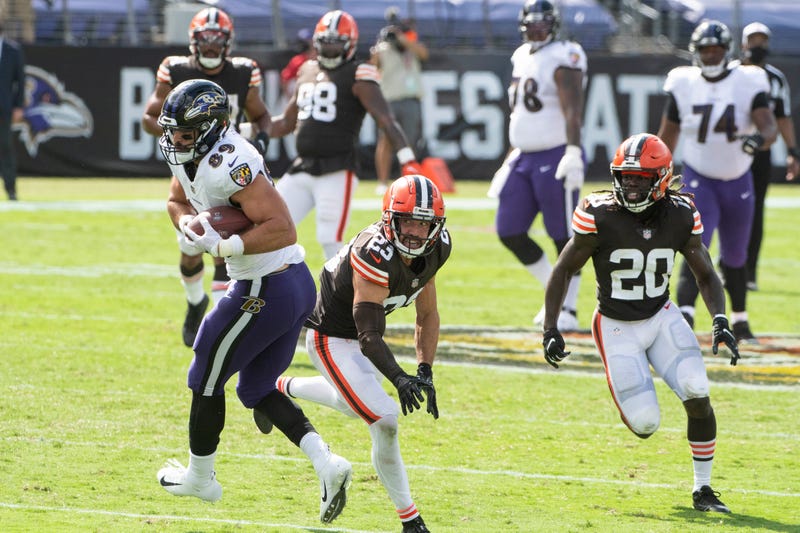 CLEVELAND, Ohio - (92.3 The Fan) - Sunday’s 38-6 loss to the Baltimore Ravens at M&T Bank Stadium was one the Browns would like to quickly forget.

According to head coach Kevin Stefanski, his team already has.

“They flushed it yesterday, to be honest with you," Stefanski said. "We are moving on while saying that we will still identify and correct those things that we have to get better at, but we are moving on."

The Browns became the latest victim left scratching their heads and searching for ways to stop the dual-threat quarterback Lamar Jackson.

Jackson and the Ravens rolled up 377 yards of offense, 275 of which came off of the arm of their reigning MVP to go along with three touchdowns.

The Ravens high-powered offense didn’t run into much resistance when it came to the Browns defense, particularly the back seven.

Cornerback Greedy Williams missed Sunday’s action while he deals with a shoulder injury. The Browns were already without fellow defensive back Kevin Johnson, who is recovering from a lacerated liver he suffered during training camp.

Linebacker Mack Wilson is dealing with a hyperextended left knee he injured in mid- august. His initial recovery timetable was 4-to-6 weeks. Tuesday marks five weeks since Wilson initially suffered the injury.

"We are missing those guys, but guys have to step up and we have to be able to do our jobs when guys go down,” Browns cornerback Denzel Ward said. “That is the National Football League. It is the next man up."

Meanwhile, free safety Grant Delpit, who the Browns drafted out of LSU who in the second round of the 2020 Draft, was already lost for the season after suffering a torn achilles tendon during training camp that required surgery.

One of those tapped to fill the void left by the barrage of injuries is newly acquired safety Ronnie Harrison. The Browns landed Harrison in a trade with Jacksonville on September 7th. Harrison will likely see a large role in the depleted secondary.

“I see him being a big contributor, especially as he continues to learn the defense and everything.” Ward said.  “You saw as soon as he came in, like one of his first days of practice, he got an interception on the one of the first or second days out at practice. He is just out there making plays. I definitely see him having more of a role as the games go along."

The Browns struggled to reign in Marquise Brown, who had five catches for 101 yards. But tight end Mark Andrews also caused problems against an exhausted secondary. Andrews caught two touchdowns Sunday and has historically been a pain for the Browns, catching a pair of scores in a 31-15 loss to the Ravens last December.

In Cincinnati, despite Tyler Eifert is no longer wearing orange and black, A.J. Green still poses a significant threat.

“He has been one of those high main guys in the league for a long time,” Ward said. “I am looking forward to getting in the playbook, watching film and seeing what he does and what makes him the player that he is.”

So where can things improve Thursday night?

The Browns will look to address their deficiencies on third down during the short week. Baltimore converted 6-of-11 third downs, keeping an already depleted unit on the field for more snaps. Thursday night’s opponent, Cincinnati went 6-for-14 on third downs.

“We did a great job getting to third down on some of the drives, but we just could not get off the field and tighten up on some of those passes or runs,” Browns’ linebacker Sione Takitaki said.

Winning the turnover battle will also make life easier. The Browns committed three, two fumbles and an interception, that the Ravens cashed in for points.

Stefanski also praised the performance of Nick Chubb and Kareem Hunt. The pair combined for 23 carries totaling 132 yards, good for 5.7 yards per rush.

Committing to Chubb and Hunt early, and more importantly sticking with that plan, could go a long way towards the Browns notching the first win of the Stefanski era.

“We let that game get away from us, and once it goes away it’s hard to go to the run,” Stefanski said. It’s hard to be encouraged by something when you lost like we did but I think there are things we can learn from and build on.”