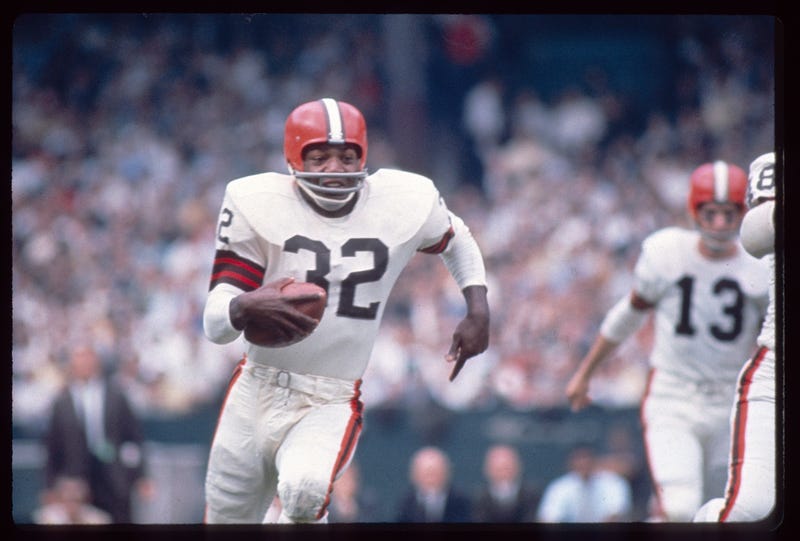 Cleveland Browns Hall of Fame running back Jim Brown runs with the football in this undated photo. Photo credit Focus on Sport/Getty Images​
By Daryl Ruiter

CLEVELAND, Ohio (92.3 The Fan) – As the Browns prepare to celebrate their 75th anniversary in 2021, the organization is putting plans together to mark the occasion in a big way.

Friday afternoon, during an interview with Andy Baskin and Jeff Phelps on 92.3 The Fan, Browns executive vice president/owner J.W. Johnson announced an addition to the team’s wardrobe.

“We will have an alternate uniform this year,” Johnson said. “So all the uniform heads out there that try to come up with them on social media can have a little fun now, if they're listening, to see what they can come up with.

“But we will have a nice alternate to be able to present to everybody at some point for the 75th anniversary.”

Johnson didn’t specify if the alternate uniform would be a throwback or another new combination.

“It’s like everybody asking me about orange pants and we had them the whole time,” Johnson said. “I guess you’ll just have to wait and see.”

Last year the Browns introduced a new set of uniforms that included the traditional white and brown jerseys with white, orange and brown pants and paid homage to the team’s roots with a clean, classic look to replace modernized threads worn from 2015-2019.

The Browns are coming off their most successful season since 1994 with an 11-5 finish and by advancing to the divisional round of the AFC playoffs.

“We’re really excited,” Johnson said. “75 years, unbelievable. A lot of great history and tradition that this team has had. Obviously, lots of highs like any team and unfortunately some serious lows with the biggest one, in my mind, was the team leaving but kind of never left. I was always the Browns and thank goodness were able to come back as the Browns when they were able to get back in the NFL.

“We’re just so thrilled to be a part of this. What an opportunity. There’s only 32 of these teams in the league and for us to be able to be the stewards of this organization for the city of Cleveland and for the fans all over the world and to celebrate 75 years with so many great players and the history is really exciting.”