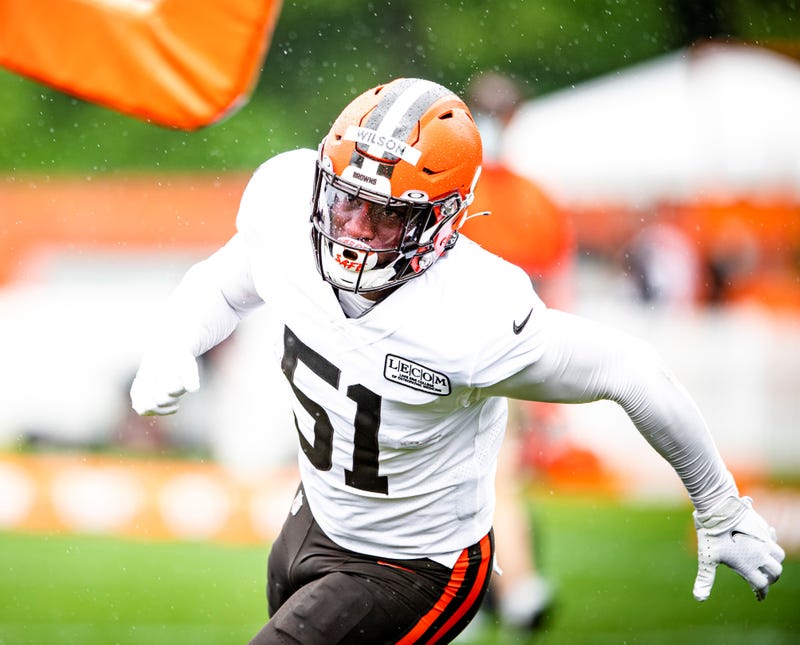 BEREA, Ohio (92.3 The Fan) – Browns linebacker Mack Wilson was carted off the field after suffering an apparent knee injury during Tuesday’s practice.

Wilson suffered the injury during a 7-on-7 period in which he broke up a pass and appeared to hyperextend his left knee as he came down.

Wilson had his head in his hands as he was carted to the field house, but it is unclear how severe the injury is. The team said Wilson will have it further evaluated.

On Monday, Wilson hit Nick Chubb high after the running back caught a short pass from quarterback Baker Mayfield resulting in Chubb suffering a concussion.

Prior to practice Tuesday afternoon head coach Kevin Stefanski indicated that he was not pleased with Wilson’s tackle of Chubb.

“We have to be smart,” Stefanski said. “We have a lot of work to do, and we are going to continue to have our pads on. We just have to make sure as a team that we get our work done and get it done while taking care of each other.”

Chubb did not practice Tuesday and Wilson practiced with the second-team defense. Tae Davis replaced Wilson with the first-team defense.

Pick party – The top three quarterbacks on the depth chart – Mayfield, Case Keenum and Garrett Gilbert – were picked off during 11-on-11 team periods Tuesday.

Denzel Ward started it off by getting his hands on a deep ball intended for Odell Beckham Jr. after Mayfield scrambled to avoid trouble – a virtual sack could have been called and Mayfield came awfully close to crossing the line of scrimmage before heaving a prayer deep.

Linebacker Jacob Phillips picked backup quarterback Case Keenum off on the near sideline causing the entire defense to erupt on the sideline.

Cornerback M.J. Stewart Jr. completed the trifecta by jumping in front of a Garrett Gilbert throw that bounced off a receiver's hands up the far sideline.

Growing pains – Not much is going right for the first team offense early in camp other than a couple of nice completions to Beckham, Jarvis Landry or tight end Austin Hooper the first two days in pads.

The defense has dominated up front with a strong pass rush and stout front against the run.

Right before Mayfield’s interception in 11-on-11, rookie left tackle Jedrick Wills false started. Later in practice the offense ran out of time and was called for a delay of game on a third down situation.

Cornerback Kevin Johnson recorded a virtual sack of Mayfield on another play and at least two more virtual sacks potentially could have been called but the plays continued because Mayfield moved sufficiently to avoid pressure.

Before we rush to any snap judgements, it is still early in camp, and Mayfield is still getting his bearings in Stefanski’s system – the third one he’s had to learn in as many years since being drafted – so there are going to be growing pains. The hope is they’re just getting them out of the way now.

Kickin’ it – Kicker Austin Seibert had a good day, making 11 of his 12 kick attempts.

His only miss was a second kick from 47.

D-line shakeup – Defensive end Porter Gustin replaced Chad Thomas, who had taken the spot of Myles Garrett – out with a hamstring injury – the first three practices.

Puppy pound counter – A total of 30 puppies have been adopted from the northeast Ohio SPCA and 525 adoptions have been made since the program launched in 2015.