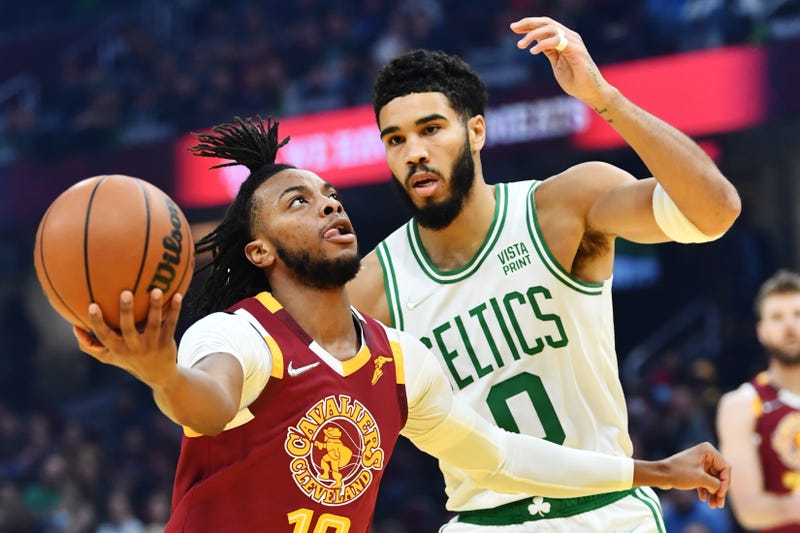 Missed shots and turnovers plagued the Cavaliers for most of the first 36 minutes, as the Wine and Gold looked every bit the team that was playing its’ third game in four nights.

The intangible characteristics often used to characterize this group; consistent, competitive, gritty, hard-working and a strong desire to win took over.

The result? A-91-89 come-from-behind win over the Celtics at Rocket Mortgage Fieldhouse.

"There's no basketball reason we should have won that game, but there was a collective spirit that refused to allow us to lose that game,” said head coach J.B. Bickerstaff. “Don't get me wrong, guys made some critical plays and carried their weight. But it's the spirit of that basketball team that has that fight in them, that won't give up.”

That collective spirit helped author the 19-point comeback win that was anything but certain until the final buzzer sounded Saturday night.

“We were physical with them. We played through adversity. There were some calls that didn't go our way,” Bickerstaff said. “Instead of giving in and allowing the officials to dictate the game, our guys continued to compete and continue to scrap and gave themselves a chance to win in the end.”

The Cavs looked out of sorts from the jump. They shot just 15 percent from the field in the first quarter. They led 9-6 with 7:16 remaining in the frame and didn’t score a basket the rest of the quarter.

It was easily the worst 12 minutes of the year.

“They (Boston) scored 20 points and the offense let us down then,” Bickerstaff said.

That offense consisted primarily of Darius Garland in the early going.
Garland was 6-of-11 in the first half. Everyone not named Garland was 6-of-28 as the Cavaliers trailed by 52-38 at the half.

“If my teammates need me to do that, that’s what I'm going to do,” Garland said. “I knew we're coming off a back-to-back and it was going to be tough. We were all kind of tired and our kegs weren’t under us. So as a leader, I just had to step up and try to make plays for everybody.”

Ironically, fixing the Cavaliers problems on offense started on the defensive side of the floor. The Cavs locked things down in the fourth quarter, at one point holding the Celtics scoreless for 10 straight possessions. It was a stretch that spanned nearly seven minutes.

“We all just bought in, and we knew we had to get stops down the stretch. That was our goal,” Garland said. “Coming into every huddle, it was just getting stops. We weren’t worried about offense. If we can get stops it just turns to great offense for us.”

Garland’s heroics kept the Cavaliers heads above water until the rest of the cast could shake off the rust. Eighteen of Garland’s team-high 22 points came in the first quarter. Evan Mobley, Ricky Rubio and Cedi Osman all began to find their form. When it all started to click, the Wine and Gold opened the fourth quarter on a tear.

Rubio played 21:32 of the final 24 minutes Saturday night and made them count. The 10-year NBA veteran scored 14 of his 16 points during that span. He checked into the game at 9:32 of the third quarter and never checked back out.

“It was a simple conversation,” Bickerstaff said. “We were off tomorrow, and he nodded his head and went to work.”

Spurred by a 21-2 run that wrapped up the third quarter and opened the fourth, the Cavs found themselves with their first lead since early in the first quarter at 77-76.

As usual, Mobley wasn’t solely impactful on the offensive end of the floor. A chase-down block of Jayson Tatum was initially ruled goaltending with 5:26 to play. But after a challenge by Bickerstaff, the call was overturned to keep the score knotted at 79.

“I made the move down and got it blocked (on offense), so I just tried to hustle back and make another play big play at the other end,” Mobley said. “I knew Jason was probably going to go all the way to the rim, so I just falling down and jumped and tried to block and got the block.”

Like the rest of the 19,432 in attendance, Bickerstaff knew that Mobley got it clean, so he wanted the officials to get a second look at it.

“However many people were here tonight, everybody knew it was a clean block. It was a magnificent play. It was a winning play,” Bickerstaff said. “He's got a lot more games left to play and he's going to continue to get better. And that's the scary part about it.”

No moment has been too big for the seven-footer out of USC this season. Mobley solidified that with a pair of free-throws to go along with a baseline jumper down the stretch. It opened the door for Garland to put the finishing touches on the Cavaliers ninth win of the season.

His 21st and 22nd points of the night coming on a pair of free throws of his own with 9.4 seconds remaining.

"It's just showing that dog mentality that we have. Showing our grit and our toughness,” Garland said. “That’s what we go by and that’s what we stand about.”

These K-9s better rest up, because they could be in for another dogfight on Monday when they run it back against these same Celtics.