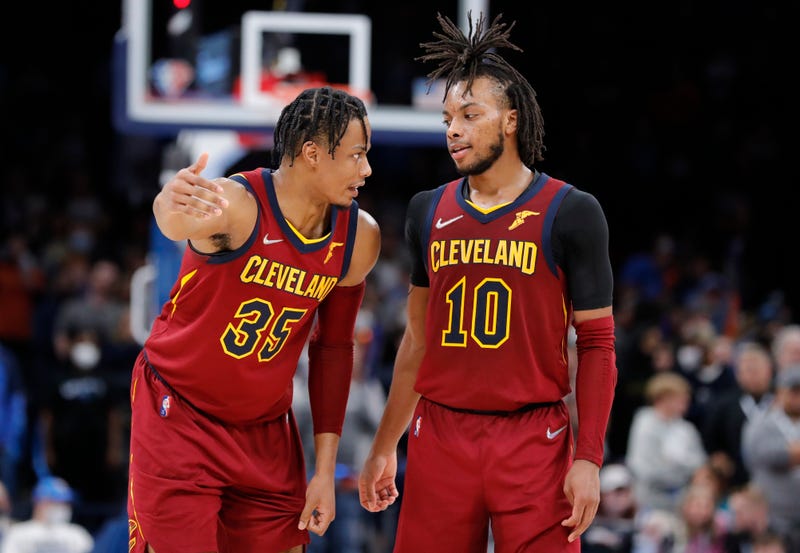 CLEVELAND, Ohio (92.3 The Fan) – Entering training camp ahead of the Cavaliers 2021-22 campaign, head coach J.B. Bickerstaff sensed something about his group.

“It was different from training camp, and you could feel the difference,” Bickerstaff said. “That third year, is a big year for guys.”

It’s been a big year, with big wins. Perhaps none more impressive than the Cavs fifth-straight, a 114-107 win over the Brooklyn Nets on Monday afternoon at Rocket Mortgage Fieldhouse.

“It's a signature win for us against a high-level team,” Bickerstaff said. “With the reasons why and excuses, you know, coming back off that long road trip and all those things, you know, playing against two of the most elite players in our league and then our guys figuring out a way.”

Monday’s game marked the proverbial litmus test—a measuring stick against one of the top teams in the Eastern Conference. The Cavaliers passed with flying colors. Their growth has been exponential this year and it was evident to both Bickerstaff and his players from the get-go.

“It was a big win for us. Every win that we get this this year is a big win,” said Isaac Okoro. “We just want to keep proving to the league that, you know, we’re one of the best teams in the league right now.”

They stood toe-to-toe with the Nets, regardless of the fact they were without Kevin Durant. Kyrie Irving and James Harden combined for 19 points, and Okoro was matched up against Irving for much of the night.

“As difficult as it is guarding him, I just try to keep him in front of me,” Okoro said. “Knowing that I have J-A, Evan, Lauri in the back to protect me, it's easy for me to come up there and crowd him.”

Okoro finished with 15 points. His press-conference companion Darius Garland led all Cavaliers in scoring with 22 points, 12 assists and six rebounds.

It was announced after the first quarter that Garland had won the Eastern Conference’s Player of the Week during the game, at which point he had already dropped 12 points and four dimes.

“He’s just an all-around player. I mean, he literally controls the game for us,” Okoro said. “If it's rebounding, you can see now he's starting to get some rebounds now. Playmaking, scoring. I mean, he does everything for us.”

It was a slugfest from the opening tip. The Cavs showed some wear-and-tear from their recent long road trip. They scrapped their way to a one-point deficit at the end of the first quarter before outscoring the Nets 35-28 in the second quarter.

In the third quarter, Irving began to heat up. Looking comfortable in the building he once called home, Kyrie canned 6-of-8 shots on the way to scoring 14 points to give the Nets an 88-87 lead going into the fourth quarter.

But like so many times this season, in a year that’s contained a laundry list of defining moments the Cavaliers buttoned up on offense and locked down on defense. After committing 15 turnovers in the game’s first three quarters. The Cavs turned the ball over just once in the final 12 minutes.

here was no let down Monday, as Garland canned 4-of-6 shots over the final 12 minutes to help close the Nets out. The Cavs made their hay in the paint, outscoring Brooklyn 20-10 from close range.

“Super hot,” Garland said of his confidence level in fourth quarters. My teammates, coaches that just let me be me. Let me have the ball in my hands in just make plays.”

The Cavs shut down on of the NBA’s most potent offenses in the fourth quarter. Even despite Durant’s absence, the Nets can put up crooked numbers in a hurry. But the Cavs held Brooklyn to just 19 points in the fourth quarter, limiting the Nets shooters to just 6-for-20 from the field. The Nets didn’t make a three-pointer in that final stanza and were held scoreless for more than three and a half minutes.

“That lets you know what you're capable of defensively. And there were individual plays. There were one-on-one plays,” Bickerstaff said. “Whether it was Lauri (Markkanen), Isaac (Okoro) and there's weak side help plays like all the things that we talk about defensively. You know, they were there in that fourth quarter.”

Garland was one of only two players to average at least 20.0 points, 6.0 rebounds and 12.0 assists during the Cavs perfect 4-0 week that saw them rack up wins against Sacramento, Utah, San Antonio and Oklahoma City.

Garland wins award for first time of career and is second Cavalier to earn the honor this season, joining Jarrett Allen who earned the honor in the season’s third week.