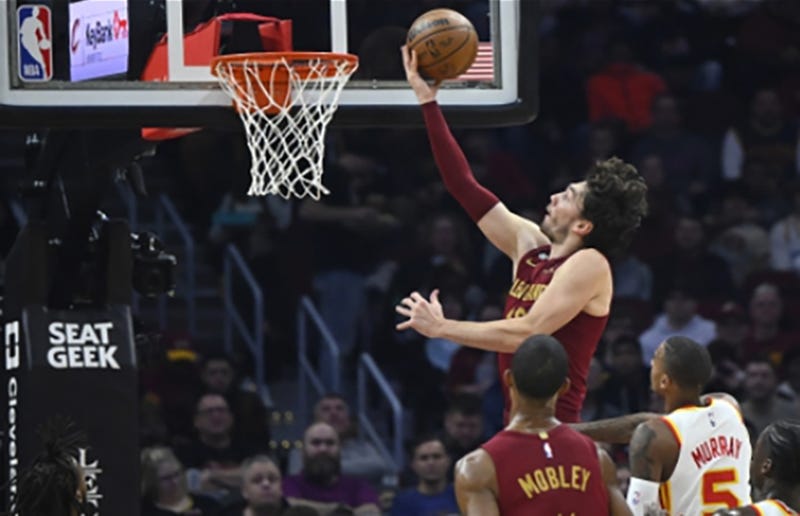 The Cavs got out of their funk Friday night and had won 2 straight before Monday’s match-up with Atlanta Hawks, who stood percentage points in front of them in the early Eastern Conference standings with matching 10-6 records. It was set up to be an offensive showdown between two of the best backcourts in the NBA with Donovan Mitchell and Darius Garland dueling with Trae Young and Dejounte Murray. However, the Cavs put on a defensive clinic and Cedi Osman added his own offensive prowess to fuel a win over the team that ended their season last year.

Mitchell and Garland still combined for 55 points in the 114-102 win but their Atlanta counterparts only tallied 36 while struggling to a 14-39 combined shooting night.

Coach JB Bickerstaff was very pleased with his squad’s ability to lock down and close out their 3rd straight W at Rocket Mortgage Fieldhouse.

“That 2nd half I thought we did a great job, we showed what we're capable of defensively,” said Bickerstaff. “We know when we're at our best we can create stops, force turnovers, and create easy opportunities for ourselves because of that. That's how you win basketball games against good teams.”

Garland finished with 26 but also coughed up 8 turnovers. The give-a-ways however came to a halt once the game mattered.

Mitchell also was one of the many ratcheting up on defense to close out the game and knows that basketball is a game of adjustments.

“We started the year off, it felt easy, it felt smooth but that's not going to be all 82 games, there's going to be moments where things start to go differently and then how do you respond,” says Mitchell. “I think the past 3 nights we've shown grit and determination in getting back to ourselves.”

But who are the Cavaliers? If you ask Coach Bickerstaff, he’d say they’re a physical team who punishes you on defense and wants to make sure the rest of the league knows it.

“As the season goes on, we all adjust. Early in the game we were getting some fouls because we were playing physical,” said Bickerstaff. “What you can't do is be a hit or miss team because then once you are physical, you'll look out of sorts, and it doesn't look like who you are. If you maintain that physicality, the league becomes accustomed to who you are, and your reputation allows you to continue to be who you are.”

The 6th year pro has been in and out of more dog houses than Snoopy but has finally seemed to settle into a role as the jolt off the bench the Cavaliers need to avoid lulls in the action. Monday, he was more than that as he connected on 8-10 from the floor, 3 of 4 from behind the arc and 23 points total, his second straight 20-point outing. Osman now has the confidence of the coach, his teammates, and the fans in Cleveland.

“That's the energy that we were looking for from Cedi. He has a spirit that our guys feel and, in this building, when he gets rolling, the crowd goes to another level,” said Bickerstaff. “We've seen Cedi play his role to the best of his abilities these past couple games.”

“Confidence is just growing, he's getting that time and taking it to his advantage, making the most out of his minutes,” said Garland. “He's super-efficient on the floor, he's competing on both ends of the floor, something we need as a spark plug.”

“I don't even run back, you just throw it out there and you know he's going to go out and finish,” said Mitchell. “He's also playing phenomenal on both ends of the floor, doing a lot especially going from DNP to playing a few minutes to not playing to playing. To be going out to give us a spark, it's phenomenal.”

The Wine and Gold will see if that defense and that spark off the bench will propel them to a 4th straight win when they host the Portland Trailblazers Wednesday night at 7 from Rocket Mortgage Fieldhouse.