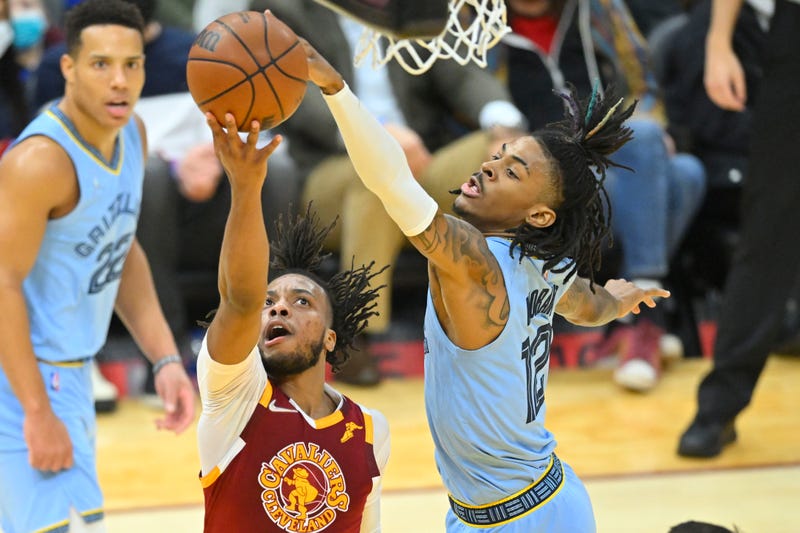 CLEVELAND, Ohio (92.3 The Fan) – It’s been exactly one week since Cavaliers’ point guard Darius Garland was placed in the NBA’s health and safety protocols.

In the seven days since, the Wine and Gold’s back court has been turned on its ear. Reinforcements are on the way in the form of Rajon Rondo.

But Tuesday night at Rocket Mortgage Fieldhouse, Garland pulled on his familiar No. 10 jersey, assumed his role as the starting point guard and quickly picked up his All-Star caliber season right where it left off.

WE MISSED YOU, #DariusGarland ❤️💛

RT if you did too. #NBAAllStar pic.twitter.com/KZHENA7Xqs

“I'm a little bit tired. My legs are tired, but it's good to be back out there with the guys just playing a game,” Garland said.

The point guard was brilliant, posting 27 points and ten assists while turning the ball over just once.

Jarrett Allen, Evan Mobley, Kevin Love were great, too. But the Grizzlies arrived in town as one of the NBA’s hottest teams, with a record of 15-4 in their last 19 games. They slugged it out with the Cavs and capitalized on a key turnover in the final minute to escape with a 110-106 win.

“We made a couple of mistakes defensively and offensively at the worst time. It's nothing really more than that,” Allen said. “We should have been in the right coverage that coach had us in. We all saw the pass at the end. That's just good defense by Ja Morant.”

Garland may have missed the last four games, but he wasted little time making an impact against the Grizzlies. He knocked down his first shot, a 3-pointer, just 42 seconds into the game and followed it up with a slick assist to Jarrett Allen a minute later.

“There's so much more we can do with the ball in his hands.
And, you know, I think again, he's going to work himself back into it,” said Cavaliers head coach J.B. Bickerstaff.

Bickerstaff said he would monitor the length of his starting point guard’s stints. He played 7:46 in that first quarter was summoned to the bench to take a breather for the final four minutes.

“I needed it. J.B. was reading my body language, so I needed it for sure,” he said. “He knows what to do, so I'm just following what he does.
If he snatches me out, I’ll just go sit for a little bit and hopefully he puts me back in the game.

Garland showed little signs of any adverse effects from the layoff. He stripped Brandon Clarke from the seat of his pants and firing a pass from the floor to Mobley for a dunk and picked up a buzzer-beating layup all in the second quarter.

The Cavs, with Garland reinserted into the lineup, were crisp for the first 20 minutes. Cleveland led 55-44 with 3:57 to play but the Grizzlies went on a 13-0 run to take a two-point lead into the half.

“Some of our shots, I thought, were good shots that just didn't go,” Bickerstaff said. “Our floor balance wasn't great. So, when you miss those shots, they get those long rebounds (and) now they get out and get going and get easy opportunities, They’re really good transition basketball team.”

The two teams continued to slug it out in the second half, with ten lead changes and ten ties over the final 24 minutes.

But as Garland cooled off, so did the rest of the Cavs. The Wine and Gold shot 38-percent from the field over the final two quarters, and just 26-percent from three.

Allen had 22 points and 12 rebounds, just four of them coming in the fourth quarter. Love tallied 18 points and ten rebounds off the bench. His 12 points in the first half helped stake the Cavs to an early lead.

“I think we're going to be in a lot of games like this. So, we have to start working on the in-game situation and seeing everyone locked in on the play that coach has been drawn up or that he's running for us,” Garland said.

Garland, who showed up to his post-game media conference with ice packs on his knees, admitted his legs weren’t there at the end. Despite scoring 14 points in the first half and 13 more in the second, Garland shot just 28-percent (4-for-14) and canned just one three-pointer in the second half.

“Coming down the stretch, my legs were starting to get a little bit tired, just being off. Everything started going short,” Garland said. “I wasn't really fatigued until the fourth. COVID started getting to me a little bit, I guess. But other than that, I was fine. Just have to get back in good shape.”

After Mobley tied the game at 104 apiece with a basket from the paint, the Grizzlies Ja Morant scored the final six points for Memphis to close it out.

“I that's what is going to come down to. That's what we understand is that the fourth quarters are what's important,” Bickerstaff said. “In a lot of our wins, we've been fortunate to have large leads. But now understanding how important all the small things are and how important the details are down the stretch. Every shot, every pass, every possession, you know, every box out, every rotation is meaningful.”