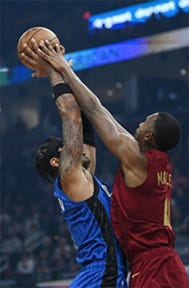 The Cavaliers took on a tall task Friday night against the Magic as Orlando’s starting line-up featured 4 players 6’10 or taller while Cleveland was without their All-Star center Jarrett Allen once again nursing a back injury.

Donovan Mitchell got the scoring started early with 16 points first quarter points. but the rest of the squad struggled to combine for only 11 points as the Cavs took a 27-25 lead.

Against the tall-ball Magic lineup Evan Mobley struggled with aggressiveness as he was held scoreless while only attempting 1 shot in the first half before slamming home a put back with 5 ½ minutes to go in the 2nd. Another put-back slam and a coast-to-coast slam to beat the buzzer at the half gave Mobley 6 quick points to wrap up the first stanza. The former 1st round pick has been working on pushing the ball up the court instead of deferring to the guard.

“Just me watching film, me grabbing rebounds and seeing opportunities of when I can push it and when I can't and becoming more decisive,” said Evan Mobley. “They were preaching to me grab the rebound and push it if you see opportunities and recently, they've been learning to run and play with me."

Mitchell is glad to have his big man running the point occasionally because he knows what Mobley can do with the ball in his hands.

"He's being way more decisive, this is the Evan that I know,” said Mitchell. “Coming out, getting to his spots, finishing. Even on rebounds, early in the season he would kind of look at me or DG 'should I take it or should I pass it?' he's just taking it up the floor. You saw at the end of the half, making a move, getting a Euro-step, and getting a dunk. When you got a guy doing that, defense don't know whether to take myself or Darius away or play that.”

Meantime the Magic looked like a team trying to give the game to the Cavs with 11 first half turnovers but the shots were not falling for the Wine and Gold as they were only able to take a 54-47 lead into halftime.

Mitchell, however, continued his hot start in the 3rd as tallied another 13 points in the quarter to push his game total to 34.

The 4th began with an 18-point Cavaliers lead but Orlando kept attacking to close it to an 11-point game with about 8 minutes left in the game. Mobley however continued his attack and helped stop the bleeding as the Magic got the Cavs lead down to 8 with 3 ½ minutes before he connected on a trey to extend it back to 11. It was a big shot for the big man to take and coach JB Bickerstaff knows it’ll be one of many big shots in Mobley’s career.

"Evan is continuing to show his value on both ends of the floor. He can dominate the painted area. In the moment where the game was shifting, he had the courage to take the three and make the three,” said Bickerstaff. “He is special, he is unique, he has the ability and the potential to be great and I think he's working and continuing to show us."

Donovan Mitchell knows the confidence in the young big man and connecting on that late 3 shows it.

“You see what he's doing offensively and you see the confidence to take the 3 ball late, that's growth within 23 game,” said Mitchell. “He's working non-stop trying to get better."

It wasn’t a pretty win by any means by it was 107-96 Wine and Gold when the clock hit 0:00 thanks in large part to Evan Mobley’s 19 points, 13 boards, 4 assists, 2 blocks, and a steal for good measure. The big man however was still humble after helping improve the Cavaliers’ home record to 10-1.

“"Shots were just falling for tonight me, staying on the glass, staying active on both ends of the floor and the night just went my way."

The Cavaliers look to improve their road record Sunday at Madison Square Garden against the Knicks.