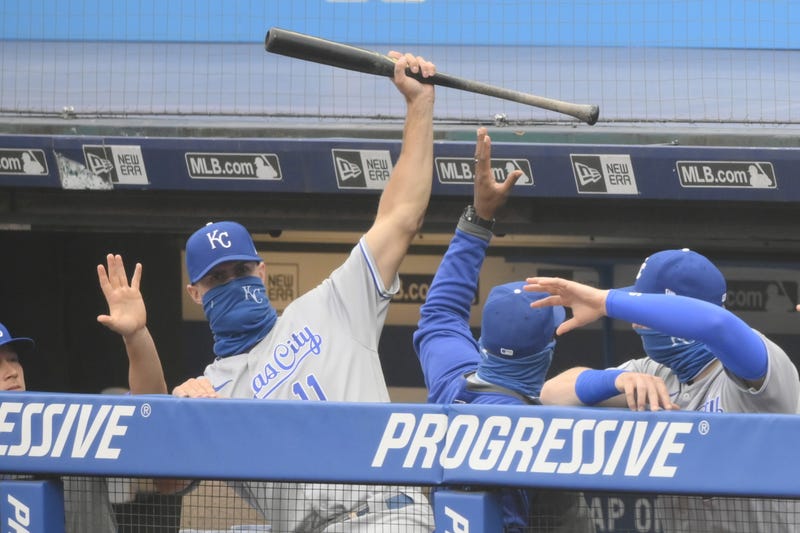 Kansas City Royals center fielder Bubba Starling (11) catches the bat of shortstop Adalberto Mondesi (27) who lost control of it on a swing in the first inning against the Cleveland Indians at Progressive Field. Photo credit David Richard-USA TODAY Sports
By Tim Grattan

CLEVELAND (92.3 The Fan) – Offense was a no show for the Indians on Wednesday night.

In Cleveland’s 3-0 loss to the Kansas City Royals, the team left 10 runners on base and had six hits.

“We’re not hitting with guys on base this year,” Indians interim manager Sandy Alomar said. “You can see that in the score today. We left 10 guys on base; I think we’re trying too hard to put the ball in play. The Royals did a great job with runners in scoring position, and sometimes we get too big with men in scoring position.”

Kansas City broke the scoreless game in the sixth inning.
Cam Gallagher and Whit Merrifield each had back-to-back base hits off Carlos Carrasco. Adalberto Mondesi drove in the first run of the game with an RBI single to score Gallagher to make it 1-0 Royals.

Carrasco looked like an ace for Cleveland on the mound.
Carrasco (2-4) pitched seven innings, gave up an earned run and struck out seven.

“He looked pretty good,” Alomar said. He had more command of the fastball, better command when he’s behind the count. He’s not picking (of his pitches) anymore and is more attacking guys.”

The Royals added two more runs in the ninth off Indians pitcher Phil Maton. The right-hander gave up an RBI triple to Edward Olivares and an RBI single to Nicky Lopez – making it 3-0 Kansas City.

The Indians had their best opportunity to score in the fifth. Roberto Perez, Delino DeShields Jr. and Jose Ramirez all reached base.
Carlos Santana came up to the plate with two outs. Santana looked at strike three to end Cleveland’s offensive threat.

“I think they were trying hit the ball in the air but they were getting too underneath,” Alomar said. “When you get too much underneath the baseball, you’re not going to drive it.”

NOTED: Before Wednesday's game against the Royals, the Indians opted right-hander Adam Cimber to the team's alternate site in Lake County. In 13 games this season, Cimber is 0-1 with a 4.22 ERA and only five strikeouts.

Cleveland called-up lefty Kyle Nelson to fill Cimber's spot in the bullpen. Nelson was a 15th-round pick in the 2017 MLB Draft out of UC Santa Barbara, where he played with Shane Bieber in college. Nelson has a combined 2.28 ERA with seven saves in the Indians' minor league system (Columbus, Akron and Lynchburg, Va.) in 2019. He was named MiLB.com Organizational All-Star in 2018.

The Indians placed right-hander Jefry Rodriguez on the 45-day Injured List with a right shoulder strain.