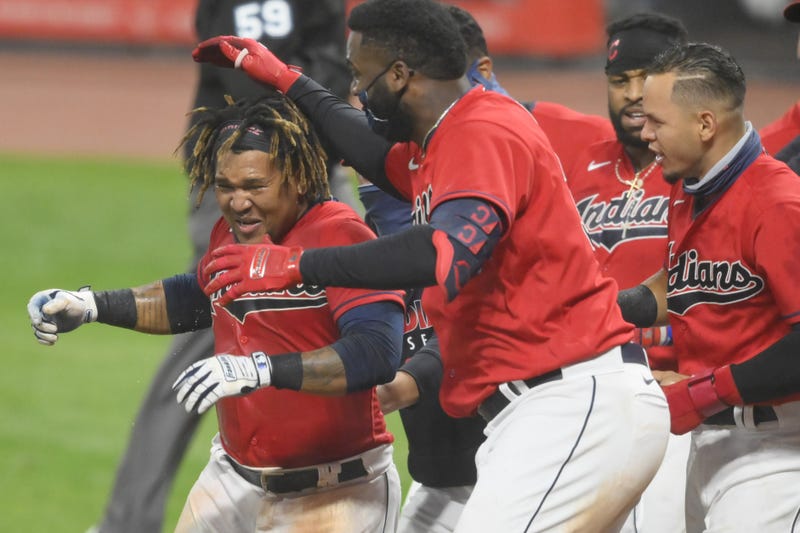 CLEVELAND (92.3 The Fan) – Jose Ramirez is playing like an American League Most Valuable Player candidate for the Cleveland Indians.

On Tuesday, Ramirez stepped up and hit the game-winning three-run home run to lead the Indians to a 5-3 extra-inning win over the Chicago White Sox, clinching a spot in the 2020 MLB playoffs.

Ramirez had a great feeling when he rounded the bases in happiness, knowing his team is heading back to the postseason.

“It feels good,” Ramirez said. “Knowing as a team we played well tonight, it felt like a team effort.”

Cleveland will make its first postseason since the 2018 season, and fourth in the past five seasons.
The Indians also clinched their eight-straight season with a winning record. A feat that hasn’t happened for the ballclub from 1994 to 2001.

With Terry Francona being out with health-related issues, Sandy Alomar is happy to be the fill-in manager for a playoff team.

“It’s an honor to have the opportunity to do this,” Alomar said. “I wasn’t expected to do this year. I was doing my job and this happened. It’s a big reasonability because you’re replacing a hall-of-fame manager. I’m glad I have people who I can lean on and they can lean on me. This goes to the players for helping me and kudos to the organization for helping me.”

Cleveland (31-24) was down to its final out going into the walk-off win in the bottom of the 10th inning.
With the rules in extra innings, Roberto Perez started on second base after being the third out of the ninth. Josh Naylor and Delino DeShields Jr. both got out, and Francisco Lindor went to plate. Lindor hit an RBI double to drive in Perez to cut the White Sox lead, 3-2. Cesar Hernandez drew a walk, and Ramirez crushed his three-run home run to right to seal the Indians win and spot into the playoffs.

“It’s unbelievable,” Alomar said. “The way the bullpen pitched today was incredible. Having the top of the order to come up in that inning – Frankie and Jose delivered big time.”

Cleveland opened the scoring in the first when Hernandez hit a solo home run to right field as the Indians drew first blood against Chicago, taking a 1-0 lead.

The Indians had a chance to extend their lead in the fifth. Perez reached base with a fielding error, then moved to second base on a base hit by DeShields. However, Francisco Lindor and Hernandez both flew out to center to end Cleveland’s threat to score with one out.