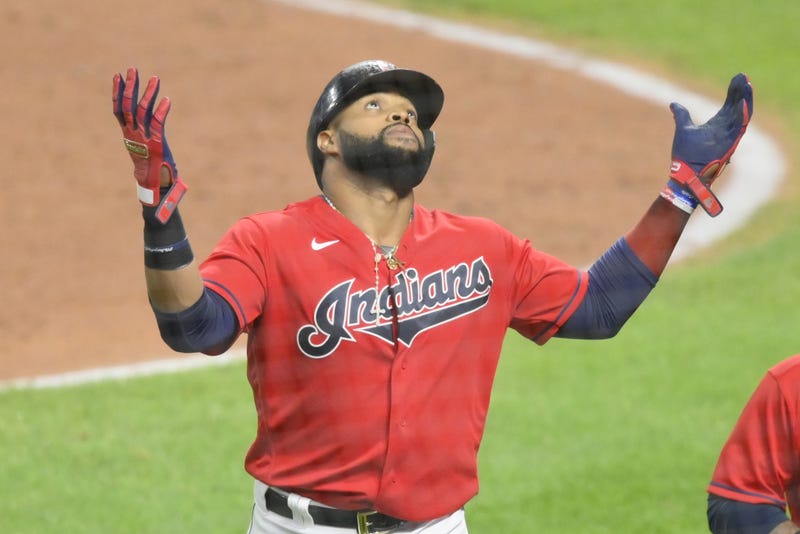 CLEVELAND (92.3 The Fan) – Carlos Santana stepped up for the Cleveland Indians when his team needed him the most Monday night.

The All-Star first baseman hit a two-run home run in the fifth inning, leading the Indians to a 7-4 win the A.L. Central-leading Chicago White Sox.

“I was looking for my pitch, trying to make contact,” Santana said. “There were no outs; trying to extend the base(ball). I don’t think home run, I don’t think of nothing. With my approach, I try to extend middle and try to get contact.”

Indians interim manager Sandy Alomar was thrilled for Santana to hit a big home run for the Indians (30-24).

“That was huge,” Alomar said. “He’s been struggling a lot left-handed. He got that bat right-handed and that was huge to see him hit a home run and take the lead. You’re never out of the woods against the Chicago White Sox. They are very dangerous and anybody in their lineup can take you deep.”

With the win, Cleveland’s magic number to clinch a spot in the postseason is down to one. The Indians need a Seattle Mariners loss to the Houston Astros to get a playoff invitation.

If that happens on Monday night, the team will celebrate the postseason clinch Tuesday.

“It’s very difficult to stick around indoors with the protocols,” Alomar said. “We’ll just come back tomorrow, and if we have to celebrate tomorrow, we’ll do it.”

Franmil Reyes gave the Indians an insurance run in the seventh with a sacrifice fly to center to score Cesar Hernandez – making it 7-4 Cleveland.

Chicago (34-20) broke through on the scoreboard in the fifth. Tim Anderson and Yasmani Grandal had base hits and Jose Abreu cleared them with a two-run single off Indians starting pitcher Aaron Civale. In the next at-bat, Eloy Jimenez hit a two-run homer as the White Sox tied the game 4-4.

“His command was not good tonight,” Alomar said. “With the heart he has, he navigated through six innings with a high pitch count. He did a good job for our team by keeping us in the game – even though he gave up four (runs).  We finally got him a couple of runs and he was able to get that win.”

Cleveland fired its shot on offense in the first. Francisco Lindor and Hernandez led off the inning with back-to-back singles. Then third baseman Jose Ramirez hit a three-run home run to right to give the Indians a 3-0.

The Indians added another run in the second on Hernandez RBI single, scoring Josh Naylor to extend the lead 4-0.

Cal Quantrill will take the mound for the Indians in game two of their four-game series against the White Sox. Starter Shane Bieber will get pushed a day back to start Wednesday night, so the Indians ace can make the Game 1 start of the postseason.

Manager Terry Francona will not manage the Indians’ four-game series against the Chicago White Sox that started Monday night.

Francona, 61, is recovering from surgery from a blood-clot issue and hasn’t managed the Indians since Aug. 16. Francona undergo surgery for the blood-clot issue on Aug. 21 at Cleveland Clinic. It’s unclear if Francona will return to the dugout manage Cleveland’s final series of the regular season versus Pittsburgh or the postseason. Francona has been dealing a gastrointestinal problem for almost a year.

First base coach Sandy Alomar is 22-18 while filling in for Francona.

news
Woman raises pet duck from egg she bought at the grocery store
music
Remembering that one time Matt Stell’s mom wore a gorilla suit to prank her son
news
Broadway shows to open Sept. 14; tickets go on sale Thursday
news
Woman sets home on fire, then sat in lawn chair to watch
news
Survey shows how the pandemic may have hit younger adults harder than their parents
music
The Reel Buzz: First photos of ‘Game of Thrones’ prequel series ‘House of the Dragon’