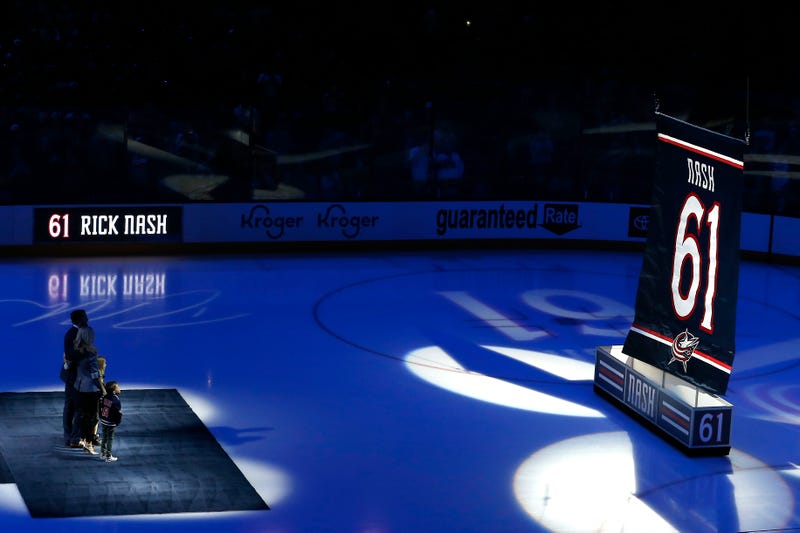 COLUMBUS, Ohio (92.3 The Fan) – They carried signs with his number and wore jerseys bearing his name.

Fans shared stories, took pictures and celebrated the face of hockey in Columbus.

In a city dominated by collegiate sports with a history decorated as The Ohio State University, Rick Nash is The Columbus Blue Jacket.

Matt and his father, Craig, made the four-plus hour drive from London, Ontario to see Nash’s No. 61 hoisted into the rafters at Nationwide Arena on Saturday night. For the father and son, their memories of Nash started back at the old London Ice House.

What a moment for Rick Nash and his family. ✨

The first number to be raised to the rafters for the @BlueJacketsNHL! pic.twitter.com/a0KMLIeFEZ

“It was a different style of game back then. It was a lot of hitting and grinding,” said Craig. “Rick, you could see back then totally stood out with, you know, the big body frame, the long reach, the long stick. He just dominated.”

The matchup with the Bruins marked the first time they have been able to make the trip across the border since the COVID-19 pandemic put the world on hold.

“We made the trip down here every March break and we went and saw him play in Detroit,” Craig said. “It's been a couple of years since we've even been able to come down here. For it (the border) to have opened up to be able to attend not only a game, but a game to honor him and one that's pretty special for him and the town, the city of Columbus. It's amazing.”

But the Bowden’s aren’t unique in their Blue Jacket fandom being laced up with Rick Nash. When the lanky 18-year-old pulled a Blue Jacket sweater over his head on draft day in June of 2002, there was just one sheet of ice in Columbus.

“He inspired me to watch more hockey. Hockey was new to Columbus at that time. It’s just kind of how I found the game,” said Andy Farver from Medina. “I’ve got one that’s playing and one that’s learning how to skate. If you think about growing the game not only here in Columbus, but Ohio. He was the guy.”

Farver stopped to take some time and reminisce during the first intermission while his boys put the finishing touches on a pair of signs to commemorate the evening.

They were works of art, much like Nash’s 289 goals he scored in Union Blue; none more spectacular than one he scored in January of 2008 where he danced through two Coyotes defenders before faking Mikael Tellqvist to the ice and firing into the open left side of the net.

On this day in 2008, Rick Nash scored an incredible goal against the Coyotes #Hockey365 #CBJ pic.twitter.com/Gs29t2x0Qx

“I can remember watching that game and seeing him score that goal. I was alone when I was watching it, but you see it happen and go nuts,” Farver said. “You realize that it is such a special goal and they’re still celebrating it today.”

It’s the memories that were almost overwhelming at times, for both the fans and Nash himself.

“One of the best ones is probably when we presented the Rocket Richard Trophy and I was out with an injury and me and Mr. Mac (founding owner John H. McConnell) got to go on the ice in front of the fans on the red carpet and take our picture and present it to the fans,” Nash said.

“You're playing for a group of fans early on where it seemed like we're always the underdog. Everyone took us lightly,” Nash said. “When you put that jersey on, you try to prove people wrong. And that's how that's how I looked at it. “You try to gain that respect and earn that respect that Blue Jackets deserve, but you have to earn it

Nash earned it, all right.

He’s got the respect of some of hockey’s finest dignitaries in John Davidson, Ken Hitchcock Doug MacLean, who put the exclamation point on Nash’s pre-game ceremony.

“From the very first day he was here, what blew me away was the way he when he walked into the dressing room as an 18-year-old, how he handled himself so well and the players respected him immediately,” MacLean said.

MacLean was the man who orchestrated a trade with the Florida Panthers to select Nash first overall in the 2002 draft. The “GM” has made a lot of moves over a 24-year career in professional hockey, but none as important as selecting Nash.

What MacLean also organized were several meet-and-greets with fans over the years. Of course, the Bowden’s from North of the border attended one such event.

It’s where Matt ended up with Nash’s signature right in the middle of his No. 61 jersey and is a memory he won’t soon forget, particularly after Saturday night.

“Being able to just talk with, at the time, like your idol, was pretty cool,” Matt said. “It was a nice little relationship, that started in London.”