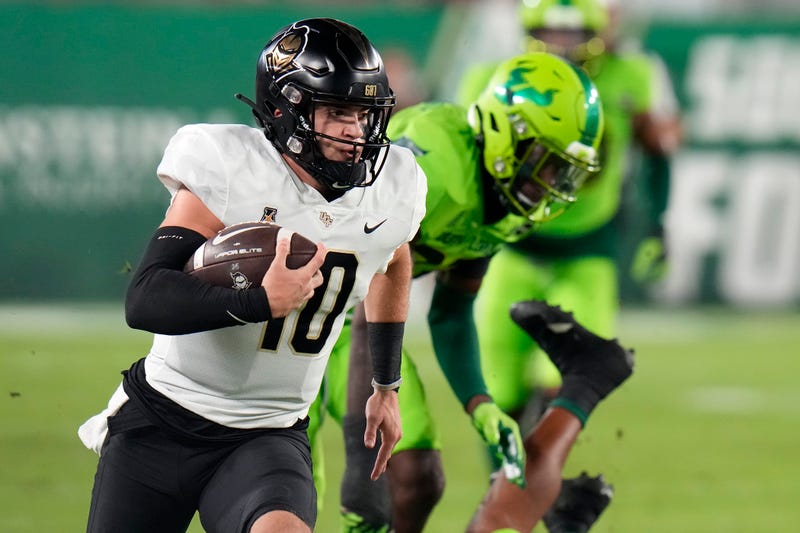 It's College Football Championship Weekend! 92.9 FM ESPN is Memphis' SEC Station. Listen to the SEC Championship (LSU vs. UGA) Saturday at 3:00 p.m. live here on 92.9 FM ESPN. 92.9 FM ESPN's Jeffrey Wright was on the Geoff Calkins Show on Friday (12/2/22) and listed his picks for some of the games, including UCF vs. Tulane in the AAC Championship. Listen here:

There is one game this championship weekend that truly feels like winner takes all.

No. 18 Tulane hosst No. 22 UCF in the American Athletic Conference title game Saturday. The winner is all but guaranteed a spot in a New Year's Six bowl; that would be the Cotton this year.

The loser, of course, still goes bowling, but the fall will be steep. How's the Gasparilla Bowl in Tampa on Dec. 23 or the Birmingham Bowl on Dec. 27 sound as a consolation prize?

Green Wave vs. Knights is a bit of glimpse at the future, when conference title games will routinely decided which team gets in a 12-team playoff with the loser left out. There will also be plenty of situations where the ramifications of the conference championship games are similar to what is going to happen this Saturday in some of the Power Five leagues.

No. 1 Georgia, No. 2 Michigan and No. 3 TCU all enter their title games with CFP spots seemingly secured to various degrees.

The teams they are playing (No. 11 LSU vs. Georgia; No. 13 Kansas State vs. TCU; and Purdue vs. Michigan) have no chance to get into the four-team playoff. But in the proposed new system they would be able to earn their way in by winning the conference.

Each of the 10 conference championship games this weekend is intriguing in its own way. So let's rank 'em and pick 'em with lines by FanDuel Sportsbook:

The Trojans (11-1) are fourth in the latest playoff rankings. A victory locks up a spot. A loss probably gives No. 5 Ohio State a shot at the field when it is announced on Sunday. Also on the line is the Heisman Trophy. USC's Caleb Williams appears to be one more good game away from virtually locking up the award. This game also determines who plays in the Rose Bowl. Can a future Big Ten team break the Pac-12's five-year CFP drought? ... UTAH 38-35.

There are still some doubters of the Horned Frogs (12-0) and loss here would unquestionably open a debate about whether they should remain in the CFP top four. The only teams to make the playoff after losing a conference championship were Georgia last year and Notre Dame in 2020, its one season as a guest member of the ACC. Like Notre Dame, TCU is unbeaten heading into the title game and playing an opponent it beat in the regular season ... KANSAS STATE 31-27.

Knights won the regular-season meeting and are trying to earn a third trip to the New Year's Six since 2017. Tulane's last major bowl appearance came in 1940 (Sugar Bowl) ... UCF 28-24.

Tigers did beat Alabama so maybe they have another upset in them. But the Bulldogs didn't win the SEC last year on the way to a national title and consider that unfinished business ... GEORGIA 35-14.

Winner goes to the Orange Bowl. Its also another chance for Tar Heels QB Drake Maye to make a case for the Heisman and at least earn a trip to New York as a finalist ... CLEMSON 34-24.

No. 2 Michigan (minus 16 1/2) vs. Purdue, Big Ten championship at Indianapolis, Saturday

North Texas at No. 23 UTSA (minus 8 1/2), Conference USA championship, Friday

Roadrunners try to make it two straight conference titles before they depart for the American. UNT is on its way the AAC, too ... UTSA 35-24.

Trojans trying to top off a 10-win debut season for new coach Jon Sumrall. Chanticleers have had an odd end to the season without injured QB Grayson McCall ... TROY 28-21.

Toledo (minus 1 1/2) vs. Ohio, Mid-American Conference championship at Detroit, Saturday.

Difference could be the health of Rockets QB Dequan Finn. Ohio's star QB Kurtis Rourke is already out with an injury ... TOLEDO 31-24.