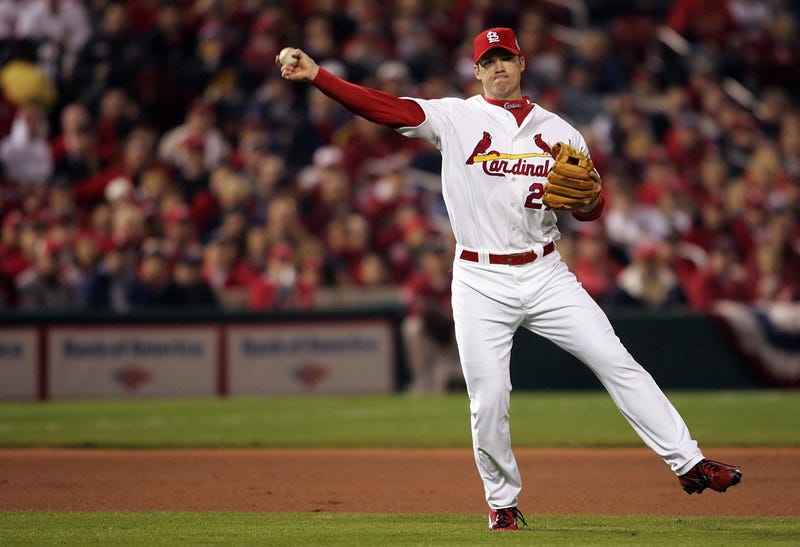 ST. LOUIS, MO., January 24, 2023 – The St. Louis Cardinals congratulate former third baseman and Cardinals Hall of Famer Scott Rolen, who earned selection this evening to the National Baseball Hall of Fame. Rolen was the lone player who received the necessary 75 percent of all ballots cast by the Baseball Writers’ Association of America (BBWAA).

“On behalf of the entire St. Louis Cardinals organization, I would like to congratulate Scott Rolen on the well-deserved honor of being selected to the National Baseball Hall of Fame,” stated Cardinals Chairman Bill DeWitt Jr. “Scott was a cornerstone of our infield and lineup during his six seasons in St.
Louis, and helped create many fond memories as part of the great Cardinals
teams of the mid-2000s.”

Rolen, a standout three-sport athlete at Jasper (Ind.) High School in
baseball, basketball and tennis, was originally drafted and signed by the
Philadelphia Phillies in the second round of the 1993 MLB Draft. He played in
325 minor league games before making an instant impact in the Major Leagues with his debut on August 1, 1996 versus the Cardinals, starting and playing both ends of a doubleheader at Veterans Stadium.

He led the Phillies in games played (156), runs, home runs, RBI and tied for the team lead with a career-high 16 stolen bases. Rolen was the first Phillies player to win rookie honors since Dick Allen in 1964.

The slick-fielding third baseman would go on to play 17 seasons in the majors covering 2,038 games while earning eight Rawlings Gold Glove Awards, fourth-most all-time among third basemen only to Hall of Famers Brooks Robinson (16), Mike Schmidt (10) and current Cardinals third baseman Nolan
Arenado (10). Rolen would add a Silver Slugger Award in 2002 and selections to the Major League Baseball All-Star Game seven times including four straight seasons with the Cardinals (2003-06). He finished his career batting .281 with 316 home runs, 1,287 RBI, 517 doubles, 43 triples, 1,211 runs scored
while amassing 2,077 hits and a .855 OPS.

In Game Seven of the 2004 National League Championship Series, Rolen’s two-run home run off Houston Astros starting pitcher Roger Clemens in the 6th inning, broke a 2-2 tie, shaking Busch Stadium II and sending the Cardinals to their first World Series in 17 years. Rolen played in 32 postseason games for the Cardinals, and concluded his postseason efforts by hitting safely in his final 10 postseason games, scoring a run in nine of them.

Rolen will become the 54th individual with ties to the St. Louis Cardinals organization to be inducted into the National Baseball Hall of Fame during its induction ceremony to be held on Sunday, July 23, 2023 in Cooperstown, N.Y., joining fellow Class of 2023 member Fred McGriff who was unanimously elected by the 16-member Contemporary Baseball Era Committee in December.