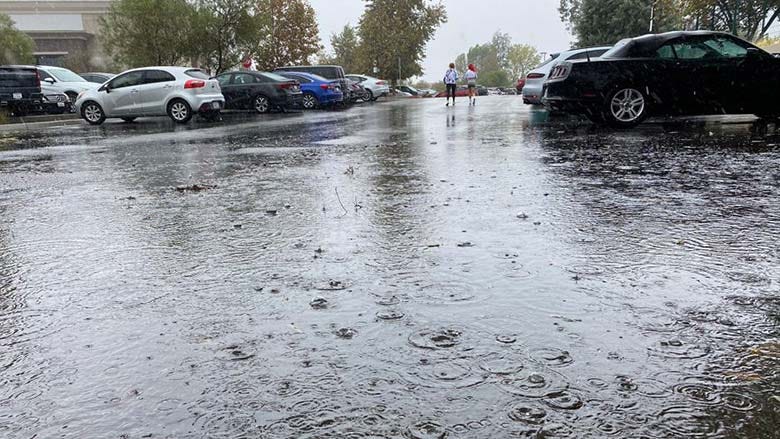 Grey skies and puddling as a strong storm moved into the L.A. Region on Oct. 25, 2021, following 24 hours of rain and flooding in Northern California and the Bay Area. Photo credit Jon Baird, KNX 1070
By Marie Estrada, KNX 1070 Newsradio

Southland residents are being asked to slow down on the roads Monday, as the area awaits anywhere from half an inch to nearly two inches of rain, according to the National Weather Service.

The Pacific storm system has already gushed over Northern California, prompting landslides in the Sierra and breaking records in Sacramento with nearly six inches of rain in just 24 hours.

The storm is expected to hit the area around 10 a.m. Monday, with the heaviest rain falling between noon and 3 p.m., NWS said. The forecast also calls for the possibility of minor flooding, 10-15 mph winds and dangerous surf. 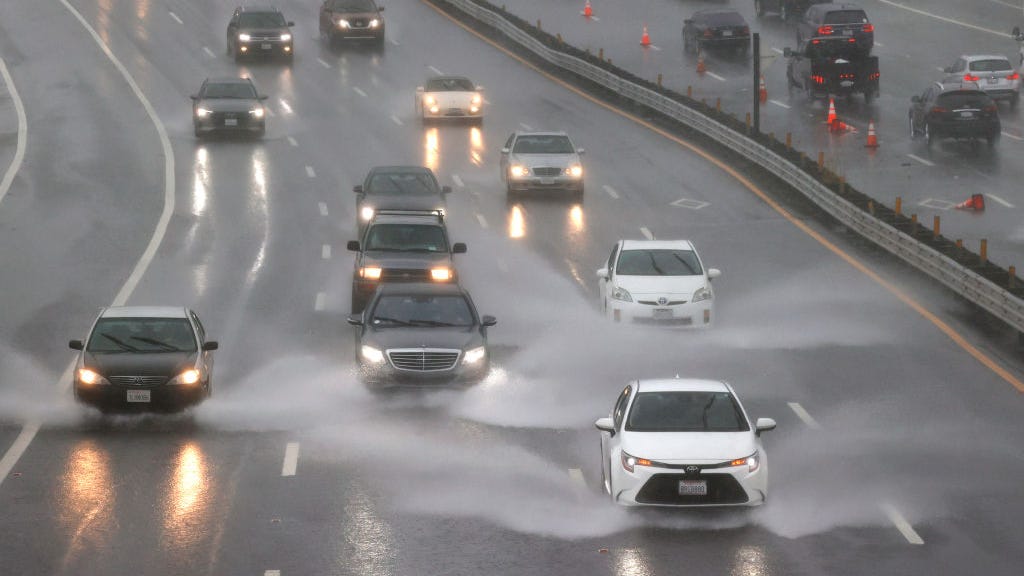 To monitor the forecast in your exact location, click here.

The rain and fog are moving into the area as you can see here. This is the #405fwy thru the #SepulvedaPass. Expect a slower than usual drive. The latest @KNX1070 @AlertWildfire pic.twitter.com/OL6AKW5Hj8

Surf and Water Warnings
A high surf advisory is in effect from 11 a.m. Monday through 3 a.m. Wednesday. NWS said frequent and strong rip currents are expected and warned that waves in Ventura and L.A. Counties could hit anywhere from six to 12 feet.

A water contact advisory has also been issued as a result of the storm, according to WaveCast, as the weather will “increase the risk of bacteria contamination in the surf zone from runoff.” 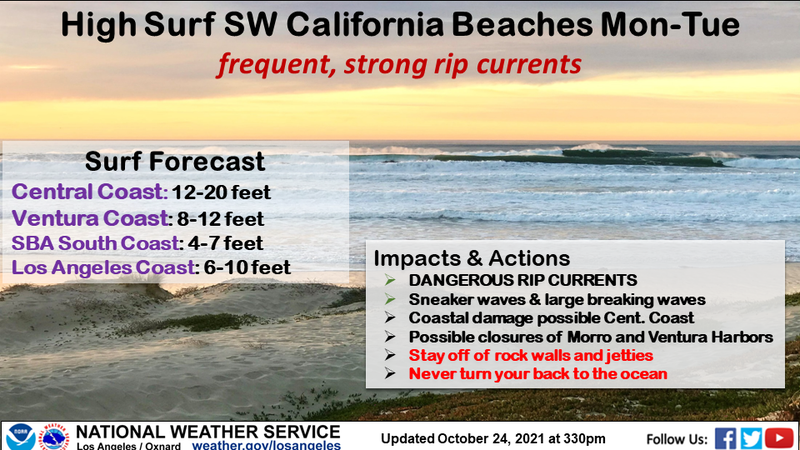 Flooding & Evacuations
Los Angeles County:
Rainfall rates are not expected to create concerns for older burn areas such as the Bobcat or Ranch 2 fires, according to reports by City News Service.

However, a Flood Advisory is in effect through 4 p.m. Monday, as roadways will likely be flooded and have some debris.

Santa Barbara County:
A Shelter In Place Order is in effect for all people in the Alisal Fire burn area. Residents are being asked to go to the innermost room of their home or to higher ground (such as a second floor) and stay inside until further notice.

An Evacuation Order that went into effect Sunday also remains for residents of the burn fire area. All those who left homes and businesses on Sunday in the following areas are asked to keep away until roads are fully evaluated. That order applies to areas west of Las Flores Canyon, east of Mariposa Reina, south of West Camino Cielo and down to the ocean. For animal evacuation assistance call the Animal Services Hotline at 805-681-4332.

A Flash Flood warning is in effect in the area through 11:15 a.m, following reports of .91 inches of rain per hour in Refugio Pass.

The County has provided links to real-time rain and debris monitoring cameras here.