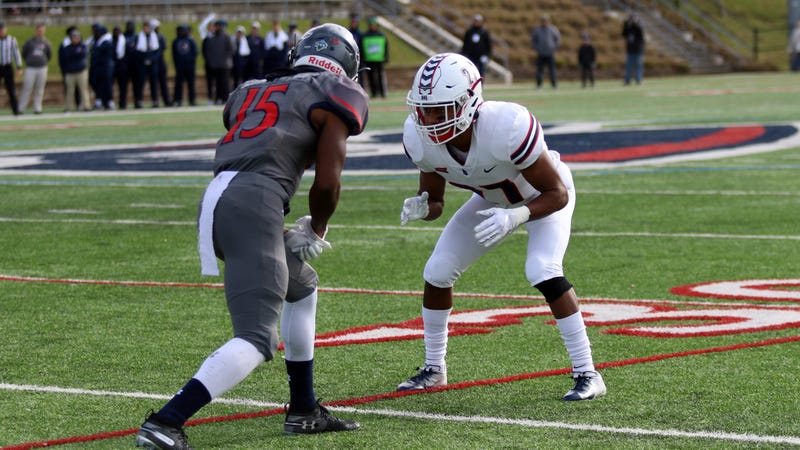 PITTSBURGH (93.7 the Fan) – As he prepares for a next step in his career, Duquesne corner Reid Harrison-Ducros continues his work with a Super Bowl MVP in Texas.

“It’s honestly a blessing, not a lot of people have him as a mentor to them,” Harrison-Ducros.  “Many people would just kill to have a couple of minutes with him.”

Him is Cowboys corner Larry Brown, who had a pair of interceptions that clinched a 27-17 win by Dallas over the Steelers in Super Bowl 30.

“When I got to Duquesne and saw the Steelers fan base, ‘cause everybody there wears yellow and black, and if you talk anything bad about the Steelers, it might be a fight to be honest,” Harrison-Ducros said of discussing his relationship with Brown.  “Seeing how diehard the Steelers fan base is, I really never brought up that I was really good friends with Larry Brown.  I just kept that in the back pocket.”

The Duquesne corner said that half-laughing.

Hard work, stay clean and prepare are the three big pieces of advice Brown has given Harrison-Ducros.  Brown also showed him out to get the most out of watching film, saying they’ve been working together since Harrison-Ducros was in the sixth grade.

Profootballnetwork.com says Harrison-Ducros is an underrated prospect because of his agility and impressive change-of-direction skills.  The NFL draft information website says the Duquesne corner has elite speed, running  a 3.85 short shuttle and a L-drill at a 6.42, which is among the best recorded by this year’s draft eligible players.

The 5’10”, 185 pound defensive back came to Duquesne after two years at Boise State and was 2019 All-NEC First Team and second in the conference with four interceptions.

“The only difference I really saw about FBS and FCS is depth on O-line and D-line because the bigger schools have more money and more scholarships to offer and more resources,” Harrison-Ducros said.  “Skill wise, it’s basically neck and neck.”

The transfer was part of the first ever Dukes FCS playoff win after capturing the Northeast Conference championship in 2018.

“It was the first championship I had ever won since Pee-Wee,” the Colleyville, Texas native said.  “Middle school and high school, I never won anything past the regular season.  So to do that in my first year there, with everything that went on, was surreal.”

It wouldn’t be unprecedented for a player from Duquesne to make an impact in the NFL.  Back in 2003, Leigh Bodden went from Dukes star defensive back to hook on with the Browns as a nickel back and special teamer.  Bodden would play nine years in the NFL with 18 career interceptions.

Like Bodden, Harrison-Ducros expects to begin his career as a nickel back.

Repeating history starts with someone giving him a shot this weekend.