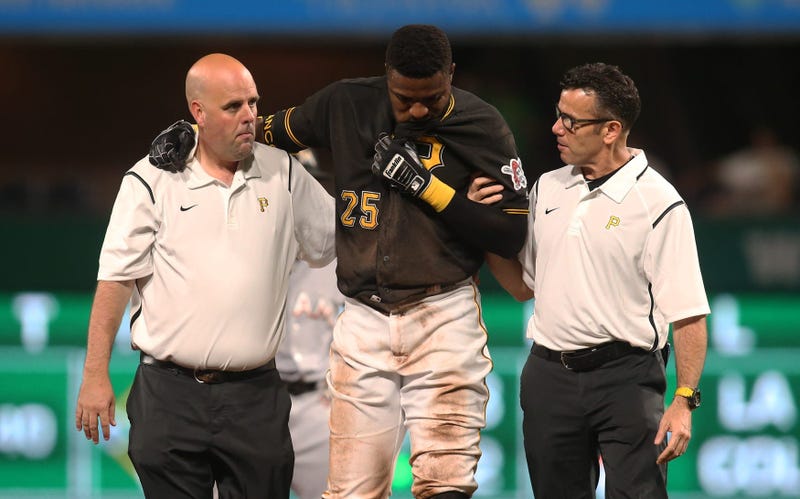 BRADENTON, FL (93.7 the Fan) – While he’s not played in the field yet in a game setting this spring, Pirates outfielder Gregory Polanco says he’s very close as he returns from shoulder surgery in September.

“I feel way better then when Spring Training started,” Polanco said.  “I started throwing, I probably will play soon.   I’ve been putting in a lot of work to be here right now.  I feel grateful to be able to play the game soon.  I feel good, man.”

Polanco said he’s been able to throw to bases and cutoff men while working out at LECOM Park and Pirate City.

“I feel very close because I see my progress,” Polanco said.  “When I throw I don’t feel any more pain or nothing.”

Pirates Director of Sports Medicine Todd Tomczyk said on Wednesday that Polanco is ramping-up his throwing program and has moved from throwing 120 to 150 feet.  Tomczyk said they need to find where Polanco’s sweet spot for throwing distance is this year.

“He can get it further (than 150 feet),” Tomczyk said.  “I don’t think there is any set distance, it’s really the style.  It’s really the mechanics and it’s really how quickly he can get it in to the cutoff man and how he feels.  So there really isn’t any specific distance in mind.  The distance is what a major league right fielder is required to do.”

Last year Polanco hit over .300 in June and July and had hit safely in all of his September games before the injury.  The left-handed hitter said he’s working on his timing at the plate in minor-league games and also in the cage.

It’s not easy for a guy the Pirates rely on, to watch his teammates get ready for the season while he stays behind to eventually join the team.  The 27 year-old says he realizes he has to be smart returning from a dislocated left shoulder and labrum injury.

“It’s very tough because I like to be in the field,” Polanco said.  “This is what I love.  Sometimes I have to keep a smile and be smart about my shoulder.  This is not a simple injury, it’s bad.  You have to be patient and be smart, that’s the right move.”