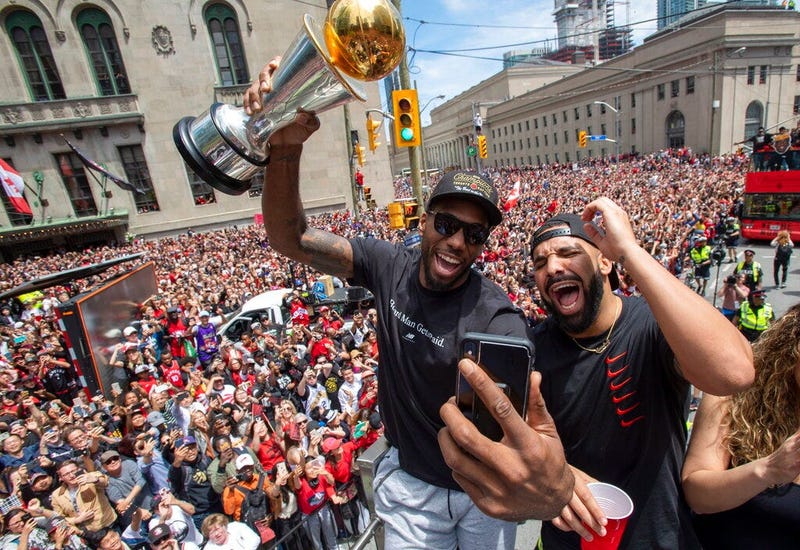 TORONTO (AP) — The title won and the draft over, the Toronto Raptors turn to the next order of business: keeping Kawhi Leonard.

He is expected to opt out of the final year of his contact and become a free agent June 30. The two-time NBA Finals MVP and three-time All-Star is likely the biggest prize on the market.

Toronto can offer Leonard a five-year deal worth about $190 million — one year and some $50 million more than any other suitor.

After a season-long soft sell that ended with the team's first championship and a massive downtown parade, the Raptors have just more than a week to craft, plan and present their final pitch to the best player in franchise history.

"We obviously want to put a couple of special touches on it," general manager Bobby Webster said Friday. "But, yeah, we're comfortable. Throughout the year we've been talking about the things that we can offer and what made this season so special. I think we'll just continue that."

Injured for all but nine games in his final season with San Antonio, Leonard played 60 regular-season games for Toronto and 24 more in the postseason, increasing his minutes once April arrived.

Asked about his future at Monday's parade and rally, Leonard said he wasn't worried about the tight timeline for his big decision.

"You don't need too many days to figure it out," he said. "We'll see what happens. Once that time comes, then we'll all lay the pros and cons out."

After averaging career-bests of 26.6 points and 7.3 rebounds in the regular season, Leonard raised his averages to 30. 5 and 9.1 in the playoffs. With 22 points in the June 13 clincher over the Warriors, he passed Allen Iverson for fourth place and Hakeem Olajuwon for third on the NBA's single-postseason scoring list.

Center Marc Gasol, acquired from Memphis at the trade deadline, also has a player option for next season, the final year of his deal.

"He's earned the right to think about this and we'll respect it," Webster said. "Obviously, we'd love to have him back but this is his decision and it's a big one for him."

Finding time for draft and free agency preparation amid the whirlwind of a long NBA postseason has given Webster a new appreciation for his colleagues in the Warriors' front office, where such a schedule has become routine.

"We asked Golden State how did they do this five years in a row," he said.

"Even throughout the playoffs we were meeting and we were discussing stuff," Webster went on. "You know the season is going to come to an end at some point, so you do want to be prepared. It's a little bit different of a mindset to really talk about the summer when the season is still going on but we did it, and so we feel comfortable."

Webster said he and coach Nick Nurse discussed plans while the team was flying back and forth from California to Toronto four times during the finals.

"We had a lot of long flights," Webster said. "We sit close on the plane so we can have those chats."

Toronto made its first draft selection since 2017 Thursday, taking Dewan Hernandez from the University of Miami with the 59th pick. The 6-foot-11 Hernandez sat out this season because of his dealings with an agent. Facing additional punishment next season, the junior from Miami turned pro instead.

"To some extent, maybe we got lucky that he didn't play last year," Webster said. "He kind of flew under the radar. We all felt like had he had a full season, he wouldn't have been available at 59. We think we got a really good player."

Webster said the Raptors had "intense discussions" about acquiring a pick late in the first round or earlier in the second but couldn't strike a deal they liked.

"We weren't willing to sacrifice any of our future assets to get it," he said.