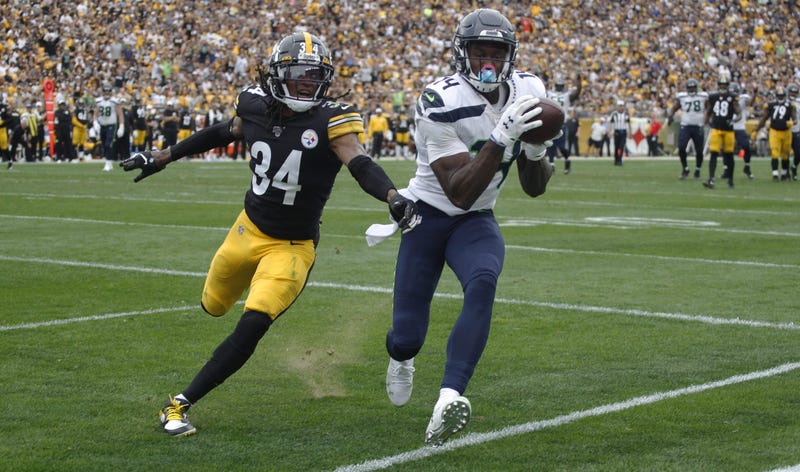 Pittsburgh, PA (93.7 The Fan) - Seahawks quarterback Russell Wilson chewed up the Steelers defense in a 28-26 win at Heinz Field, posting numbers very similar to Tom Brady's a week before. Wilson completed 29 of 35 for 300 yards, three touchdowns and zero interceptions.  The Steelers have allowed 641 passing yards, six touchdowns through the air and 61 points in an 0-2 start.

"Anytime they score points on us it sucks," said cornerback Joe Haden.  "We have to go look at the tape, figure out what exactly is going on and try to stop the bleeding.  A couple of things didn't fall our way, but it wasn't terrible."

Haden said getting off the field on third down and tackling were issues, but felt their communication was better.  Rookie inside linebacker Devin Bush didn't share that opinion, at least on the two touchdown catches by unheralded tight end Will Dissly.

“Lack of communication," Bush said.  "Still something we’ve got to clean up, got to get a lot better in.”

Unfortunately for the Steelers, the communication between NFL headquarters and the field came through loud and clear.  Seahawks coach Pete Carroll challenged a non-call against safety Terrell Edmunds midway through the fourth quarter, claiming Edmunds interfered with receiver Tyler Lockett.  Following a lengthy review, officiating chief Alberto Riveron agreed with Carroll.  Instead of facing a a third-and-20 from their own 27 yard line, the Seahawks were given a first down at the Pittsburgh 35.  Three plays later, DK Metcalf beat Edmunds for a 28 yard touchdown pass, which gave Seattle a 28-19 lead.

Free safety Sean Davis returned to the lineup after missing extended time with an ankle injury only to leave when he injured his shoulder in the third quarter.  Davis was being evaluated after the game and unavailable to the media.