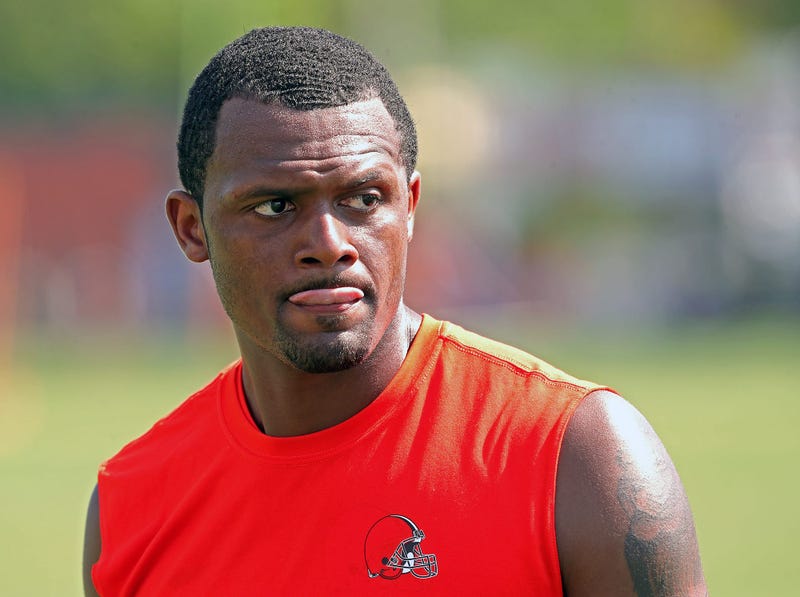 BEREA, Ohio – The NFLPA filed their reply brief to the NFL’s appeal of the Deshaun Watson discipline Friday afternoon.

Meanwhile, whatever plans or changes to the plan the Browns have for their starting quarterback situation for the start of the season appear to be on hold.

Browns head coach Kevin Stefanski hasn’t completely turned the car keys and starting reps over to backup quarterback Jacoby Brissett just yet while waiting for the results of the NFL’s appeal of former federal judge Sue L. Robinson’s ruling of a six-game suspension plus all massage therapy be coordinated with the Browns and Watson is not to run afoul of the conduct policy or law enforcement.

“I think with our plan we'll just kind of await clarity on the situation, but just continue to move ahead with what we're doing,” Stefanski said prior to Friday’s practice.

“I hope in the next few days that those types of questions get answered.”

While it might be challenging or annoying for Stefanski, it’s nothing new in Cleveland where quarterback drama has reigned supreme since 1999.
Whoever starts Week 1 will be the 18th different opening day starter and 33rd starting quarterback for the franchise in the expansion era.

“Like I've said to you guys from the beginning, we're just controlling what we can control,” Stefanski said. “[We] Understand that this is a process and I'll continue to make decisions with the information that I have.”

But the Watson situation is in a completely different stratosphere.

The NFL continues to seek a much harsher penalty after Robinson ruled that Watson violated the conduct policy in three ways – sexual assault as defined by the NFL, endangering the well being of another person and compromising the integrity of the NFL by using his stardom as a quarterback to solicit professional services with a sexual purpose.

Watson has maintained his innocence amid the allegations and said he has done nothing wrong.

The NFLPA, which is defending Watson, is not challenging Robinson’s discipline but they are challenging the league calling for a more extensive punishment.

Although Robinson referred to Watson’s actions as predatory, she made her ruling based on existing league policy and previous precedent.

The Watson conversation and news has been non-stop since Cleveland acquired the three-time Pro Bowler from the Texans for six draft picks, including three first rounders, and gave Watson a fully guaranteed $230 million contract.

“There is a lot going on obviously. We know what is going on, but we are so focused about what we are doing,” All-Pro guard Wyatt Teller said.

“It is only a distraction if you turn on the TV and you are listening to it and everything like that. I do not have any social media so I stay away from everything. It has been pretty quiet in my household at least, but I know that it is the talk of the town and there has to be something to talk about. Obviously, it is big, but we are focused so much on what we are doing.”

Watson settled 23 lawsuits alleging sexual misconduct related to massage therapy while a member of the Houston Texans. One case remains unsettled and a 25th suit was dropped after a judge ruled the accusers must use their names in court filings.

The Texans quickly settled 30 lawsuits alleging the team enabled Watson, mere weeks after they were filed.

Settlements are not an admission of guilt, and it is clear Watson, and the Browns, are anxious to close this chapter and turn the attention on the field to him leading the franchise as their quarterback.

“Obviously, we want to know what is going on and be done with it. I think that if any team was in that situation, that is what they would want,” Teller said.

Second year cornerback Greg Newsome II is also trying to keep his mind and focus on task but keeping his head buried in the sand isn’t easy.

“I would definitely like to see it resolved, but at the end of the day, that's none of my business. They're going to take their time with it, and we've just got to focus on ourself.”

Should Watson be unavailable for six games, or the season, what is clear is the trust and belief the team has in Brissett, and they are not allowing this situation to dampen any excitement for the upcoming season.

“We're excited for this season as a team. The guys are very excited about 2022,” Stefanski said. “You mentioned the fans, we've definitely felt the energy from these fans. In terms of specifics past that, I don't know it's that time yet. But yeah, I think the guys are excited about the work they've put in so far and they're certainly looking forward to competing come September.”