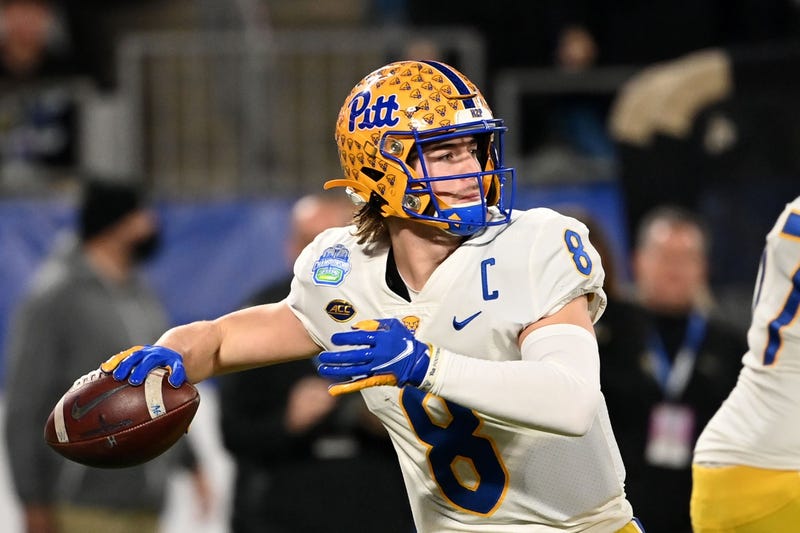 PITTSBURGH (93.7 The Fan) – A finalist for the Walter Camp and Davey O’Brien Awards, now Kenny Pickett has a chance to win the big one, the Heisman Trophy.

The quarterback of a team no one picked to win the ACC will be in New York on Saturday with three others as a finalist for the most prestigious honor in college football, likely all of college sports.

Pickett threw for 4.319 yards with 42 touchdowns and seven interceptions, completing 67% of his passes.  The New Jersey native rushed for 233 yards with five touchdowns.

The front-runner appears to be Alabama quarterback Bryce Young, especially after the freshman threw for 421 yards and three touchdowns against a Georgia defense considered the best in the nation.  There is also Ohio State redshirt freshman CJ Stroud.

There are other comparisons-does Young get the benefit for doing it as a freshman and Pickett playing his fifth year.  Young has more four and five-star athletes around him, does that help Pickett?  Young plays in what is perceived to be a better conference, how does that play in?

The other finalists for the Heisman Trophy are Young, Stroud and Michigan senior defensive lineman Aiden Hutchinson-third in the nation with 14 sacks, adding 15.5 tackles for loss, a pair of forced fumbles and three passes defensed.  Plus, he captained the Wolverines to a first win over Ohio State in Jim Harbaugh’s coaching career, a Big 10 Championship and into the College Football Playoff.