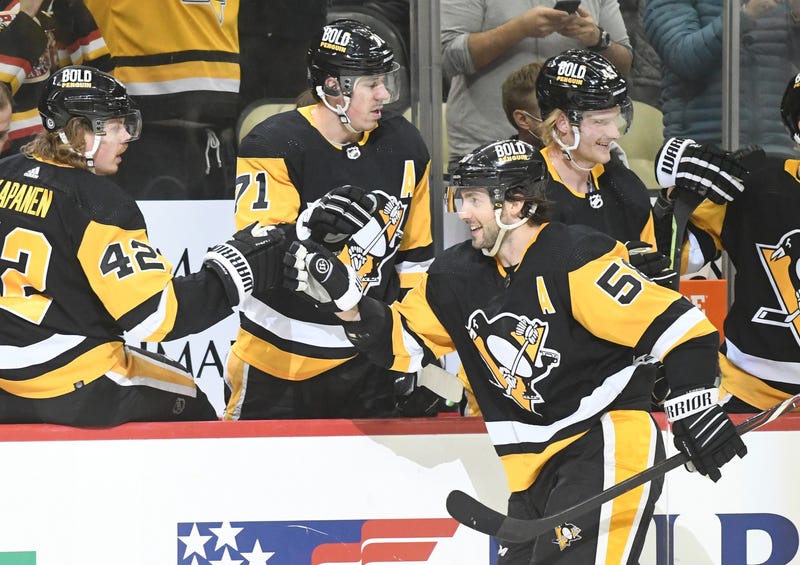 PITTSBURGH (93.7 The Fan) – Reaction from Pens management is what you would expect and clear, their concern right now is about Kris Letang the human, not the hockey player.

The news is good, considering. Letang wasn’t in the hospital as the team found out about it after the game on Tuesday. He was in the locker room with his teammates.

“These guys, you could see the concern on their face when I informed him after the game (Tuesday),” said Pens Head Coach Mike Sullivan. “It was important he was present so they could see him and see he was doing well. Knowing this group, the way I know them, they will rally around Kris. They will rally around him on the ice as well.”

Letang was good enough to be with his teammates even after suffering a stroke That seems to confirm the initial diagnosis of it being much less severe than the one he suffered in 2014.

“I spoke with him Monday night on the phone and I spent the second period with him yesterday,” said Pens GM Ron Hextall. “I’m shocked at how well he seems to be doing and how he is taking it. He understands. He’s been through this before.”

“Everything we got back from a testing standpoint has been very encouraging,” Sullivan said. “We are all grateful for that. We are all hopeful that he’s going to be ok and that he can continue to play and help us win. The biggest challenge for me today was to keep him off the ice. He wanted to skate today. That’s an indication of Tanger’s passion to play and wanting to get back to his team. The biggest thing for us is everyone is concerned because we all care for him.”

Letang is in good shape right now because, in part, he recognized he wasn’t right. He was suffering from a migraine headache and called his doctor. The 36-year-old continues to go through tests, but there are no lingering side effects right now. Hextall saying the will seek second opinions because it’s about getting Letang back to full health, but everything is as good as it could be.

“We are all concerned for Kris because we care about him,” Sullivan said. “Stroke is a scary word.”

“He’s played with some of these guys for a long time. They are close friends off the ice. He has a family. When something like this arises, it puts things in perspective for all of us. I’ve had the privilege to coach him for seven-plus years now and I know how I feel about it.”

“It’s hard to put into words,” Hextall said of the team’s reaction. “Tanger has been here 17 years. The level of hockey he’s played for as long as he’s played is absolutely incredible. The level he’s continued to play at, at his age. The type of shape he’s in.”

“I’ve been here for less than two years and I realize how much he means to this team and this city. He’s a warrior. He’s a terrific human being and one tough SOB.”

There is no timetable for a return, nor is there a rush to get him back. Sullivan said no one player can replace Letang and Hextall said they have options to fill his role on the blue line.
But what these players dedicate their lives to, just didn’t seem as important after a team meeting following a loss.

“They care about each other as people, first and foremost,” Sullivan said. “We compete hard. We live and die with winning and losing every night, but at the end of the day we care about people. He’s a guy that I think means a lot to our team.”

Now that tough SOB works towards the goal he is optimistic of accomplishing, getting back on the ice and back to a point where a win or a loss seems like life or death again.