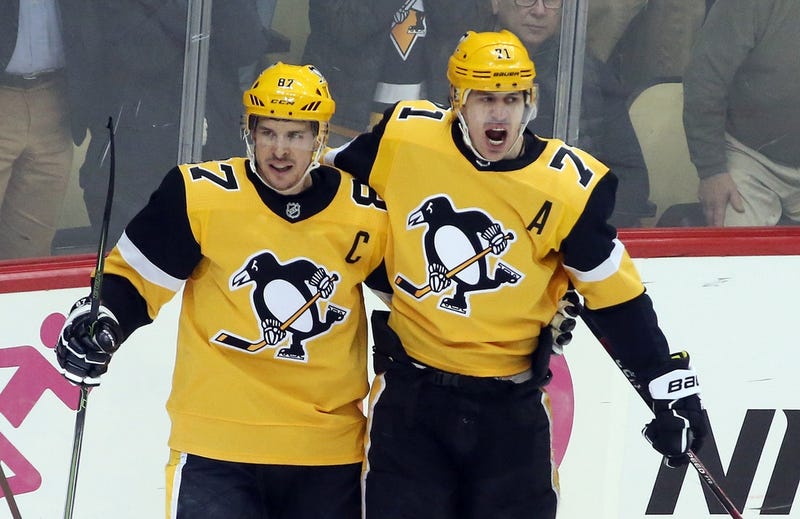 PITTSBURGH (93.7 The Fan) – The season careening downward early on. A seven-game losing streak and five of those by multiple goals. Thoughts of 2005 when Rico Fata, Konstantin Kiltsov and Michel Ouellet wore black and gold and the last non-playoff season. Until once again they were saved by a pair of superstars.

Sidney Crosby named the NHL’s First Star of the Week after leading the league in goals, assists and points across four games. He had his 36th and 37th career four-point games and his 80th career game-winning goal.

At 35, Crosby is eighth in the NHL in scoring, as many points as Nathan MacKinnon and more than Jack Eichel, Mitchell Marner, Artemi Panarin, John Tavares and Sebastian Aho. His lead-by-example captainship over the last couple of decades needed as much now as ever.

Spoiled in Pittsburgh, another Hollywood moment Wednesday night as Evgeni Malkin buried the shootout winner in a 2-1 win over Calgary and extending the winning streak to four. It followed a pre-game video and in-person celebration of Malkin playing in his 1000th game on Sunday. Geno had another dramatic moment for his 79th career game-winning goal.

Management decided to go forward with four more years with the 36-year-old in the off-season. Malkin has 20 points in 20 games, 47th in the league and a couple of power play goals which should increase as that unit improves.

After a game in Philadelphia, the Pens are home for five straight games with 11 games at PPG Paints Arena between now and the Winter Classic in Boston. A quarter of the way through the season, the Pens are currently tied for the second wild card. Thanks to a pair of superstars who continue to expand their legend.