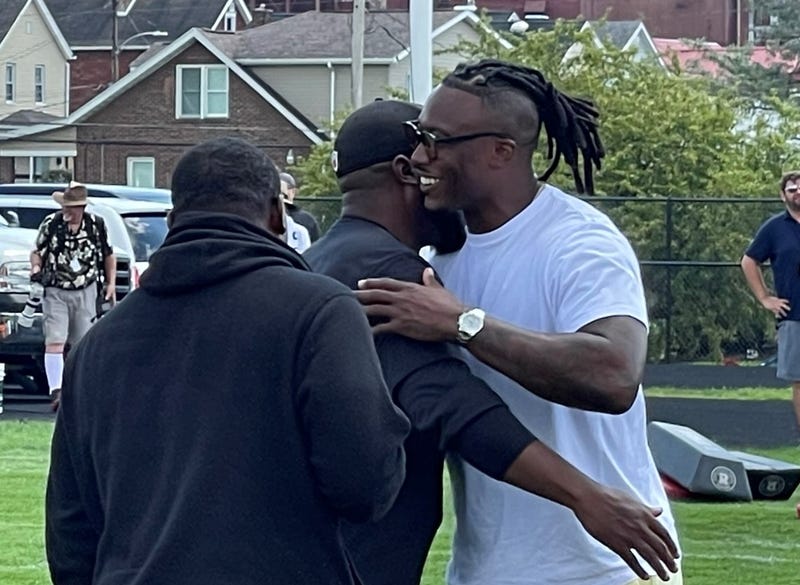 LATROBE, PA (93.7 The Fan) – In order to help him become a better player on-and-off the field, Steelers Chase Claypool turned to one of the most outspoken receivers in recent history.

It would seem to be a mistake on the surface.  What Claypool needs is discipline, some would say.  Not a guy who once called out one of his teammates publicly, has had emotional outbursts, even suspended by the NFL.  Claypool is working with Brandon Marshall.

The Pro Bowl receiver has grown up and matured over the years.  He’s looking to pass on what he learned and it started with a chance encounter in February.

“We were at the Super Bowl,” Marshall said at Steelers camp on Monday.  “He had his cast on, just had surgery.  I walked up to him and was brutally honest with him & said you have huge upside and super-talented, but you need to get your mind right.”

Ouch.  Claypool, to his credit, did not bristle at this.  Some may have played it off as some ‘old guy talk’ and kept moving.  The Steelers 2020 second-round pick became intrigued and said right there he would work with him.

Marshall has noticed Claypool since he was at Notre Dame.  He was following his career, but they had never had the chance to get together.

“I love the big receiver,” Marshall said of why he was interested.  “He’s special.  He’s put together well.  To be able to not only play the receiver position, but to play the position big.”

Marshall is trying to get Claypool to learn how to play as a big receiver.  He said so many try to teach one way, but it’s a different position when you’re 5’8” or 6’4”.  Claypool is learning how to better use his size to his advantage, and not just the obvious jump balls.  How to be more powerful with his hands to get off the line of scrimmage quicker and to use his frame to shield defenders.

That’s the physical stuff.  That’s pretty easy for Claypool, as Marshall said he’s got all the tools to be an elite receiver.  What he doesn’t have is what he mentioned earlier.  The conceptual part of the game.

“He’s already physically gifted,” Marshall said.  “It’s about mental.  Taking his time, taking it one day at a time and whatever happens, happens.  That’s the only thing he can control.  He put the work in this offseason.  Now we are going to put the whole thing together.”

Putting ‘the whole thing together’ actually means less time on the field.  Instead of catching balls for an extra 30 minutes after practice, leave the field and grab your iPad and start studying.

“I think the biggest difference is him having a better approach and a better understanding of how to watch film,” Marshall said.  “How to assess himself.  How to assess or evaluate a defensive coordinator.  Defensive back tendencies.  Communication with the quarterback.”

Marshall set up a dinner with himself, Claypool and likely Steelers starting quarterback Mitch Trubisky in Florida this offseason.  It’s part of showing the value of communication not just in the huddle.

“Seeing the defense before they do it, as they are doing it,” Claypool said of other lessons.  “Knowing how to watch film, how to set a schedule with your coordinator, receiver coach, your quarterback to talk about the film.”

Claypool said he’s seen early results and the game has slowed down for him this season as he’s progressing.  He’s getting the most out of his time and those conversations with coaches and teammates.

The Steelers receiver said he would get frustrated with himself watching tape last year, but is optimistic what he’s seen so far.  Admitting he’s buying more into what Marshall is selling because he’s been in those shoes, and recently.

Another area where Marshall believes Claypool can grow and improve is his dealings with fans and the media.  Whether that be electronically or in person, just learning how to be a professional.  There have been a couple of social media issues in Claypool’s short career, even though he considers himself pretty thick-skinned.

“I’ve seen people say some pretty harsh things, but I don’t let that damper my day,” Claypool said.  “I think the biggest thing for me is when I play by ass off and I’m playing through injuries.  I do as much as I can and I have a bad play or one human error and then the whole world hates me.”

“That’s kind of annoying for me.”

What Marshall has learned through several issues he put himself in is, for lack of a better term, ‘the Ben Roethlisberger method’.  You might have noticed as Roethlisberger’s career evolved, he would say he didn’t play well enough.  He would take the blame even when it was obvious it wasn’t his mistake.  A Pittsburgh native, Marshall developed the same routine.

“My tone after wins,” Marshall said.  “I always deflected.  My teammates were phenomenal, Jay Cutler was awesome, offensive line did a kick-ass job.  When we lose, I took the blame.  That’s on me, I have to do a better job as a leader in the locker room.”

Marshall said Claypool has been a sponge to his teachings, that Claypool wants to get better.  He’s also not lost any confidence.  As the third-year receiver told Marshall on his podcast he does with former Pitt star LeSean McCoy, that he is a top three receiver in this league.

For as glowing as Marshall was talking about Claypool, he wouldn’t go that far.  However, Marshall believes if Claypool puts a championship routine in place, why couldn’t a guy of his size, speed and skill become that.

“Anybody out there, you have to be able to look in the mirror,” Marshall explained.  “Understand who you are.  What you are trying to accomplish.  And then say it to yourself every (darn) day.”

On the surface it has the potential to be a volatile relationship, but maybe exactly what Claypool needs is a guy who’s made the mistakes.  Who is also the guy with 12,351 career NFL receiving yards and 83 touchdowns.  It could be that bond that finally unlocks the consistency inside the Steelers 24-year-old.