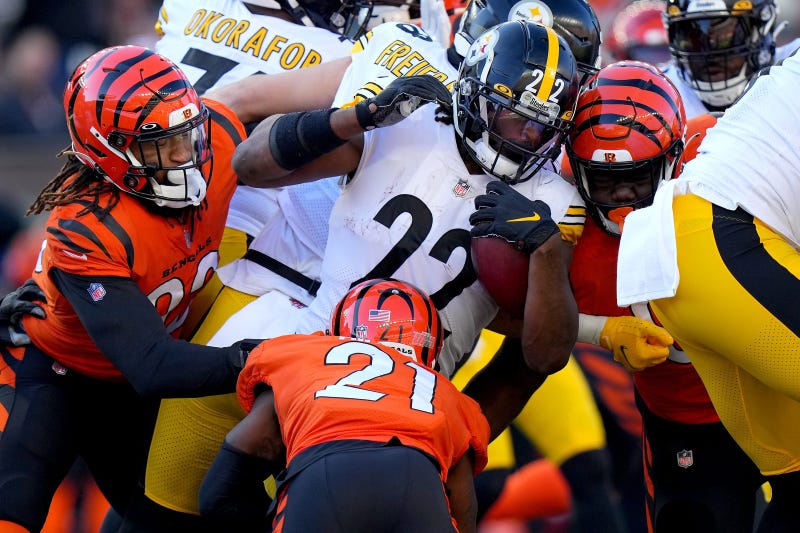 With injuries and illness leaving them even more lacking in the talent department, the Steelers cannot afford to make mistakes, especially mistakes that could – and should - be avoided, especially when it comes to offensive penalties.

Pittsburgh is actually in the middle of the NFL penalty pack, averaging 6.5 per game, but what makes it frustrating for coaches and fans is that two of the Steelers top playmakers are their biggest culprits.
Chase Claypool is the leader of the wideouts, flagged 7 times this season, while top receiver Diontae Johnson is right behind with 6.

“It’s not just those two, “Offensive Coordinator Matt Canada explained this week.  “We had a lot there going on early in the year and we got a little better at times.
Football is such a game of momentum, this play or that play is always a key to a game so they always seem to pop up at tough times.”

“Obviously there are different penalties – things that happen prior to the snap or post-snap penalties,” Canada continued, “those things are certainly controllable and we address those in that way. There are obviously in-the-battle penalties that we talk about and point out. All we can do is point it out. They’re all professionals, right, they understand they made a mistake and if there’s something schematically we can do schematically better we’re working at that.”

While Claypool has been flagged for offensive pass interference three times, he has also committed several avoidable penalties like the illegal formation and face mask penalties last Sunday in Cincinnati.
Johnson has 4 false start penalties to his discredit.

While Johnson has cured himself of the “drops” that had plagued him earlier in his career, those penalties haven’t helped while Claypool has dropped/missed quite a few catchable passes this season and also lost his footing a few times on otherwise well-thrown balls. Canada might look a lot smarter without those and other mistakes but he won’t blame his players.

“Nobody’s trying to go out and not do well,” Canada said, “nobody’s trying to do those things (but) we have to address it. Consistency is there at times but it has to be there more often. There are key plays in the games that we all see. We have to make those plays and minimize the negative plays. Can you teach it? We need to find it; that rhythm of making those plays, we need some of those chunk plays.”

“It’s 11 men doing their jobs on the field,” he went on.
“It’s us (coaches) putting them in the right place at the right time, the right guy at the right time. We had a little run there where we were doing it enough to win then we haven’t had that the last couple of weeks to we’ve got to find it.”

Only six weeks left to do it.