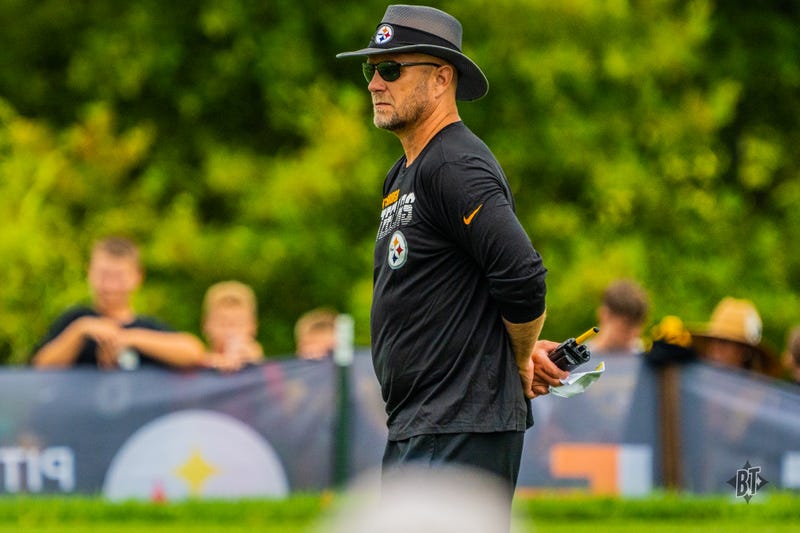 LATROBE, PA (93.7 The Fan) – Thought to be a two-man race to be the Steelers starting quarterback, Offensive Coordinator Matt Canada told 93.7 The Fan Mason Rudolph ‘has a great shot’ at winning the job.

“We base it on resume and what he’s done,” Canada told 93.7 The Fan before Friday’s practice.  “He’s getting the second reps right now, almost equal to, maybe slightly a little bit less than Mitch.  I think he’s been given a very fair shot, to this point in camp, it’s been exactly equal.”

“He’s made a lot of plays at times. He’s played very well at times. He has a great shot at it, he’s being treated that way. His history with our players & system is a positive for him.”

Canada also tells 93.7 The Fan he is realistic, saying while every rep and every play matter and there is urgency in everything they do.  It’s only a couple of practices into the entire season.

“We don’t want to minimize that, but it is a big picture decision,” Canada said of who their starting quarterback will be.  “We are going to go through this very methodically.  One great play or one bad play doesn’t set the depth chart.”

“We are going to get the entire picture and see where we go.”

Canada wouldn’t say when he feels like they would have enough information to make that decision.  Although he told 93.7 The Fan they have to see them all in preseason games and also how they react when they are mixed with different people.  So far, it’s been Trubisky running with the first team, Rudolph with the second and then Kenny Pickett.

As for his thoughts on the other quarterbacks:

“I really enjoy him as a person,” Canada told 93.7 The Fan about Trubisky.  “He’s very much a football student of the game, asks great questions, has great input.  I think he has a great way with the players just being himself.  He’s comfortable with his leadership skills.  He’s fun to be around and I think the players have responded very well to him.”

“Obviously Kenny is super-talented, super-great guy, ultra-competitive,” Canada told 93.7 The Fan about Pickett.  “I’ve enjoyed him since I started recruiting him (while working at Pitt).  Everything about him is great.  He has good plays and bad plays, just like Mitch and Mason have.”

“His desire to learn.  His leadership skills, or how he does it, is a little bit different than the other two.  Even as a rookie, he has his way of getting with guys and I think the players have responded to him and enjoy being around him.”

A decision is not imminent, nor should it be.  They have time and Canada says they are going to take it, but don’t count out Rudolph.