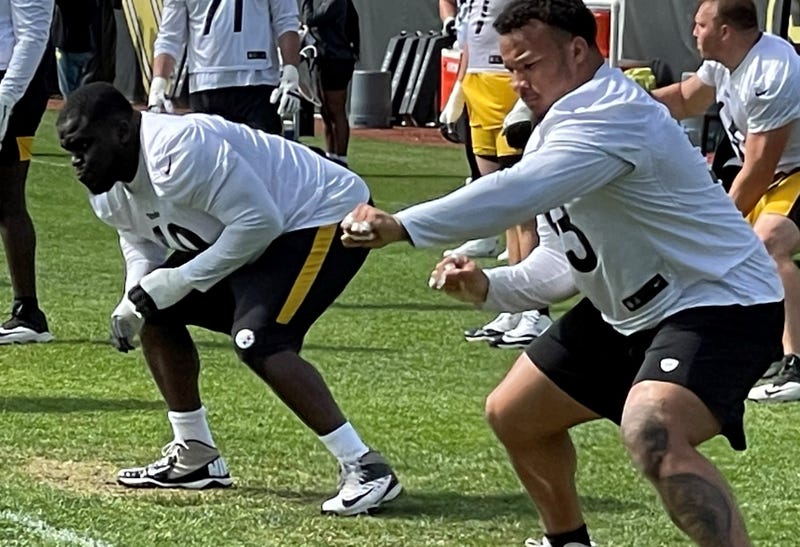 PITTSBURGH (93.7 The Fan) – Starting nine of nine games last year and most figuring he would be the starting left guard for the Steelers in 2022. When Kevin Dotson arrived back in Pittsburgh, he got a bit of a surprise.

Dotson had spent all off-season training in Dallas and working on strengthening both ankles.  Each had given him issues over his brief NFL career.  The 6’4”, 321-pound offensive lineman said about three weeks before OTAs began, he was finally 100%.

When he arrived to the team facility on the South Side, the 25-year-old found out he would be competing for a starting job.  He’s only started 13 games in the NFL and now will be battling with a second-year player with actually more career starts (15).

Kendrick Green took over the starting center position early in training camp last year.  It seems he lost it in mid-March as the Steelers signed Mason Cole to a three-year, $15.75 million deal.  Dotson said he’s not surprised its Green battling him.

“I think this is his more natural spot, it’s natural to think if they have someone for center,” Dotson said.  “It would be a natural move.”

Green started 29 games at left guard in college.  It was a bit surprising he was the Steelers starting center having only played three games there at Illinois.  He trained this offseason with former Steelers All-Pro center Maurkice Pouncey and his brother Mike, saying they didn’t work specifically at center.  It was more about working out and talking about the game.  He even admitted he wasn’t comfortable at center for most of last season.

Now Green is getting a new opportunity at an old position, but Dotson won’t give it up easily.

In other words, it was pretty easy for Dotson to keep his position at the University of Louisiana.  He admitted he was getting overconfident his junior year, thinking he could do whatever he wanted without any repercussions because of the lack of competition.  He was thankful to an assistant coach who would ‘humble him’.  The coach taught him how to be self-accountable regardless of anything around him.

Players told us Dotson was part of the starting group almost exclusively during team drills in OTAs and mini-camp.  As Mike Tomlin tells us often, don’t read too much into what happens in football in shorts.

A fourth-round pick in 2020 coming off his first normal offseason, Dotson will take the lessons he’s learned, his healthier ankles and try to be what he always dreamed of being as a life-long Steelers fan.  A regular starter in Pittsburgh.