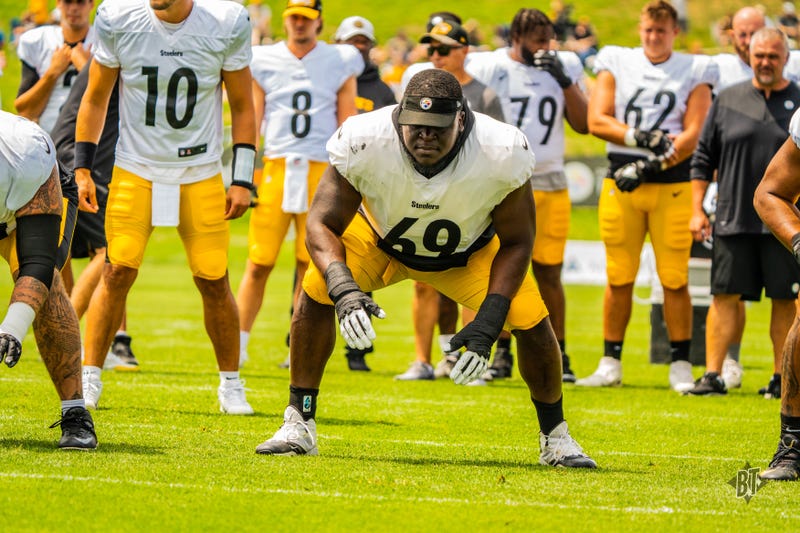 LATROBE, PA (93.7 The Fan) – Mike Tomlin said he won’t rule anyone out, but you know there are a number of players who won’t go in the Steelers preseason opener on Saturday. One of them is left guard Kevin Dotson.

One of three positions listed with co-starters due to the tight competition, Dotson is dealing with an ankle injury suffered earlier this week.  The third-year pro told 93.7 The Fan the injury is not severe, he called it a ‘tweak’.  Dotson said it’s not related to last year’s ankle injury that cost him time.  He said he will be ready to practice next week and they are being overly cautious right now.

“I just control what I can control, do what I can,” Dotson said Thursday.  “Do as much rehab as I can.  Do what I got to do to get to where I want to go.  When I get back, show off what I can do.”

Seemingly all off-season it was Dotson’s job at left guard.  He ran all of the reps with the first team offensive line until the end of workouts in mini-camp.  Now he is in a ‘two dogs, one bone’ competition with last year’s starting center Kendrick Green.  Does he feel like he’s in a heated battle?

Dotson wishes he was out there against Seattle admitting it’s getting old going against his teammates in practice.  He’s anxious to face some new people and not Cam Heyward.

“It’s like fighting your little brother or playing basketball against your little or big brother,” Dotson told 93.7 The Fan.  “Somebody who’s seen your moves forever and they know how to counter it.  They’ve been going against you for two-three years now, so they know what type of person you are.  It can get kind of tedious.”

Dotson believes the line has grown since really being put together in April.  They’re improved as the off-season and now training camp began.  He says they really have formed a bond.

“One of the most important things for offensive line,” Dotson said.  “We are a team within a team.  Our group is one and then we branch out and help everyone else.”

Final question of the interview, we asked him about the rookie generating all of the attention at camp, receiver George Pickens.

“He needs to keep showing up, doing what he’s been doing,” Dotson said.  “If he doesn’t let everything get to his head.  He will be great.”