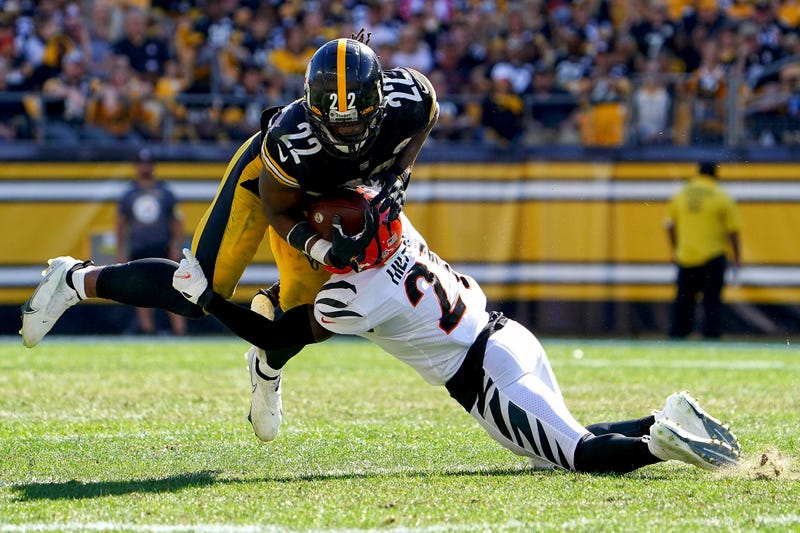 PITTSBURGH (93.7 The Fan) – On a fourth down and 10 from the Bengals 11 yard-line late in the game down two touchdowns. The Steelers ran a dump down pass to Najee Harris. The explanation for that decision.

They ran out of plays.

Wait!  What?  The team that practices goal line situations every practice.  The infamous seven shots.  The team with the Hall of Fame quarterback and new offensive coordinator known for his variety of offensive selections.

They ran out of plays?

“We had fired all of our bullets at that juncture in terms of some of our play selection,” said Steelers head coach Mike Tomlin.  “It just wasn’t a good enough play to get in there.”

Again, what?  There was no red-zone play they could run against the Cincinnati Bengals to give them a better option to score than dumping it down at the line of scrimmage to your rookie tailback?

Didn’t you draft Penn State’s all-time touchdown receptions leader at tight end?  Another tight end, 6’4”, 253 pound Eric Ebron you are paying six million dollars to in his second year.  How about 6’4” Chase Claypool?  Granted Diontae Johnson and JuJu Smith-Schuster were out, but a throw 11 yards short of the goal line?

“They had a picket fine, if you will, because of situation,” Tomlin said.  “They’re going to allow you to probably throw and catch the ball in front of them, but you’ve got to do some things after that.  They had a bunch of guys running along the goal line it happens whenever it’s fourth and goal from the eight or nine or whatever it was.”

“They have a type of defense—we call it a picket fence—where they just sit back,” said quarterback Ben Roethlisberger.  “And we anticipated that. That's what they showed, so we were going to try to get it to him to get guys out front to block for him, see what we could do.  You're a little limited from that far out on what you can do except maybe throw a ball up or, you know, in hindsight, we wish we would have taken a shot in the endzone.  I wish I would have done that.

OK, at least from Ben there was some remorse for the play call.

The focus has been on the offensive line for the struggles scoring points.  That’s as valid as any reason.  It’s hard to overcome struggles on the line.

However, a coach saying they ran out of plays.  That speaks to an issue that is bigger than just the offensive line.