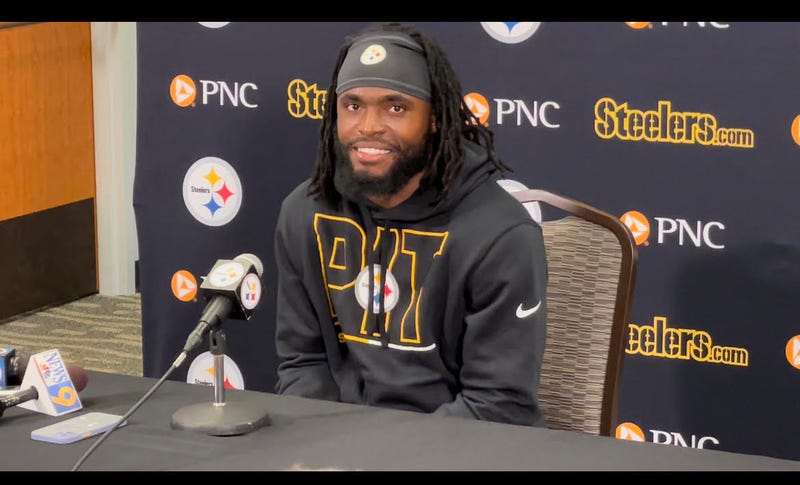 LATROBE, PA (93.7 The Fan) – It seems like simply it was a football player looking to play football again. Steelers receiver Diontae Johnson agrees to a new three-year contract worth nearly $40 million, ending his ‘hold-in’.

“It was a relief for me just getting it done,” Johnson said.  “Just to get back out there with my brothers is a blessing.  I’m happy.”

He said it nearly ten times during his eight-minute media session about how much he wanted to get back out on the field.  Everyone else in his draft class except one got at least a new three-year contract and all but one for $20 million or more.  This essentially is the final year of his rookie contract and then two more seasons at $18 million.

“You see the numbers, I wasn’t trying to look at anyone’s pockets,” Johnson said.  “They deserve that.  I can’t control what they got going on, I’m worried about what I have going on.  I was able to come up with something.  I’m looking forward to getting to work.”

There was the importance to him as well to not just stay with his brothers, but to keep with the team that took a chance on him as a third-round pick out of Toledo in 2019.

“The grass isn’t always greener on the other side, I was thinking about that too,” Johnson said.  “I love being a Steeler.  I love it here.  I want to finish my career here.”

“Being around my teammates, the atmosphere and the energy they show every day.  You want to be around that each and every day.  I feel like I made the right choice, I want to continue to be here for a long time.”

Did he feel like he took less to stay with the Steelers?

“No, I felt like I took the right deal,” Johnson said.  “I’m not worried about what everyone else is making.  The market is up there, but God has something for me at the end of the day.  This is the right deal for me.  I prayed about it.  I’m good.”

He stayed in communication with Mike Tomlin and felt like he handled the ‘hold-in’ the right way.  Johnson wanted to show good energy, saying no one wants to be around someone with bad energy.

“I didn’t want to be out there each and every day having an attitude,” Johnson said.  “That’s not how you carry yourself through this process.  I showed that I wanted to be here.  I love it here.  I want to retire here.”

On his first play of team drills for the season Thursday at St. Vincent College, Johnson caught a deep bomb from Mitch Trubisky. He said he wasn’t motivated on that play to show what he could do, but said he just wants to make plays all year.

“I have been ready to get back out there,” Johnson said. “It’s been boring sitting back watching everyone practice every day.  I was trying to protect myself and get the number I was looking for.”

Lower that what many thought it could get, both sides end up happy.