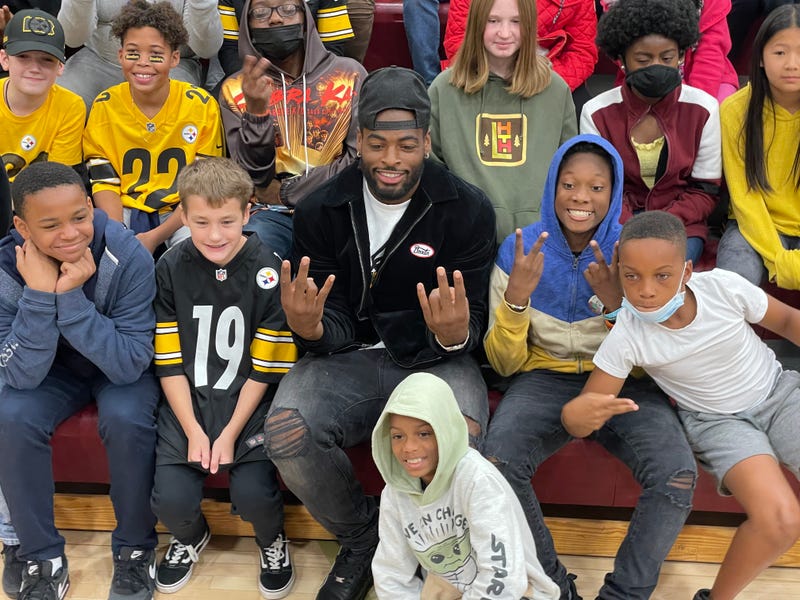 PITTSBURGH (93.7 The Fan) – Off days are precious during an NFL season, especially so coming off a couple of losses. Steelers tailback Najee Harris spent his off-day morning working help some local East Liberty students.

Harris was at the Obama Academy unveiling their Grab and Go breakfast program Tuesday with help from GENYOUth and the American Dairy Association.  A check for $10,000 dollars was presented to the school.  They will use it to buy carts they will fill with breakfast items the kids can ‘grab and go’.  Milk, grains, protein, fruits will all be available as they walk into school to take with them, free of charge.

“Getting meals at school made a big difference, sometimes it was the only source of food,” Harris said recalling his time growing up.  “To come here and make an impact to the kids and show them how important it is to get these meals.  It’s really big.” 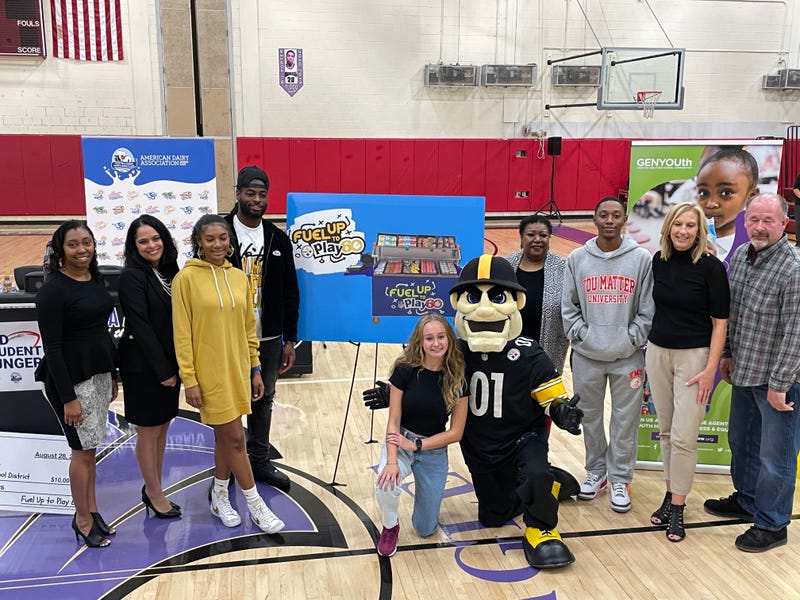 “Najee Harris has been a tremendous advocate for hunger and food insecurity and the importance of school meals,” said GENYOUth CEO Ann Marie Krautheim.  “He’s very passionate about the cause and has been willing to partner with GENYOUth to help share with the community the importance of school meals and support the work we are doing to raise funds to bring more equipment to more schools.”

Both said being able to take breakfast with you eliminates the excuse of not having enough time or potentially the stigma of going to the cafeteria for breakfast. 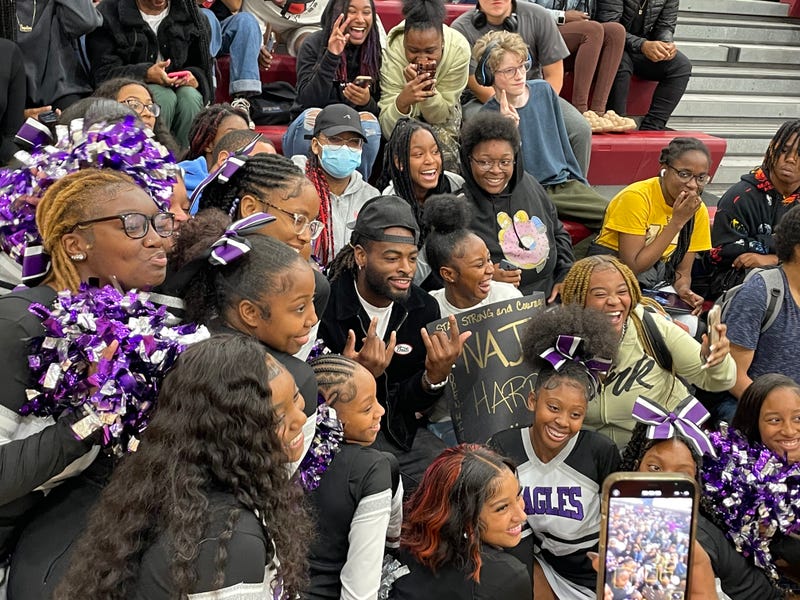 “I always talk about, for me to have this platform to have a good following, I want to show them the importance (of taking advantage of a free breakfast),” Harris said.  “American Dairy and GENYOUth helped make my platform bigger.  Kids are our future in America.  For us to find ways to keep helping them out and make sure they will be tip-top and have the strength in life to move forward.”

Harris said as he stood in the Obama Academy gym with an assembly of students filling each side, he was just a few years removed from being in those stands. 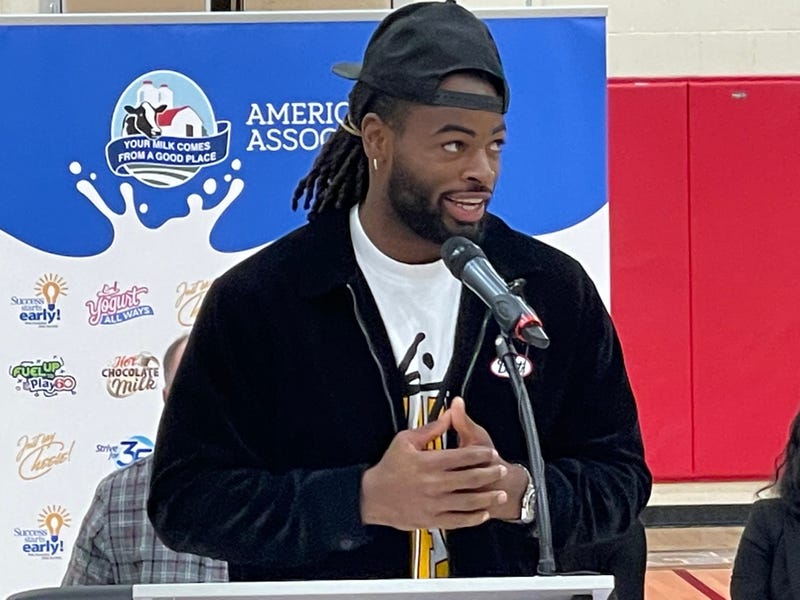 “I think the biggest reason I hope that they relate to me is because I was once in some of these kids’ shoes,” Harris said.  “I can relate to them better.  I can understand what they are going through because not too long ago I was in these bleachers.”

Harris said with COVID restrictions previously he wasn’t able to get out in the community.  Now he’s trying to “meet and do as much as I can and meet the people that can’t be at the game.  I want to come to them.  I think it would be more meaningful for me to come to them.”

When Harris approached one side of the stands, you could see how meaningful it was to the students as they rushed to get an autograph or a picture or just touch a Steelers star. 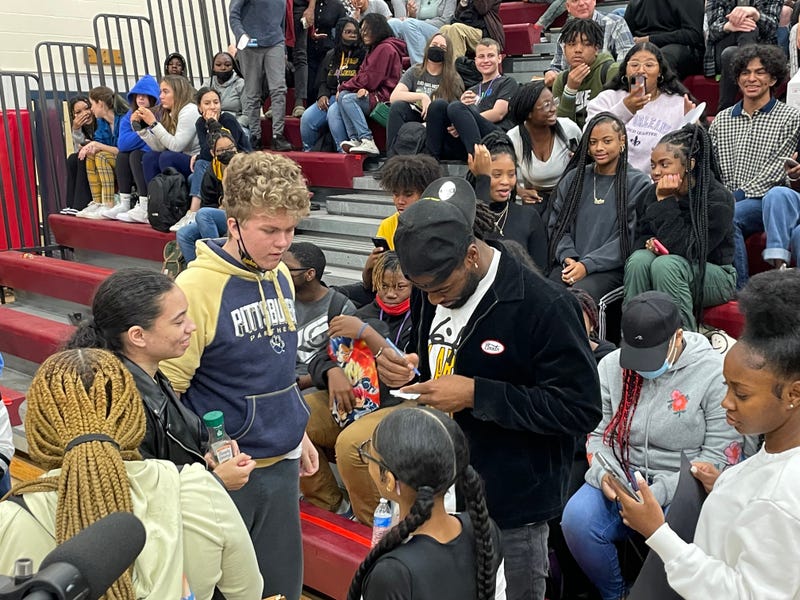 Najee said it was motivating to see kids wearing his jersey, and the hope is the students are similarly motivated to his message and this cause.