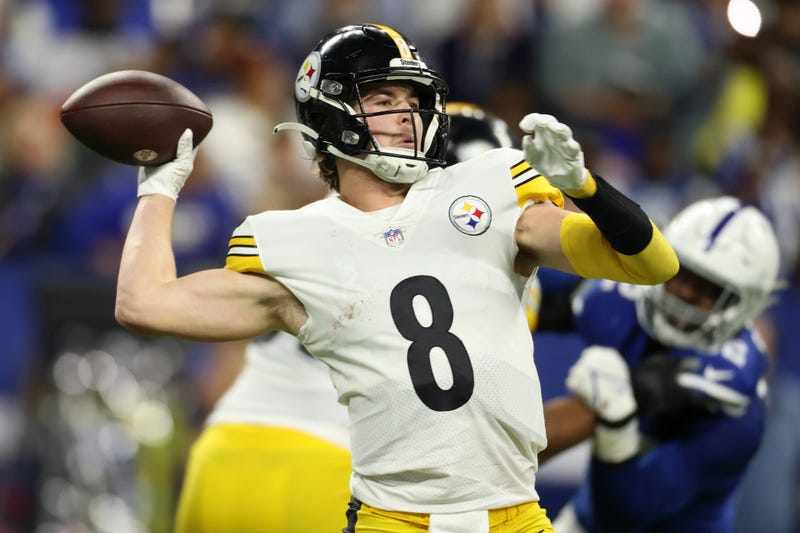 PITTSBURGH (93.7 The Fan) – Even some of the biggest critics are starting to see it, Kenny Pickett is starting to grasp the Steelers offense and to a larger extent the NFL.

“I’m getting more comfortable with the system,” Pickett said Wednesday. “That’s the number one thing. If you’re in a system over a long period of time, you just feel like you’re in a lot more control than when you’re really learning it and you’re learning formations and structure and route combinations that are new to you. Once you get to do that a couple times and you get the rhythm of the game, rhythm of the system, you obviously feel a lot more comfortable that you can go be yourself and play.”

When scoring as many as 20 points seemed like a fantasy a few weeks ago, it’s now 74 points in the last three games. Not the Kansas City Chiefs, but it’s a start. The progression fueled by the Heisman finalist throwing for 638 yards with a touchdown passing and running, not huge numbers, but most importantly, no turnovers.

“I think it’s a gradual progression,” Pickett said. “We had some things not go our way with tipped balls, one in Miami, Chase [Claypool] got his feet tangled up, the Hail Mary versus the Jets… So, there were some things that added to that, but it’s also being smart with the football, putting ourselves in positions to win and not putting our defense in bad situations giving up turnovers. That’s really been the focus since the bye.”

“He’s definitely more aware, playing safe,” said Diontae Johnson. “Trying to not do too much and be himself and let the offense flow. When he’s out there playing like that, we all play well. He’s not forcing, he’s playing comfortable as well.”

Pickett feels he’s done a nice job going through his progressions. Receivers are learning if they are open on any given play, he will get them the ball. He’s not forcing the ball to anyone and he thinks that growth is benefitting all of them.

Atlanta Head Coach Arthur Jones said nothing can replicate the live reps of an NFL game. He believes Pickett has improved week after week and some of that improvement is dealing with what is often labeled as the ‘speed of the game’.

“I think everyone just talks about the speed of players and the speed of the game is faster (from college to the NFL),” Pickett said. “And that's true, definitely, everyone's faster. But I think as a rookie coming in, one, you're learning a new system, and two, you're going against a lot more defenses than you're used to in college. So, I think when people think, from a quarterback standpoint at least, just talking about when the game moves faster, there's a lot more going on mentally. So, that's why I think it feels a lot faster than it really truly is just on the physical standpoint of it.”

The rookie first-round pick then expanded on what he meant.

“In college, you get in the flow of the game,” Pickett said. “You're going to see the same look multiple times and when you make sideline adjustments on it, you can almost guarantee that you're going to get that same look that you saw earlier in the game.”

“I think at this level, you're going to see multiple looks of the same formation structurally that we have. So, I think there's just a higher volume in the game plan of defenses in the NFL based off of college and that's just the main difference that I've seen. So, in terms of the speed of the game, like I said, it's not so much for me the physical piece of it with guys and their speed. It's the mental processing of, you know, first off, what's our game plan? How do we want to attack them and then all the different things that they do that just speed your mind up?”

“So, now that I'm getting more comfortable in our system, I feel like the game is slowing down a little bit for me, and I'm able to play more comfortably.”

Mike Tomlin has said in nearly every news conference over the last few weeks he would expect the progression to continue. It’s why it was too soon to pass judgment on Pickett and really, still is.