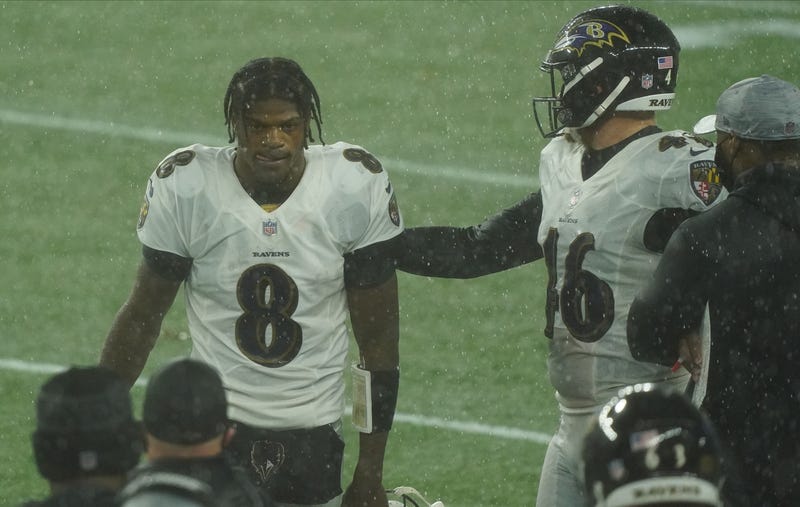 PITTSBURGH (93.7 The Fan) – The cliché is to throw records out when playing rivals. That would be welcome news to the Ravens because their record is one win since losing to the Steelers at home the first of this month.

“It’s always hard losing,” said offensive lineman Orlando Brown.  “It doesn’t matter the sport you are playing.  It’s not easy.  I think this team has a bunch of fighters.  We got a bunch of men that love this game, that love to play for each other.  We have to find a way to finish games and start pulling away.”

Tackling has been an issue, as the Ravens have allowed 173 yards rushing in each of their last two losses and exaggerated by watching Derrick Henry run through their line in overtime for the game-winner on Sunday.

“Doesn’t really matter how difficult it is, it’s something we need to get done,” said head coach John Harbaugh.

“The Ravens were the top team last year,” Wolfe said.  “We have the returning MVP at quarterback.  We’ve got a bullseye on us.  We got to bring out A game cause everyone else is going to bring their A game.”

That MVP has thrown four interceptions with three fumbles in Baltimore’s last three losses.  Lamar Jackson has also failed to lead his team back when trailing.

“Focus, Keep our head up,” Jackson said.  “We faced adverse situations my rookie year and we turned the situation around and people were doubting us then.  I feel like people want us to lose.”

“We just have to bounce back, we’re good.  It’s a rival game come Thursday and we turn it up there.”

“This is a great team, Pittsburgh, best team in the NFL,” Brown said.  “They got a great front.  We just have to prepare and most importantly get our minds right for a physical dog fight.”

Ravens not only are on a losing streak, they are a game out of the post-season and a game behind the Browns.  If Baltimore were to lose to the Steelers on Thursday, there is no way the Ravens could three-peat as winners of the AFC North.