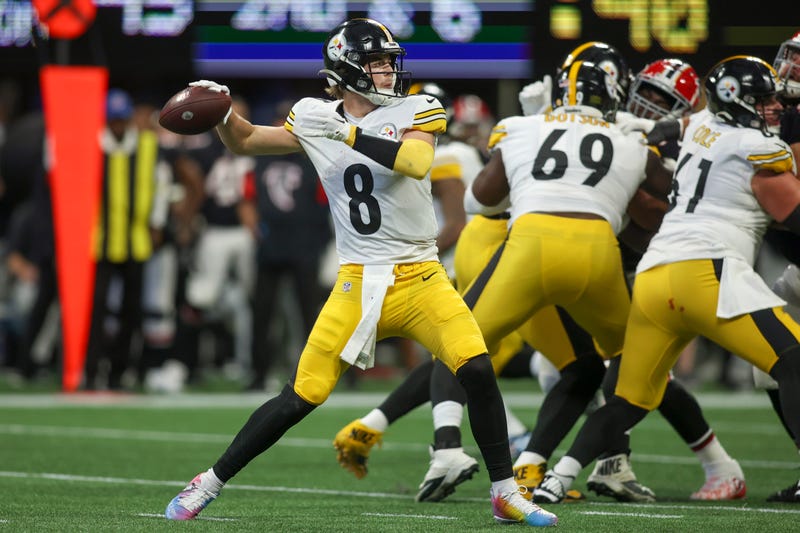 The Pittsburgh Steelers improve to 5-7 in a week 13 win over the Atlanta Falcons by a score of 19-16.

The Steelers got the game started with a long drive that resulted in a 46-yard field goal attempt knocked down by Matt Wright to give them an early 3-0 lead.

Marcus Mariota and the Falcons wouldn’t be able to get anything done with their first drive and get the ball back in Kenny Pickett’s hands who started grooving before the end of the first quarter.

The Steelers would pick up the second quarter knocking down another 46-yard field goal from Wright, scoring on back to back drives, for a 6-0 game.

The Falcons started their second drive of the game strong as well, before a huge sack from Cam Heyward to force them to knock down a long 50-yard field goal to make it 6-3.

Pickett and the Steelers responded with a big 57-yard reception from Pat Freiermuth, then capitalizing through Connor Heyward for their first touchdown of them game, increasing the lead to 13-3.

Just before the half, the two teams traded field goals again on a 51-yard attempt by Koo for the falcons and a 48-yard attempt by Wright, brining it to 16-6 at the half.

The Steelers weren’t done there though. They came out hot to start the third quarter, only to be stopped again for 33-yard field goal from Wright to boost them to a 19-6 lead.

It was then comeback time for the Falcons. They looked sharp closing out the third quarter with a diving touchdown from MyCole Pruitt, closing in for a 19-13 score.

They weren’t done there as they almost recovered a fumble from the Steelers to start the fourth and score through Koo again to make it a 3-point game at 19-16.

The Steelers couldn’t find the means to advance in the final 5 minutes and handit back to the Falcons with a chance to get something done quick within the final minute of the game.

But, it would quickly be put to bed after Mariota’s first throw of the attempted drive got picked off by Minkah Fitzpatrick to seal the 19-16 win in week 13.

Tight End Pat Freiermuth had 76 yards over three receptions, and Connor Heyward had the team's lone TD on his only reception.