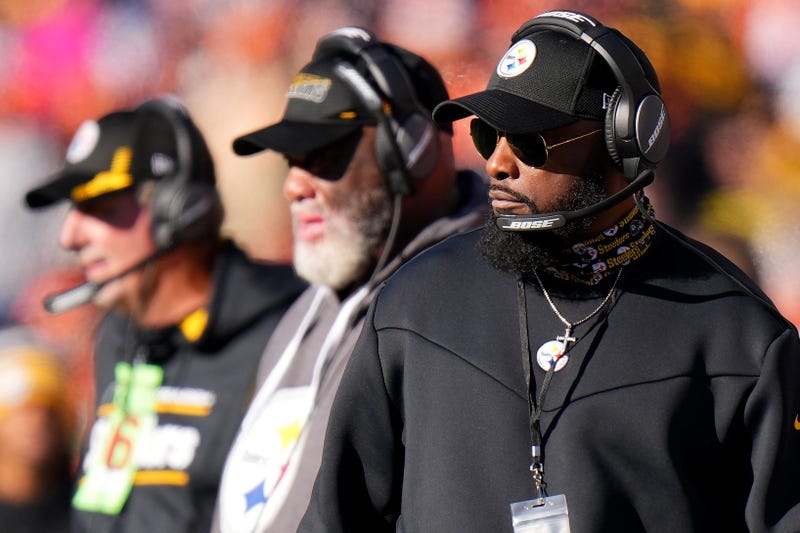 PITTSBURGH (93.7 The Fan) – Mike Tomlin said during his weekly press conference Tuesday that personnel and scheme changes, while nothing dramatic is expected, are coming this Sunday against the Baltimore Ravens.

You don’t really think the Steelers have been holding back players from playing.  They are starting essentially their entire rookie class right now.

If the Steelers are going to make changes, they first have to have a serious determination of where they are this season.  Are they really a current .500 team that could go on a run with a schedule of playing Baltimore twice, Cleveland, Tennessee and at the Chiefs and Vikings.  If they believe that, here are the changes they could make

Zach Banner at right tackle-originally the starter for this year and last before an ACL tear ruined 2020 and the first half of 2021.  Put Banner in there and not just his ability to run block, but Banner has a presence.  He brings an attitude and energy that could be infectious to a young group that is playing this long for the first time in their lives and likely more banged up than ever in their careers.

Ahkello Witherspoon at corner-this is assuming Joe Haden remains out with his foot injury.  Witherspoon has more reps in the league and while he struggles on special teams, just don’t play him on special teams and see if he can play corner for this team.

Most want Devin Bush out, but realistically with Robert Spillane’s injury, he stays.  Are you going to dress rookie Buddy Johnson for the third time this season, put the fifth rounder with no career tackles in against the Ravens?  There is Ulysees Gilbert, he’s played every game, but rarely if ever on defense.  If you are trying to win now, like it or not, Bush is the better option.

That’s it, if you are trying to win now.  Those are the changes you can make.

If you have decided the playoffs are a fantasy.  You can have different thoughts.

See if Zach Banner can play for the reasons listed above.

Mix in Cody White and see if he could be a possession receiver for you.  This isn’t a huge-impact move, but you likely won’t have JuJu Smith-Schuster and Ray-Ray McCloud isn’t the answer.  See if this once promising player who left school too early can show you something.  He catches everything in practice & works hard.

Play Anthony McFarland as the second tailback.  Limit Harris’ reps, you know what he is, save his NFL life expectancy.  There is enough tape on Benny Snell and Kalen Ballage, see if McFarland can play in the NFL or not.  He’s the only change-of-pace back you have.  Does he have value?

Offensive lineman John Leglue is intriguing to me.  He doesn’t have a lot of reps in game settings, but his size and versatility warrant a shot.  The Broncos, Saints and Packers have kicked the tires on the 6’7”, 310-pound, 25-year-old out of Tulane.  He played everywhere along the line-including center at training camp.  In college, Leglue started games at right & left tackle, right guard and center.  See what this kid has, maybe he’s the next Matt Feiler.

I would roll Devin Bush out there every snap.  Tell him to go learn and grow.  Play him every snap and challenge him to get better.  You don’t have a better option, see if he can use the last six games to pull it together.

Play James Pierre, he’s struggled, but he might be an answer at corner.  If you are playing for the future, see how he responds to adversity.

Give linebacker Buddy Johnson reps in place of Schobert at times.  Open that door for the last rookie in the class that isn’t making an impact and pull back on Schobert’s use.

Safety Tre Norwood starts or at least reps next to Minkah Fitzpatrick or consider moving Marcus Allen back into more of a safety role.  Another option, play Karl Joseph next to Minkah.  He’s a former first round pick, maybe he jump-starts his career with the Steelers.  Hard to believe Terrell Edmunds will be here next season, see what they have.

Bring in punters for tryouts, let Pressley Harvin know that being 32nd in the league in punting average isn’t good enough.  The standard is the standard, right?  Make him live up to it.

You don’t have to just do this at punter.  Challenge this team in a Bill Belichick way of bringing in hungry players currently out-of-the-league for tryouts that are done while practice is going on.  Let these players know that everyone is replaceable.  Make them feel uneasy about their future.  They’re grown men, challenge them as such.

These are ideas, but as stated earlier, there are no redshirt freshmen waiting to save the day for the 2021 Pittsburgh Steelers.