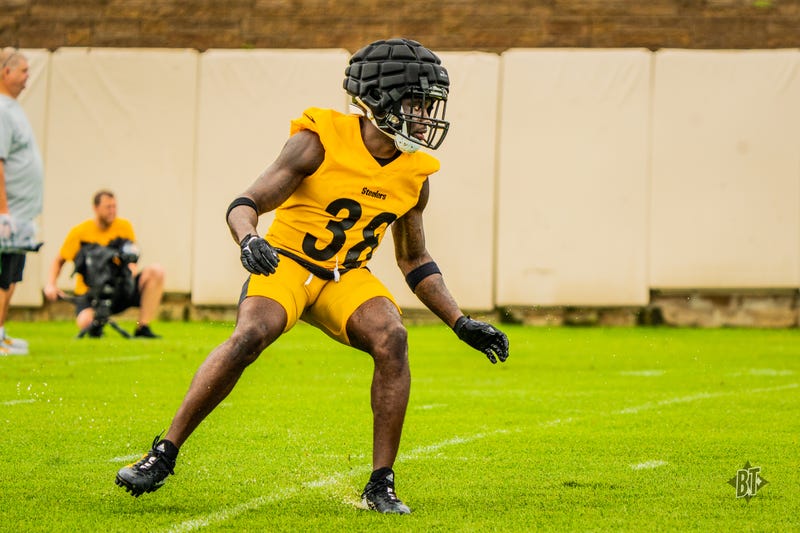 LATROBE, PA (93.7 The Fan) – He came out of West Virginia looking like a surefire decade long NFL-er, now after spending last year mostly on the Steelers practice squad Karl Joseph is just trying to secure a job.

The 28-year-old safety picked up after last cuts in September of last season, Joseph said he really searched for his fit with the Steelers.  He admitted his head was spinning trying to figure out his role and played in only two games in 2021.  He says it’s a night-and-day difference for him now having the entire offseason to prepare.

Drafted by the Raiders in the first round in 2016, Joseph played in 49 games mostly at strong safety with 41 starts.  He had 236 tackles, four interceptions, 15 pass breakups and nine tackles for loss in four years.  His career there ended on injured reserve with an ankle injury.  He would play 14 games (8 starts) for Cleveland in 2020, missing time due to COVID-19 finishing with 67 tackles and a pick.  He would sign back with the Raiders the following season, only to be released.

Fast forward to this week and a couple of solid practices in a row with some pass breakups and showing the ability to play multiple positions-slot, outside, centerfield.  He’ll do whatever the team needs and likely will have to make it showing an ability to play special teams.

“Everybody is competing,” Joseph said.  “We have a lot of guys that can do different things on defense.  We are all rotating.  We have a very competitive group.  It will be who excels and separates themselves in preseason games.”

The first opportunity comes up on Saturday.  He likely will get a good run with Minkah Fitzpatrick unlikely to play and Terrell Edmunds getting limited reps, if any.

“I’m excited,” Joseph said.  “Excited to go out and compete and show them what I can do.  What I can bring to the table.”

It’s already been a big month for Joseph.  He and his family welcomed in his first son born last week.  Joseph thanked the Steelers and Mike Tomlin for allowing him to be excused a few days of camp to be there for the birth.

“Definitely a little more motivation, especially after you miss some days,” Joseph said.  “I came back very hungry, ready to get back in the swing of things.  Show the coaches that this is important for me too.”