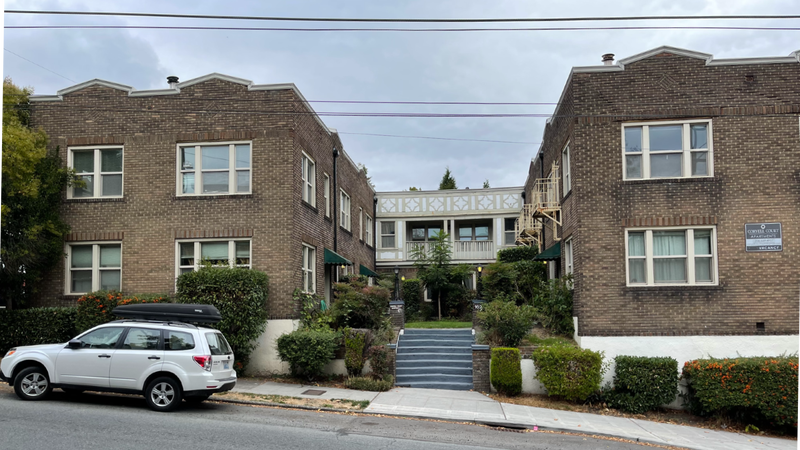 That Tom Hanks/Meg Ryan rom-com from 1993 did show off our city pretty beautifully, from houseboats on Lake Union to Pike Place Market. (Although anybody who lives here noticed that weird geography glitch when Hanks and his movie son zip in a small boat from South Lake Union over to Alki Beach in West Seattle in no time -- a trip that would actually require passing through the Ballard Locks.)

There are plenty of movies set in Seattle, although in modern times many of them were actually filmed in Vancouver, which is pretty easy for us locals to spot.

Seattle's Famous Film Locations is a page that highlights movies and TV shows that did go to the expense and effort to shoot in the actual Seattle at least a little bit, and it shows. They single out Frasier and Grey's Anatomy for at least sending film crews here to capture lots of locations and local flavor, like Meredith Grey's house on Queen Anne and the Frasier episode in Season 5 which was shot all over Seattle as Frasier and Niles wandered among landmarks like Pike Place Market, the Monorail, and the Space Needle.

That site also mentions Singles, the 1992 classic that captures a more innocent Seattle early in the Grunge era. Bridget Fonda's character Janet lived in the apartment building pictured above, on Capitol Hill. Maybe you remember this scene when Matt Dillon's Cliff tried to win her back by showing off the new sound system he installed in her car:

YoAll through Singles, you'll see Gasworks Park, Capitol Hill, landmark restaurants and bars like Chandler's Crabhouse, ReBar, the OK Hotel, and El Corazon, plus some very charming scenes with young Eddie Vedder and some of his fellow Grunge pioneers, including the late Chris Cornell. Singles captures a moment in history that seems like a million years ago, but it still holds up and will make you nostalgic for a simpler time in the Northwest.

Then there's 10 Things I Hate About You (starring a young Heath Ledger, plus the Fremont Troll,) and Say Anything (featuring a quick look at Bob's Java Jive, aka the giant coffee pot, in Tacoma.)

Movies Filmed in Seattle and Tacoma is a guide to locations you can visit around here, giving you the address of the Sleepless in Seattle houseboat, and running down locations from Disclosure (starring Michael Douglas, Demi Moore, the Bainbridge Island ferry and a tech company office in Pioneer Square.) This page also features some more obscure classics like The Fabulous Baker Boys, Prefontaine, and It Happened At The World's Fair, a 1963 Elvis Presley film set against the backdrop of Seattle Center and (duh) the 1962 World's Fair.

The website Thrillist lists The Most Famous FIlm Landmarks in Seattle, which includes many of the above plus more obscure movies like The Ring (filmed all over the place and featuring some gorgeously creepy footage of Deception Pass on the tip of Whidbey Island,) Little Buddha, World's Greatest Dad, and the horror miniseries Rose Red, filmed at Thornewood Castle in Tacoma, which is now a working inn where you can actually stay, if you dare.

I have to give honorable mention to a great Seattle film director, Lynn Shelton, who died in 2020 at the age of 54. She directed a ton of films and shot almost everything in and around Seattle. She loved this part of the world and was proud to show it off in her movies. Her stuff is quirky, funny, and very human. You can't go wrong spending some time with the films and TV work of Lynn Shelton.

If you're itching to hit the road but hesitant to wander too far from home due to that darn you-know-what that won't quit, why not take a mini-road trip to track down a few of these cinematic landmarks. Or even easier, just track down the movies themselves and park your family on the couch for a PNW film festival.